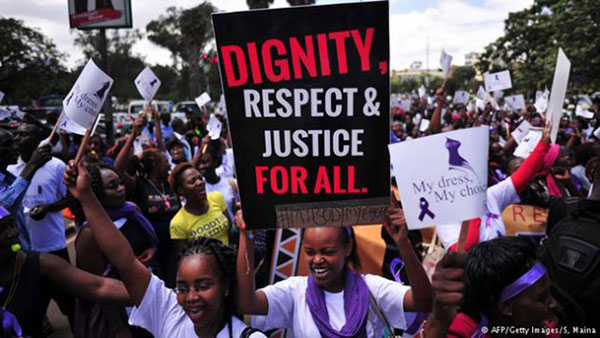 A rally against violence to women in 2014 in Nairobi, Kenya.

Let’s Unite To End Violence Against Women In Kenya

NAIROBI, Kenya, November 25, 2016 (IPS) — Consider this. According to the 2014 Kenya Demographic and Health Survey of Kenya, 4 out of every 10 Kenyan women undergo some form of violence, whether physical or sexual. This figure is staggering and should compel us to pause and reflect.

Today, on the International day for the Elimination of Violence against Women, let us join together to say: enough is enough!

Gender Based Violence, including domestic and sexual violence, human trafficking and harmful practices, such as forced child marriage and Female Genital Mutilation (FGM) is still endemic in Kenya, despite the existence of legislation, administrative directives, judicial sanctions, and awareness-raising efforts by a variety of agencies and the government.

It is time for every man to start doing something to end the scourge of violence against women and girls in their homes and communities. A call to action was made by the President of Kenya, HE Mr Uhuru Kenyatta when he urged every citizen to join the government’s efforts to end violence against women and girls during the #HeForShe (a solidarity movement for gender equality) launch in November 2014.

The #HeForShe campaign aims to bring home the message that although laws exist to deal with gender violence and guarantee gender equality, every man must take personal responsibility to root out the vice of gender discrimination in his home. Only then can a society begin to take a stand together to bring to an end injustice committed against women and girls, denying them basic human rights such as a life in dignity, choice and freedom.

Did you know that gender inequality is costing sub-Saharan Africa on average US$ 95 billion a year, peaking at US$105 billion in 2014– or six percent of the region’s GDP – jeopardising the continent’s efforts for inclusive human development and economic growth, according to UNDP’s Africa Human Development Report 2016.

Violence and discriminative structures contribute to keeping women out of the workforce, thus dragging down women, their families, and entire communities for generations, in Kenya and elsewhere. For Kenya to reach the goals enshrined in Vision 2030 the potential of all Kenyans, women and men, have to be realized.

Kenya is at a demographic transformation. Fertility levels are declining gradually and Kenyans are living longer. There is reason for optimism that Kenya can benefit from a demographic dividend within 15 to 20 years. It is estimated that Kenya’s working age population will grow to 73 percent by year 2050, bolstering the country’s GDP per capita 12 times higher than the present, with nearly 90 percent of the working age in employment. (NCPD Policy Brief: Demographic dividend opportunities for Kenya, July 2014.)

For this to happen women have to join the work force. So improvements in health and nutrition status, especially of girls, women and children, is critical. Appropriate education and skills will enable them to participate in the economy and provide needed labor for its growth. In addition, studies have shown that girls’ education particularly secondary level, and empowerment will delay early marriage and slow adolescent fertility.

Cultural, social and economic barriers that hinder empowerment of girls and women must be addressed and we have to raise our voices to end the scourge of violence against women and girls.

Women are half of Kenya’s demographic dividend; if they are given the right tools and community support, they can not only become financially independent, but be the engines that fuel Kenya’s future growth.

So we need to continue to raise awareness – in Kenya, in the EU, and around the world – to provide information and raise awareness about violence against women, targeting the general public as well as professionals who can help change this situation: police officers, teachers, doctors, judges amongst others. And beyond raising awareness, Kenya has for the first time formulated a comprehensive framework encompassing practical interventions that we hope will drastically reduce cases of Gender-Based Violence.

We must, once and for all, say no to this clear violation of our fundamental rights. All women and girls should be able to lead a life free from fear and violence: in Kenya, in the European Union, and everywhere in the world.

Sicily Kariuki, is the Cabinet Secretary for Gender, Youth and Public Service in the Government of Kenya, Siddharth Chatterjee is the United Nations Resident Coordinator in Kenya and Stefano A. Dejak is the European Union Ambassador to Kenya.