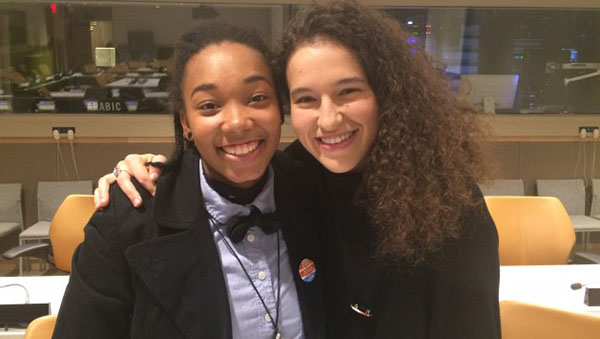 Speaking Out On Sexism And Violence Through Hip-Hop

UNITED NATIONS, New York November 23, 2016 (IPS) — Young women are beginning to find their voices around issues such as sexism and violence, including through hip-hop, an art-form which has a long tradition of fighting oppression.

Johnna Artis, 20, a first apprentice of H+ the Hip-Hop Dance Conservatory told IPS about how she has learnt to express herself and gained confidence through dance.

Growing up Artis says she felt that she often silenced her own voice, but she has become more confident to speak out, particularly she says, since she has learned that sharing her own experiences can help others.

“I’m talking more and I’m interacting more, so it’s a process, but I’m getting out of the silence,” she said.

Artis, originally from Brooklyn, New York, is one of 25 hip-hop dancers at the conservatory, who rehearse for four to six hours, six days a week.

Artis’ teacher, Maria Fraguas Jover, 24, Rehearsal Director at the Hip-Hop Dance Conservatory told IPS that while female dancers like Artis are learning to express themselves through hip-hop this is not how it has always been.

“Hip-hop was created by men, dominated by men, just the way the world has been. It’s a patriarchal society, so really hip-hop is just a microcosm of that.”

“(Hip-hop) has been a voice for the oppressed always,” — Maria Fraguas Jover

Hip-hop has a long tradition of addressing oppression, although it has traditionally also been a largely male art-form.

“(Hip-hop) has been a voice for the oppressed always,” said Jover, including Caribbean immigrants in the U.S. and other Black Americans, only historically these have mostly been male voices.

By involving more women, the conservatory has been able to add sexism to the issues they address, added Jover.

“When you come to our performances that’s pretty much all we’re talking about: racism, sexism, misogyny, and we do it in entertaining ways too, to open up the conversation.”

“(Women) having a voice in hip-hop means that we can speak to men in hip-hop and tell them that we don’t feel safe, and you’re not a terrible person but this is what you need to do and it is in your power to change this.”

But she noted that it is not only up to women to address gender-based violence.

“Us having a voice does something, but the people who really do have the power to change their own oppressive powers and mentalities are men, so then that goes to men speaking to other men (too).”

Members of the conservatory attended a special event at UN headquarters ahead of the International Day for Eliminating Violence Against Women which is celebrated on November 25 each year.

The event, organised by UN Women, focused on young people, who due to their age and often less independent economic status, are particularly vulnerable to gender-based violence. This is in part because at this stage in their lives they are yet to learn to express themselves or to know what a healthy relationship should look like.

Safi Thomas, Artistic Director and founder of the Conservatory told IPS that adults often discourage young people from having a voice.

“We often silence them, through authority bias, through diminishing their words, by not listening to them, by not giving credence to their words,” he said.

This means he says, that young people can find it difficult to feel safe to speak out when they are experiencing violence “be it bullying, be it abuse, be it sexual assault, be it rape.”

As Artis describes, speaking out could mean simply being able to discuss different ideas about what a healthy relationship should look like.

“Having people talk about different relationships and how we can interact with people is very important because if we only know one thing we don’t know that there is something else possible,” explained Artis.

Finding a voice is particularly important for young women many of whom fear speaking out because society continues to blame victims rather than the perpetrators of sexual violence.

Although young women are increasingly speaking out against gender-based violence, progress is slow and in some cases, countries are still moving backwards.

This past week legislators in Turkey were considering a bill, which could see girls who are victims of rape forced to marry their rapists. The bill was knocked back following protests.

Meanwhile, in the U.S. men, and particularly young white men, are being radicalised in online discussion groups to hold both sexist and racist views, as observed by writer, Siyanda Mohutsiwa, on Twitter, following the election of Donald Trump as U.S. President.