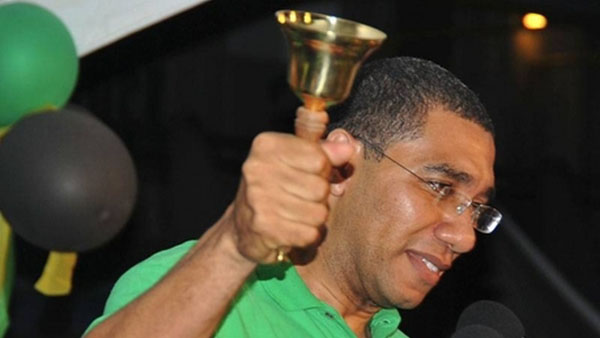 The opposition People’s National Party (PNP) that previously controlled the councils, won in the parishes of Hanover, Manchester, Westmoreland, St. Catherine and the Portmore Municipal Council.

However in the eastern parish of St. Thomas – the vote is tied. As it relates to the tie, Director of Elections, Orrette Fisher, said the party with the popular vote (the JLP) will select the Mayor, while the PNP Councillors will select the Deputy Mayor.

In the Portmore Municipality, voters were given the opportunity to select the Mayor directly. Leon Thomas of the PNP won with 12,939 votes, while the JLP’s Keith Blake got 11,182 votes.

Following the announcement of the outcome, late Monday, Prime Minister, Andrew Holness, told JLP supporters at the party’s Belmont Road headquarters in the business district of New Kingston, that this is an endorsement of the government’s performance since winning the February general election.

“Jamaica is saying you have performed – but we are not taking it for granted, we are going to work even harder, because the situation at the central government is still tight and there is no room for error or complacency,” Holness said.

The Prime Minister further noted that the victory is also an indication that the government is on the right path to transform and grow the country.

He said that with this win, the Councillors must understand that the growth is to be transferred to the community through better roads, jobs, the cleaning of drains, and the maintenance of the parks and markets.

While supporters of the JLP celebrated at the party’s headquarters and across the island, it was a subdued atmosphere at the Corporate Area headquarters of PNP, where party leader, Portia Simpson Miller, was noticeably absent.

In addressing the small crowd, PNP General Secretary, Paul Burke, said the party had inadequate funds going into the election.

“We went into this election almost on a zero budget….we are not blaming anybody but ourselves. With the little that you had, you did a tremendous job. We had to work against a J$600-million (One Jamaica dollar =US$0.008 cents) de-bushing program of which $300 million was paid out last Friday, three days ahead of the election. So we have some serious work to do…”Burke said.

Concerning its defeat at the polls, Deputy General Secretary of the PNP, Julian Robinson, said a review of the party’s performance will be conducted.

“We have lost the majority of the parish councils. Right now there are four councils that, based on the preliminary results, we would have one. There are a number of others that are very close, which we will know the results of. As a party we will obviously have to do some introspection to examine the performance,” he said.

In Monday’s poll, 489 candidates competed for 228 divisions. The preliminary results state that the JLP won 131 divisions to the PNP’s 97.

The final count of the ballots began on yesterday morning.