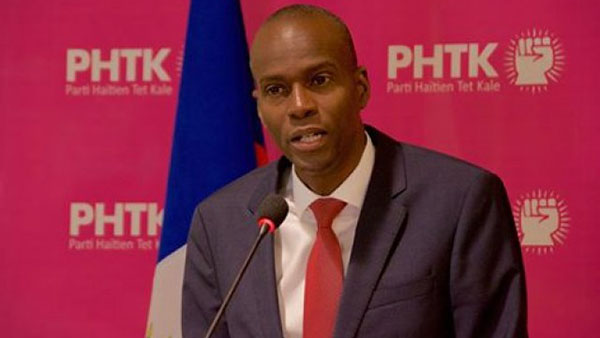 Haiti President, Jovenel Moise, has started efforts to hold a national dialogue on the situation, including meeting with the former Provisional President, Jocelerme Privert, as part of the initiative.

WASHINGTON, D.C. November 30,2016 (CMC) – The Organization of American States (OAS) says the preliminary results in the November 20 presidential election in Haiti are “in line” with data collected by its own observation mission.

“The preliminary results show significant margins between the number of votes obtained by the candidates contesting the election, and are in line with data collected by OAS observers at polling stations on Election Day,” the OAS said in a statement.

Plantation owner, Jovenel Moise, a member of the PHTK, or the Bald Heads Party, has been declared winner of the presidential election, the Provisional Electoral Council (CEP) has said.

“The Haitian people made its choice and elected me in the first round. Now, in a spirit of gathering, I invite you, dear compatriots, to borrow with me the road of endogenous development for a Haiti to the height of its historical performances and its legitimate ambitions,” Moise said in a statement.

In a message former president, Michel Martelly, said “The response that the population has given is a response that simply means that it understands his message (of Jovenel) that it understands the project that he has for Haiti and that it believes in him, while former prime minister, Evans Paul, said “I say congratulations to the government and to the CEP who finally composed with the truth instead of decomposing into the lie.”

“My brothers and sisters, it is together that we will change Haiti, it is together that we must work to allow every Haitian to live better. I appeal to the youth of the country, to all the Haitians who live abroad, to all the professionals of the country, to engage at my side to put the country upright, because Haiti is on its knees,” Moise said, adding “I have a special thought for each of my competitors, every citizen who was a candidate because they have a project for Haiti”.

The other presidential candidates, Jean-Charles Moïse, of the Pitit Dessalines, received 118,142 votes or 11.04 per cent; while Maryse Narcisse, of the Fanmi Lavalas, and who was a spokeswoman for former president, Jean Bertrand Aristide, received 96,121 votes, or 8.99 per cent, of the popular votes.

The OAS said its Electoral Observer Mission (EOM) “has maintained a constant presence at the Tabulation Center (CTV) since Election Day”.

“A team of 10 experts has observed the tabulation process around the clock – in shifts of six hours -reporting that activities at the CTV were carried out according to the established procedures,” the OAS said.

It said the mission observed “substantial advances” both on Election Day and during the tabulation phase, compared with prior electoral processes.

“The mission highlights and welcomes the greater national involvement and ownership of the process. These improvements implemented by the Haitian authorities should be a source of pride and motivation for the country to continue down this path.”

The OAS said the EOM will remain in Haiti to observe the next phases of the electoral process.

“During this time, the EOM calls upon all actors to respect the will of the Haitian citizens, expressed emphatically through the polls,” the OAS said.

After observing over 300 polling stations during Haiti’s presidential and legislative elections, the Caribbean Community (CARICOM) Election Observer Mission (CEOM) also declared “general satisfaction” with the conduct of the poll in the French-speaking CARICOM member-state.

In its first post-elections statement, the mission reported that the officers of CEP “not only displayed an improved competence, but a uniform execution of their duties”.

No runoff will apparently be needed, because Moise, an agricultural entrepreneur and candidate of former President Michel Martelly’s Tet Kale party, got over 50 percent in balloting.

He led his nearest rival by well over 25 percentage points. The result was enough to win under Haiti’s election rules.

The final count will be turned over to Haiti’s electoral tribunal, where political parties can dispute the results before winners are certified December 29.

The election was needed to restore constitutional order in Haiti, which has been led by a provisional government for nearly a year because Martelly’s mandate expired before elections could be completed.