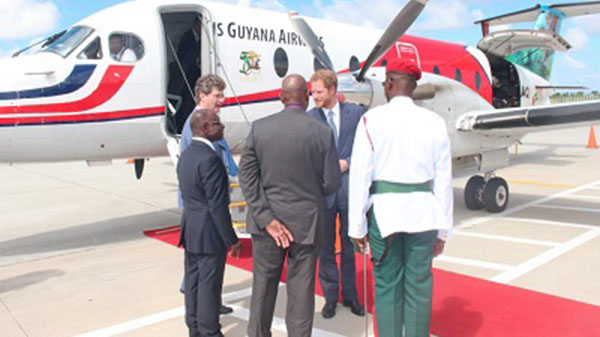 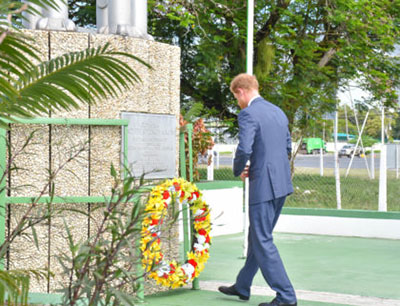 Prince Harry lays a wreath at the Independent Arch at Brickdam. The Independence Arch can be described as one of the nation’s most important national symbols.

Prince Harry, who flew in from Barbados, where he participated in the 50th anniversary of political independence of that Caribbean Community (CARICOM), also met with President David Granger at the Ministry of the Presidency and toured the Guyana Defence Force (GDF).

He was met on arrival at the Eugene Correia Airport, on the outskirts of the capital, by Foreign Minister Carl Greenidge and British High Commissioner, Greg Quinn, with the GDF military band playing in the background.

As he made his way into the capital, a small group of protestors demanding reparation from Britain over the slave trade, staged a peaceful protest.

Among the placards carried by the protestors was one that read “British empire was built on the backs of our ancestors”, while another claimed that “Britain encouraged racial division in Guyana”.

On Saturday, Prince Harry, who is on his first-ever visit to Guyana, will visit the Kaieteur Falls, the single largest free-fall waterfall in the world, with a drop of 741 feet, and will also will visit Joshua House Children’s Centre on Sunday. 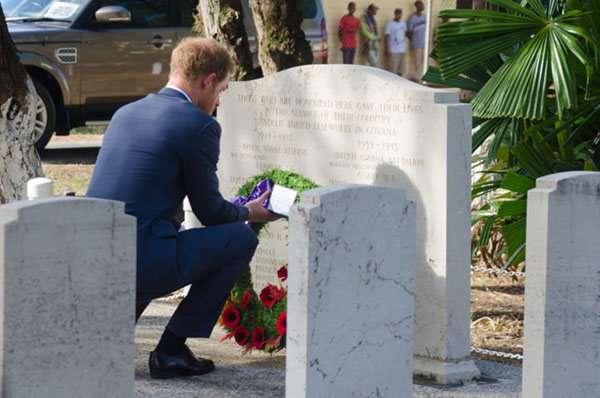 Prior to his arrival in the Caribbean, London said Prince Harry is honoured to be visiting the region in the year of The Queen’s 90th birthday, and to continue to develop The Royal Family’s strong bonds with the people of these important Commonwealth countries.

“While these Caribbean countries may be relatively small in size, each has more than their fair share of natural wonders, inspiring individuals and unique cultures, which His Royal Highness will experience during this two week tour,” the official statement added.