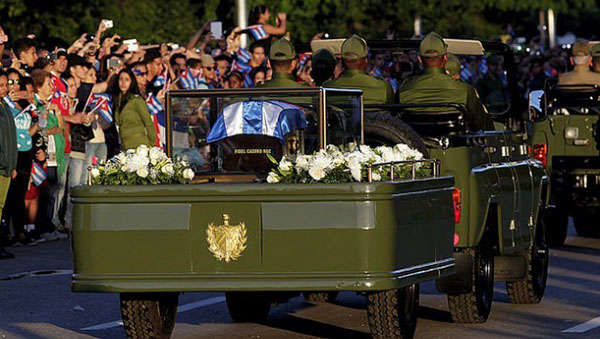 The urn holding the ashes of Fidel Castro is seen covered by a Cuban flag on a military jeep on Nov. 30, at the start of an 800-km funeral procession that will reach a cemetery in Santiago de Cuba on Dec. 4. Photo credit: Jorge Luis Baños/IPS.

RIO DE JANEIRO, Brazil December 2, 2016 (IPS) — Among the many leaders who left their mark on history in the 20th century, Fidel Castro – who died Nov. 25 at the age of 90 – stood out for propelling Cuba into a global role that was unexpectedly prominent for a small country, in an era when arms were frequently taken up to settle national and international disputes.

The Cold War imposed certain political choices as well as the consequences in terms of hostilities. By choosing Communism as its path in 1961, two years after the triumph of the revolution, Cuba became a pawn that infiltrated the enemy chessboard, facing the risks posed by such a vulnerable and threatening position.

In Latin America, the “Western, Christian” side mainly degenerated into military dictatorships, nearly all of them anti-Communist and with direct links to the United States, with a few exceptions like the progressive government of General Juan Velasco Alvarado in Peru (1968-1975).

On the other side, guerrilla movements supported or stimulated by Cuba, like the 1966-1967 incursion led by Argentine-Cuban revolutionary Ernesto “Che” Guevara in Bolivia, mushroomed. The military defeat of these movements was a general, but not absolute, rule.

For example, there was the Sandinista triumph in Nicaragua in 1979, and in Colombia the half-decade conflict raged until this year, when a peace deal was finally signed by the government and the FARC (Revolutionary Armed Forces of Colombia) rebels.

The armed conflicts were not limited to the countries of Latin America. The Vietnam war shook the world in the late 1960s and early 1970s. The Communist victory over U.S. forces prevented another country from being split in two, like Korea or Germany.

In Africa, the decolonisation of some countries cost rivers of blood. Algeria, for example, won its independence from France in 1962 after a war that left a death toll of 1.5 million, according to the Algerians, or just over one-third of that number, according to the French.

Against this backdrop, Castro led an incredible set of accomplishments that earned Cuba a projection and influence far out of proportion to the size of a country of fewer than 10 million people up to 1980 and 11.2 million today.

He fomented and trained guerrilla movements that challenged governments and armed forces in several countries of Latin America. Many felt Cuba offered an alternative, more authentic, brand of Communism that contrasted with the Soviet Union’s, which was seen as bureaucratic, based on repression, even of other peoples, and by then bereft of revolutionary zeal. 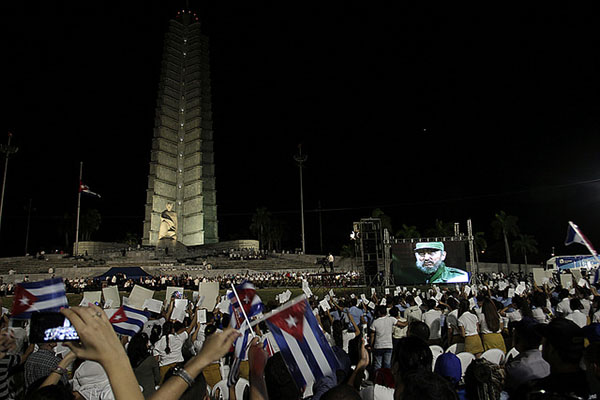 The defence of social equality, the top priority put on children, advances in education and health, and solidarity with oppressed peoples or nations hit by tragedies around the world are attractive components of Cuba’s style of Communism, despite its dictatorial nature.

It was not democracy – a value not highly respected decades ago, not even by the propagandists of freedom in the Western world, who also disseminated, or were linked to, dictatorships.

Cuban troops and doctors spread in large numbers throughout Africa and Latin America, in campaigns providing support and assistance, on some occasions playing a central role.

The action abroad that had the greatest impact was in Angola, where Cuba’s military aid was decisive in the country’s successful bid for independence, by cutting off the advance of South African troops that almost reached Luanda in the attempt to prevent the birth of the new nation, which occurred on Nov. 11, 1975.

For decades, Cuban troops were in Angola training the military and strengthening national defence, along with the Cuban doctors and teachers who helped care for and teach a new generation of Angolans.

The operation in Angola showed that Cuba was more than a mere pawn of the former Soviet Union. On May 27, 1977 there was an attempted coup d’etat by a faction of the governing Popular Movement for the Liberation of Angola (MPLA), led by Nito Alves.

Loyal to then President Agostinho Neto, the Cubans helped block the coup. They retook the main radio station in Luanda, which had been occupied by rebels, and returned it to government control. It was a Cuban voice fheard over the radio announcing the success of the operation.

The Soviets were on the side of the coup plotters, according to Angola’s leaders of the time. Diplomats from Moscow were expelled from the country, as were members of the Communist Party of Portugal.

A worse fate was suffered by the followers of Nito Alves accused of participating in the uprising: thousands of them were shot and killed. The number of victims has never been confirmed.

More recently, tens of thousands of Cuban doctors have spread a humane image of Cuba throughout Latin America, after they did so in many African countries. Thousands of them have worked in Venezuela since late president Hugo Chavez first took power in 1999. In Brazil, more than 11,000 Cuban doctors have been providing healthcare in poor and remote areas since 2013.

The Cuban revolution and its achievements are inextricably intertwined with the figure of Fidel Castro, whose leadership was so dominating that he probably would not have needed the rules of his political regime to constantly assert his power and authority over all activities in Cuba.

“Why hold elections?” many Cubans used to argue, in response to the frequent criticism of how long the Castro administration remained in power, without submitting itself to a real vote.

The impression is that his leadership was excessive, that it went far beyond the limits of the Caribbean island nation. His capacity for action was reflected in working meetings held in the wee hours of the morning, as well as in his meetings with visiting leaders.

His hours-long speeches were also delivered abroad, when he visited countries governed by friends, such as Chile in 1971 – governed at the time by socialist President Salvador Allende (1970-1973) – and Angola in 1977, under President Agostinho Neto.

“They don’t have a Fidel,” said Cubans in Angola, to criticise and explain errors committed by the government there, lamenting the lack of such an infallible leader as theirs, in a country whose development they were trying to support.

A product and subject of an era marked by the Cold War, Castro seemed destined to cause controversy, as a historic figure praised by some and condemned as a despot by others. But his political legacy will wane if Communism does not find a way to reconcile with democracy.