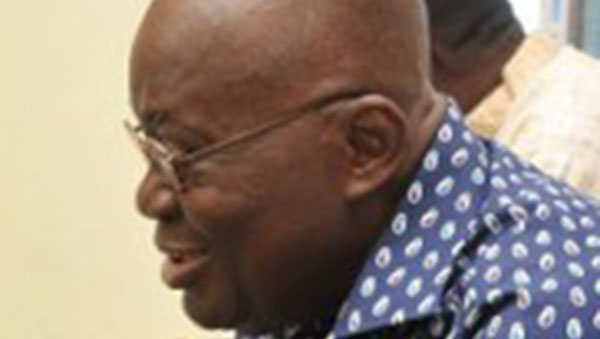 President Mahama, leader of the ruling National Democratic Party (NDC), called to concede defeat and congratulate third-time contender and flagbearer of the opposition New Patriotic Party (NPP) Nana Akufo-Addo minutes before the electoral commission came out to announce the results.

The 72-year-old opposition leader fulfilled his lifetime dream of stepping into his father’s shoes by polling 5.7 million votes (53.85 percent) to beat 59-year old President Mahama who managed 4.7 million votes (44.40 percent) in an election with 68.62 percent turnout.

“I voted for Nana because I believe his one-district-one-factory policy will create a lot of jobs so I could easily find one when I graduate.” — Second-year university student Modesta Bonsu

This was about 10 percentage points lower than the last presidential elections in 2012. The average voter turnout is 72 percent.

The NPP’s flagship campaign message of creating jobs and building a stronger economy seems to have resonated with voters in a country where almost half of the youth between the ages of 15 and 25 are unemployed, according to the latest World Bank report.

“I voted for Nana because I believe his one-district-one-factory policy will create a lot of jobs so I could easily find one when I graduate,” second-year university student Modesta Bonsu told IPS.

Osborn Adu, a 26-year-old IT worker, said utility bills and the cost of living have become so high that “sometimes I have to support my mom from money that I’m saving to pursue further education”.

Economic analysts say the NDC’s flagship message of infrastructure development failed to gain traction, with survey results showing that the primary issues of concern for voters were lack of jobs, high cost of living, and corruption.

The energy crisis, which was at its worst in the last two years, also saw electricity bills skyrocket, resulting in the collapse of businesses and attendant job losses. The institute of Statistical, Scientific and Economic Research found in a 2014 study that on average, the country loses production worth 2.1 million dollars per day as a result of the crisis and that it lost about 680 million dollars in 2014, which translates into about 2 percent of GDP.

The Industrial and Commercial Workers Union of Ghana (ICU) warned last year that more than 3,000 jobs would be lost to the erratic power supply by the end of 2015. It is of little surprise that in a survey conducted among SME operators by Policy Think Tank Imani-Ghana, many wanted to see a change in government. 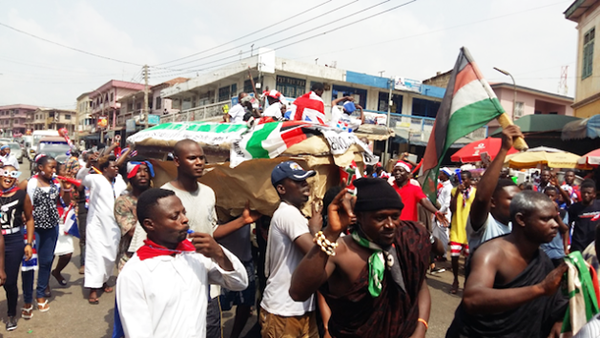 Residents in Kumasi, the capital of Ghana’s Ashanti region and stronghold of the opposition NPP, carry a casket, ready to bury John Mahama and his NDC whom they say is politically dead. Photo credit: Kwaku Botwe/IPS.

The NPP not only promised to cut taxes on electricity bills but also to financially restructure and provide a recovery plan for the utility companies to ensure sufficient reserve of energy to end blackouts.

The NPP flagbearer’s message of building a factory in each of the 216 districts in Ghana and ensuring that farming communities, especially in the northern part of the country, have irrigation facilities for year-round production of crops – the one-village-one-dam policy – seems to have been well received by voters.

Former president of the Peasant Farmers Association Mohammed Adam Nashiru believes the policy will help create thousands of jobs for farmers. “Our parents who were rice farmers during the Acheampong regime in the 1970s could buy for themselves brand new Mercedes Benz cars because the agriculture sector was booming due to good government policies,” he said.

“In my personal interaction with Nana Addo, he embraced the Agriculture Mechanisation Services Centres programme, where in some communities they are going to have equipment like tractors, combine harvesters, dryers and everything, so that small-scale producers who cannot afford to buy these machines can afford the services of these centres,” Nashiru said.

“So this is also another nice idea because 1,000 peasant farmers combined cannot even afford to buy a single tractor. But when these opportunities are available, the farmers can have the services of these tractors in their respective communities. So we hope and pray Nana Addo will give it the needed attention so that people, especially in the three northern regions, can get jobs and that will help curb the rural-urban migration,” he added.

One issue that gained a lot of public attention is corruption. Several cases which many see as loot-and-share have bedeviled the Mahama administration. The legal campaign by a former attorney general to help the state retrieve some 12 million dollars the government illegally paid to NDC financier and businessman Alfred Woyome has dragged out to the point that the frustrated former AG said the only way to get the money back into state coffers was to boot the government out.

Adu Owusu Sarkodie, an economics lecturer at the University of Ghana, believes Nana Akofu-Addo’s policy of fighting corruption and managing the public debt – which has more than tripled from 8.2 billion dollars in 2012, when John Mahama took over, to 26.4 billion dollars – can save the country money it can then funnel into economic development.

Sarkodie said that the country could easily have raided “the 1 billion cedi [236-million-dollar] Euro bond that we issued right here, because there are so many leakages in the tax system which can be sealed to ensure we are able to raise a lot of money for economic development.

“So Nana’s promise to fight corruption can provide the fuel for his one-district-one-factory and one-village-one-dam policies, because the 51 million Woyome money and other such payments can do a lot of things,” he added. 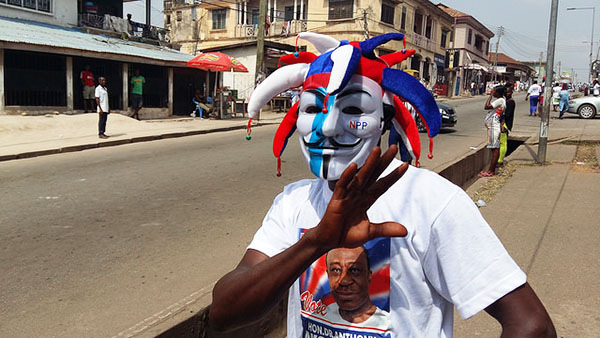 A jubilant supporter of the new president celebrates on December 10 in Kumasi after the results were announced. Photo credit: Kwaku Botwe/IPS.

The outcome of this election also brings to a close the lingering question of whether Ghanaian voters lean more towards political parties or leaders of parties.

Since 1992, Ghanaians have shuffled between the two main political parties, The National Democratic Congress (NDC) and the New Patriotic Party (NPP), every eight years. Things, however, took a different turn when then president Mills of the NDC died few months before the end of his first term. His then vice President John Mahama took over as the flagbearer and won on the ticket of the party.

This meant that while 2016 marked eight years of government for the NDC, President Mahama has served only four years. Political analysts were not sure whether Ghanaians would give the president another term or say goodbye to the NDC after eight years. The outcome of the election thus marks another historic event – Mahama becomes the first president to be denied re-election.