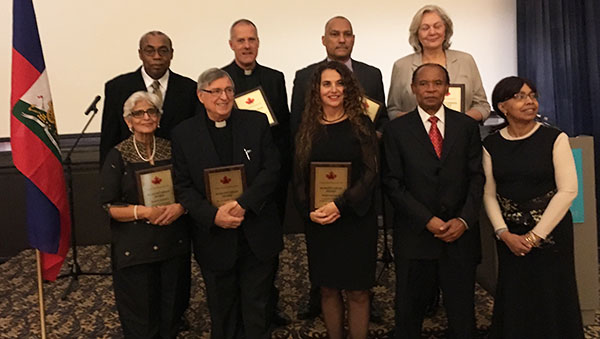 Supporters Of Haiti Celebrated For Their Work In The Country

TORONTO, Ontario December 12, 2016 — Six individuals have been presented with awards for their humanitarian work in Haiti.

Khenti, director of transformative global health at CAMH, was the principal investigator for the development of easy-to-follow, culturally adapted cognitive-behavioral therapy (CBT) interventions for working with individuals of Latin American origin, as well as those of African Caribbean origin (both English and French speaking).

The CBT intervention is now being tested with spiritual leaders in Haiti to see whether it can strengthen the system of informal care.

Chalifour received the award for her work in Haiti and for the many stories that she has published in L’Express newspaper.

Since the 2010 earthquake, she has visited Haiti with a group of Franco-Ontarian teachers and students from York University as part of an international development project.

In 2015, Chalifour, who is also a teacher at Collège Boréal, travelled to Haiti to interview several artists and activists to showcase a different image of the county and its potential.

Masucci, principal of St. Mark School with the Dufferin Peel Catholic School Board, and Basran, a retired teacher with the board, have worked in the bateys of the Dominican Republic and in Haiti for the past fourteen years.

Their work involves providing medical, nutritional and educational support to thousands of children and their families

Corcione and Moser are involved in a program that started at St. Peter’s parish in Woodbridge over 12 years ago.

“We usually visit three bateys in July every year (las Pajas, La Cachena, Alejandro Bass) but we serve many, many others. We have an education program where students are given scholarships to attend university. We support three full time teachers in Las Pajas who teach children on a daily basis who wouldn’t normally go to school,” notes Father Corcione in the program.

He said their work with Haitians living in the Dominican Republic is ever growing and expanding.

Antoine Derose, president of the organization, said all six received awards for their work, commitment and contribution to the improvement of the condition of Haitians.

“It would be a constant reminder to me that the Haitian community is not alone in its struggle to achieve an improvement in the standard of living, and your presence today means that despite their struggle, Haiti and the Haitian diaspora have many, many, good friends,” he said.

The gala is the primary fundraising event held by Pierspective and all the proceeds go towards completing the St. Paul de Corail Cesselesse school in Corail, Haiti.

Over 300 boys and girls presently attend the school and completion of the second floor will add another five classrooms which would enable more children to benefit from early childhood education.

Derose reminded the patrons that November 18 marked the anniversary of The Battle of Vertières in 1803, which resulted in the ultimate victory of the former enslaved Africans over the Napoleon Bonaparte-led French army.

Dr. Eric Pierre, immediate past president, said he admired the commitment of the award recipients towards Haiti.

Pierspective Entraide Humanitaire was founded in 2002 with the objective to alleviate the burden of challenges brought to the large majority of Haitians by numerous historical and socio-economic factors, notes Pierre, the founding president, in his message in the program.

The scheduled keynote speaker, Frantz Liautaud, Haitian Ambassador to Canada, could not attend but sent his message, which was read by Derose.

The emcees for the evening were Nikki Clarke (English) and Stephanie Louie (French).

Meanwhile, a cheque was presented to Dr. Pierre this week (December 5) of funds collected at an event held at the Jamaican Canadian Centre on November 10 to raise money and awareness for the plight of Haitians adversely affected by Hurricane Matthew.

All funds that were raised will go towards medicine, food, shelter and clothing for those impacted by the hurricane on the island.

The collaborative effort was held under the leadership of Dr. Pierre, the honorary consul general for Haiti, the Jamaican Canadian Association, and a number of Caribbean organizations, alongside the Caribbean Consular Corps.