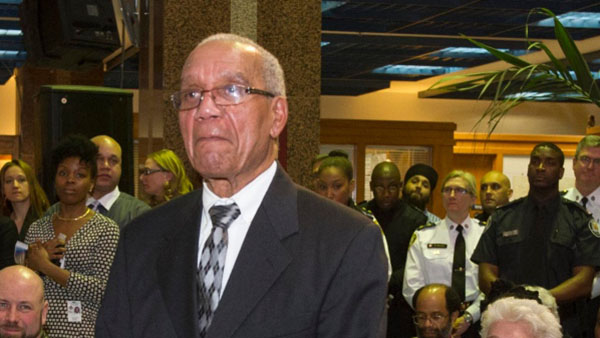 TORONTO, Ontario December 15, 2016 — With his passing at the age of 87, Larry McLarty, Toronto’s first African Canadian police officer, is being remembered for the course he charted for other black police officers.

McLarty, who hung up his uniform for the last time as a staff sergeant of the Metropolitan Toronto Police in 1992, passed away peacefully in Oshawa on Dec. 1.

In a story about his death on the Toronto Police Service (TPS) website, Chief Mark Saunders says: “Being the first brings a lot of challenges and he would certainly have been subjected to many difficulties. You have to have thick skin and he definitely had that. When you look at how we have progressed as a police service, we have to remember the starting point was Larry. If there was no Larry, who knows where we would be today?”

Kenton Chance, President of the Association of Black Law Enforcers (A.B.L.E.), says McLarty was the original trailblazer for black police officers in Toronto and “possibly the most significant police officer who was hired in law enforcement.”

Born in Jamaica in 1929, McLarty was a police officer there for eight years before migrating to Canada in 1957 and joining the Toronto service on January 25, 1960, thus becoming its first black officer.

Keith Forde, the first black deputy chief of the TPS, says if there was anyone that had an impact on him as he was rising through the ranks it was McLarty because he could imagine what he went through as the first.

“To me, he was the right person at the right time. And what I mean by that is it takes a special person that could see the greater good at the end to put up with what you have to put up with to achieve the results that you want.”

He said being the first and being a trailblazer comes with its accolades but it also comes with a lot of downsides.

“One, you can’t fail because if you fail, you fail your race. Two, people expect you to be super at everything you do; you’re not given the chance to fail like anyone else in any area.”

Forde said McLarty reminded him so much of Roy Williams, the first black Toronto Police Services Board member “because I think they could not have picked a more perfect person for the first one on the board.”

“These people come with a temperament about them that they don’t get flustered and it seems like they know the history is unfolding. So, I had nothing but great admiration and respect for Larry, for what he has done, how he has opened the door.”

The former deputy chief maintains that if McLarty were a failure, he (Forde) would not have gotten to where he did.

“I found that his style, how he carried himself and his temperament was so suited to be that person that we wanted to be the first black. He set the bar how to carry yourself, how to behave and you’ll advance.”

Forde said what McLarty had done was not only for the visible minority community but also for the larger community, whether it is Toronto, Ontario or Canada “so we all owe him a debt of gratitude for what he has done for us.” 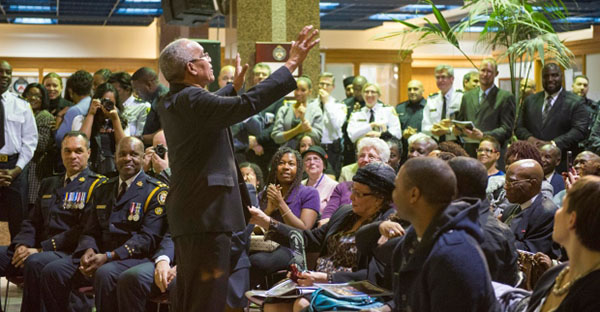 “The Toronto Police and the City of Toronto lost a quiet hero who never sought to be a trailblazer or a role model but became just that. I was personally inspired by his strength, perseverance and grace.  That is why [I] sought to honor Larry’s career as a public servant, police officer and loving father by creating the Larry McLarty Scholarship in his name during my time as a board member of the BBPA National Scholarship Fund,” says Peter Sloly, former Deputy Chief of Police, and Executive Director, Risk Advisory/Cyber and National Lead for Security and Justice Sector at Deloitte Canada.

McLarty rose to the rank of detective sergeant and was one of the original Emergency Task Force team members and also a member of the Urban Black Squad.

He worked for the Complaints Bureau and on August 1, 1992 retired after 32 years of service.

His first job in Toronto was on the railway, shining shoes but this job lasted only one day. He then went on to work for Sears as a catalogue book packer and subsequently as a night cleaner at a bank.

With his earnings he was able to send for his wife who secured a job four days after she arrived. She did not like the idea of him having two jobs, and at the suggestion of a friend, he applied to the Metropolitan Toronto Police as there were no men of colour there.

He was turned down because of the height requirement but two months later this changed when he bought a suit. He needed a well-tailored suit to wear on special occasions and when the tailor measured his height, McLarty was the actual height required for admission to the police service.

He went back to police headquarters to re-apply and was hired in 1960. 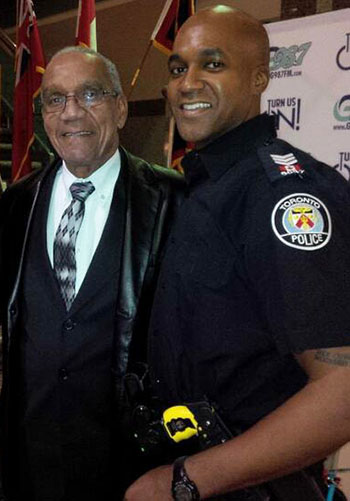 “During his lifetime he was able to see the formation of a black law enforcement organization in 1992 when he retired,” said Chance.

Devon Clunis was the first black person to be appointed a police chief in Canada when he became head of the Winnipeg Police Service in 2012, and served until retirement in 2016.

Chief Saunders became the first black person to be chief of the Toronto service in April 2015.

“Larry’s legacy lives on in the form of many black police officers serving in Toronto and across Canada,” said Chance.

McLarty leaves behind Nona, his wife for more than 60 years; son, Michael McLarty of Cincinnati; and daughter, Althea McLarty- Penza of New York.

McLarty was predeceased by his brothers and sisters, and is fondly remembered by his many nieces, nephews and their families.

A funeral service was held in Whitby, Ontario on Dec. 7. In memory of Lawrence, donations to the Larry McLarty Scholarship Fund were accepted.

The Larry McLarty Scholarship of $2,000 is sponsored by the Toronto Police Service’s Black Internal Support Network.

The scholarship is awarded to a student enrolled at an accredited university or college in Canada as a full-time student in diploma or degree program leading to a career in law enforcement.