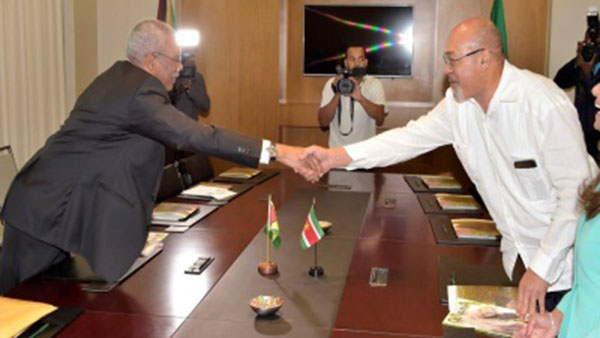 Suriname President, Desi Bouterse, was met by his host, President David Granger, when he arrived at the Ogle International Airport, inspecting a guard of honour before being whisked to the Marriott Hotel for the bilateral talks that covered a wide range of topics. 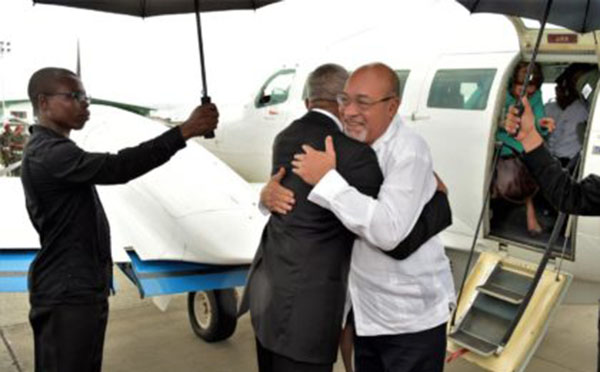 Speaking to reporters afterwards, President Granger said that the two countries have taken a number of decisions that they hope will, not only “expedite matters previously discussed, but, more importantly, the plans for the future”.

Granger, who made a similar one-day visit to Suriname in July, said that Guyana remains concerned with economic integration, and urged the removal of any obstacles for deepening that integration.

Bouterse announced that agreement had been reached, regarding the appointment of a high-level representative, who will conduct shuttle diplomacy to resolve several areas of concern between the two countries.

“We have agreed to a mechanism in which the different issues that will be brought up or have been brought up, per sector, can be discussed and that these will be implemented and monitored within a certain time-frame and then reported back,” he said.

President Granger said the two countries would agree to the terms of reference of the special envoy, who would have ambassadorial rank and have official status in both capitals.

“Any time there is a bottleneck, we are confident that it would be cleared up much more quickly,” he added.

Bouterse said that cooperation in fighting crime has proven to be beneficial to both countries and that the scourge of piracy, which had plagued the Berbice area, has now been quelled, due to that cooperation.

President Bouterse said that he discussed a number of “small issues” that were affecting citizens of both countries, insisting “we are going back to look for solutions to those small problems”.

The two leaders also discussed the possibility of building a bridge over the Corentyne River, with Bouterse telling reporters “both of our countries are interested”. 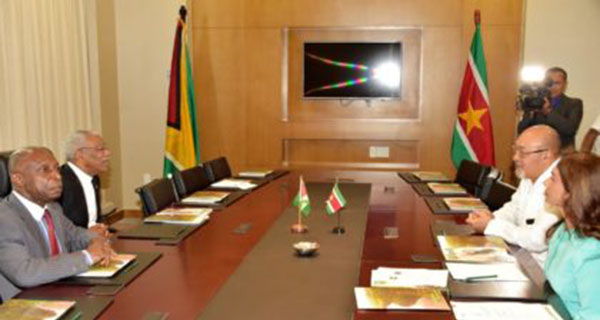 He said he had also brought his Guyanese counterpart up to date on the history and possibility of the construction of a bridge over the Corentyne, saying if a bridge is to be constructed, both countries would have to make several decisions and an agreement would have to be made on the location.

He recalled that in 2013, Suriname signed a memorandum of understanding (MOU) with a “large Chinese group” for the construction of the bridge and had received a no objection from the former Guyana government.

He said Beijing was willing to pay for the bridge, but a feasibility and environmental impact study is first required and that Brazil and the European Union (EU) were also interested, noting that “the EU because the integration of South America is attractive to them.”

The two leaders also discussed the oil and gas sectors, which Granger told reporters had also been discussed in July.

He explained that since Suriname has an oil and gas sector for some time, “we are confident that we will be able to rely on Suriname in the future” for their expertise and advice.

Granger also disclosed that plans are afoot to revive the Guyana-Suriname Cooperation Council.