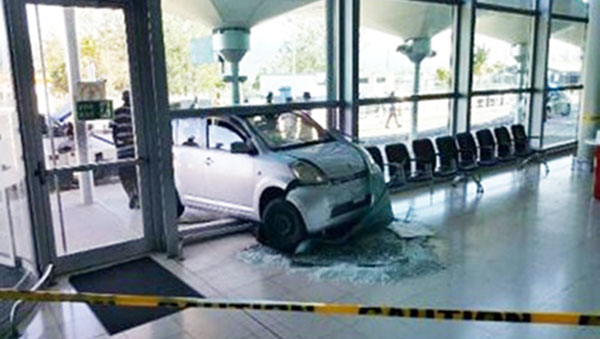 KINGSTON, Jamaica, December 19, 2016 (CMC) – Two people, including an unidentified person sitting in the departure lounge of the Norman Manley International Airport (NMIA), were injured after a vehicle ploughed into the glass facade of the departure lounge, today.

Head of the Police Traffic Division, Senior Superintendent Calvin Allen, told the Gleaner newspaper that the incident occurred as two brothers, one of whom was the driver, dropped their mother off at the airport.

The driver, who was also not identified, and does not hold a driver’s license, was injured in the accident. He remains in police custody and may be charged by police, who are still investigating.

Allen said he was reminding drivers to ensure that their engines are switched off before leaving their motor vehicles.