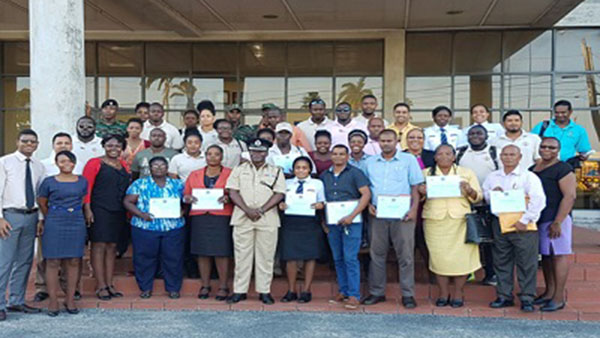 Guyana Pledges To Deal With Trafficking In Persons

GEORGETOWN, Guyana, December 19, 2016 (CMC) – The Guyana government says it remains committed to collaborating with all stakeholders, including those overseas, in combating human trafficking here.

In a statement following a two-day training course, the Ministerial Task Force on Trafficking in Persons said it wanted to thank organisations, such as the International Police (INTERPOL), the United States and the Task Force member agencies, “for their unwavering support in the overall fight against trafficking in persons in Guyana”.

It said that the objectives of the training course were to equip local stakeholders with information regarding the nature of the crime of trafficking in persons; how to identify, assist and refer victims; and best practices for investigating the crime and create a network for exchange of information among frontline officers and other stakeholders in different regions of Guyana, who may come into contact with potential cases of trafficking in person.

The Ministerial Task Force said that, in 2017, it intends to target other relevant entities, such as the judiciary, media and the general public in its coordination of similar training courses and implementation of sensitization initiatives as it seeks to increase the effectiveness of the government’s efforts to tackle the scourge.

“The Task Force remains committed to collaborating with all stakeholders, local and international, in combating trafficking in persons in Guyana,” the statement added.

In its 2016 Trafficking in Persons Report, the US Department of State noted that “Guyana is a source and destination country for men, women, and children subjected to sex trafficking and forced labour.

“Women and children from Guyana, Brazil, the Dominican Republic, Suriname, and Venezuela are subjected to sex trafficking in mining communities in the interior and urban areas. Victims are subjected to forced labour in the mining, agriculture, and forestry sectors, as well as in domestic service and shops.”

Washington said that the Guyana government “does not fully meet the minimum standards for the elimination of trafficking; however, it is making significant efforts to do so”.

It said one person was convicted and given a three-year prison sentence and that she was required to pay the victim restitution, “the first time restitution has been ordered for a trafficking offender in Guyana”.