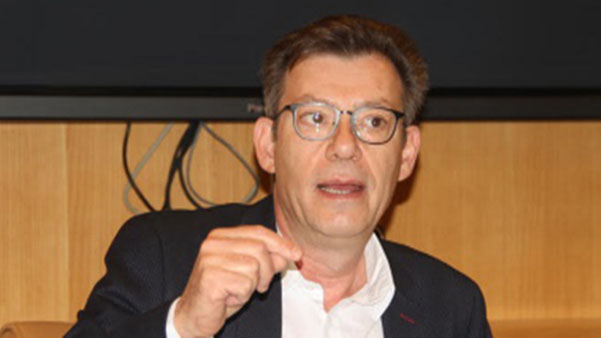 Emmanuel Nahshon, a spokesperson at the Israeli Ministry of Foreign Affairs, spoke to a group of seven CARICOM journalists in Jerusalem, last week. Photo credit: CMC.

JERUSALEM December 20, 2016 (CMC) – For many Caribbean Community (CARICOM) nationals, the word Israel is akin to thinking of “God’s chosen people” who have been prosecuted throughout the ages.

And while the Bible states in Psalm 135:4 “For the LORD has chosen Jacob for Himself, Israel for His own possession”, present day Israel, the only democracy in the Middle East, makes no such claim.

Only two percent of Israel’s population are Christians, with Judaism (74.8%) being the dominant faith, followed by Islam (17.6%).

Many CARICOM countries still view Israel as the aggressor in the decades-old conflict with Palestine, dating back to 1948.

But Emmanuel Nahshon, a spokesperson at the Israeli Ministry of Foreign Affairs is hoping that the 15-member CARICOM grouping would consider other information when arriving at their positions on the Arab-Israeli conflict.

Speaking to a group of seven CARICOM journalists in Jerusalem last week, Nahshon noted that CARICOM has a tendency to vote en bloc and some of the countries have made clear their position on the Arab Israeli conflict.

“CARICOM together represents a political and diplomatic weight in world affairs. We see it at the United Nations, we see it in other organisations,” he told the journalists, who were brought to Israel on a tour, sponsored and organised by Fuente Latina, a registered U.S. non-profit organisation that claims it is not affiliated to any government.

Fuente Latina says its objective is to educate Latino audiences about Israel and the Middle East by providing factual information and analysis for the Spanish-language media.

The tour, which ran from December 10 to 16, was the first that Fuente Latina had organised for journalists from CARICOM to visit Israel, which, along with Taiwan, are said to be the two countries to organised the most media tours to their jurisdictions.

Nahshon, who is also head of the press bureau at Israel’s Ministry of Foreign Affairs, noted that Israel was one of the first countries to help Haiti, a CARICOM member, following the earthquake of 2010, building a field hospital and sending police troops to assist.

In mid-November, Israel became the first country to earn the World Health Organization’s (WHO) highest ranking for its field hospital unit of the type it set up in Haiti.

But by the end of that same month, the United Nations would vote for adoption of six resolutions on Palestinian and Middle East issues, ranging from Jerusalem to the United Nations special information program on the question of Palestine.

The conflict between Israel and Palestine, known commonly as the Arab-Israeli conflict, began in the 1940s, after the end of World War II and the end of the Holocaust, in which six million Jewish people were murdered.

Jews, who have clamoured for their own country, have long considered Palestine, their traditional home. This partitioning occurred when Britain withdrew from its mandate of Palestine and the United Nations proposed partitioning the area into Arab and Jewish states, an arrangement rejected by the Arabs.

But a series of wars between both sides since then, has seen Israel controlling more land than it did in 1948 amidst accusation of heavy-handedness against the Palestinians, including blocking crucial supplies to the Gaza strip.

Israel, for its part, has said that Palestine refuses to accept its right to exist and that many of its actions are in its own security interest.

St. Vincent and the Grenadines has been among CARICOM countries to express, at the United Nations, strong objections to the action of Israel against Palestinians.

Speaking at the United Nations General Assembly in September, where Palestine is a permanent observer, St. Vincent and the Grenadines Prime Minister, Dr. Ralph Gonsalves, lambasted the “impotence of learned helplessness and the tyranny of fossilised inaction”, which he said has allowed for “the continued and manifestly unjust exclusion of many nations from the promise of an integrated world”.

“The people of the State of Palestine are victims of this impotence, despite overwhelming recognition of Palestine and the obvious need for an independent, contiguous, internationally-supported state, living in peace alongside it’s Israeli neighbours,” said Gonsalves,

“With each passing day, and with each land-grab and illegal settlement by Israel, a two-state solution becomes ever more remote, and instability in the Middle East becomes all but guaranteed,” he added.

But Nahshon said that Jerusalem is not trying to create divisions with CARICOM — an economic and political union — but wants “to talk to the bloc, to talk to the countries, to make them change their minds”.

“And we believe that by seeing reality, it will contribute to a change of mind,” he said in response to a question regarding what Israel wanted from CARICOM.

“There is a lot of ideology behind this, which is, frankly speaking, old-fashioned and yesterday’s news,” he said, mentioning specifically Cuba and Venezuela.

In 2009, Venezuela expelled the Israeli ambassador in Caracas and seven embassy staff members to protest Israel’s actions in Gaza.

Caracas said then, it had “decided to break off diplomatic relations with the state of Israel given the inhumane persecution of the Palestinian people”.

Nicaragua, Venezuela and Bolivia joined Venezuela as the four Latin American countries with which Israel does not have relations. In 1973, Havana broke off diplomatic relations with Israel as then president, Fidel Castro, was running for president of the Non Aligned Movement.

But the Israeli spokesman said, last week, that the actions of Havana and Venezuela are “yesterday’s news.

He said the conflict is “not about who is right or wrong”, but about “adopting to the new challenges, to the new issues which concern us all and in those new issues, there is no place for black and white”.

Nahshon said that in the era of the cold war, a country was either for one side or the other.

“We live in a world in which — you will pardon me for the reference — we live in 50 shades of grey. Nothing is black and nothing is white in politics, in diplomacy, in economy; in globalisation is a phenomenon, you know, that we need to cope with and deal with and I think that having those clear cut ideas without knowing exactly what is it you are talking about is not necessarily a good idea.”

He said that Israel would love to receive high-raking visitors from the Caribbean, including prime ministers, important ministers, and parliamentarians, adding that the Middle Eastern country has been extending such invitations for a number of years.

“I think that it is extremely important,” he said, noting that Jerusalem has an ambassador to the Caribbean, based in New York, who moves between the islands and “tries to have as much contact as possible”.

He, however, noted that no Caribbean country has an embassy in Israel, adding that the fact that CARICOM nations do not have representation in Israel “is an obstacle because it means that you will receive your contact second hand or the information second hand”.

Nahshon said that if a country has an ambassador in Rome, who is also accredited to Jerusalem, Israel would not be the top priority.

“And that’s quite normal and we are missing a lot. And that’s why your visit is important because it is one more bridge that we are trying to bridge,” he said, adding that he would like to see a visit of Israeli journalists to the Caribbean, saying this is “also extremely useful”.

“They associate the Caribbean with wonderful cruises and vacations. They have no idea that there is a whole wide world out there, with economics and politics and culture and society with challenges, etc.”

Nahshon is convinced that CARICOM leaders would be inclined to change their position on the Arab-Israeli conflict if they visit Israel.

“I think that the more that decision-makers from the Caribbean will be exposed, directly, to the reality here, the more they will have a clear picture of the situation. That’s what I am saying. I am saying come and visit… come here, see the situation, talk to people and then it will give you a better understanding of what is happening here.

“Living far away and saying those guys are good and those guys are bad, it doesn’t make sense. You need to see for yourself what is the reality, how complex is this reality,” Nahshon said, appealing also to the religious beliefs of CARICOM nationals, saying that Israel is one of the few safe places for Christians in the Middle East.

“I think that if you are a Christian person and if your Christian beliefs are important to you, you also need to look at the wider picture of the situation of Christians in the Middle East, who are being persecuted, which are an endangered and persecuted minority, whereas you see that in Israel the situation is totally different. So these are demonstrations of the fact that when you are far away, sometimes you have a bit of stereotypes, they don’t always correspond to reality.”

He told reporters that he believes in reality, adding that “reality is always nuanced.

“This is a conflict between two rights. We have the right to have our own country, here. And the Palestinians also have the same right. And this is why the only way to reach a peaceful agreement is by compromise.”

The one-week visit to Israel included tours to the Old City of Jerusalem, Nazareth, the Sea of Galilee and other places of historic importance. It also included a tour to a number of technological start-ups in Tel Aviv, budded the “Start Up City” and a stop at a site about 10 kilometres from the Israeli-Palestinian border.

Guyanese journalist, Gordon Moseley, who was among the seven CARICOM journalists on the visit here, has described Israel as a beautiful country, saying Tel Aviv is “a shocker”.

“When you hear about Tel Aviv, it’s always some reporter reporting from a war zone. But now you have been able to experience Tel Aviv — really beautiful; Jerusalem, of course, with the rich history behind it, extremely nice place to be,” Mosely told the Caribbean Media Corporation (CMC) adding that he still wanted “to hear the other side” as it relates to the political situation in the Middle East.

“I’ve heard this side. I would have to hear the other side to really have a final decision on how I see things here. But they have made their case,” he said, noting however, that he was pleased to see that Arabs, Jews and Christians were living together in Israel.

“Everyone appears to be living as one, at least in Jerusalem and Old Jerusalem in the old city where we were. So that is a good thing,” he told CMC.