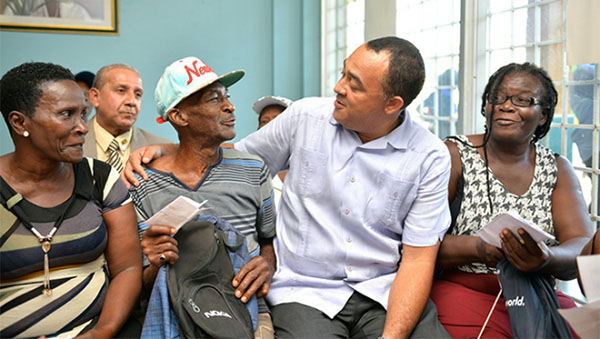 Health Minister, Dr. the Hon. Christopher Tufton (2nd right), shares a light moment with Clarendon resident, Henry Osborne (2nd left), following Monday’s (December 19) launch of the Ministry’s Public Sector Pharmacy Partner Programme at Health First Pharmacy in May Pen. The initiative is being implemented as a pilot in the parish over the next three months. Others (from left) are residents – Lillian Davis and Janett Davis. In the background is May Pen Mayor, Councillor Winston Maragh. Photo credit: JIS/Yhomo Hutchinson.

KINGSTON, Jamaica, December. 22, 2016 (CMC) – The government of Jamaica has promised to establish a memorial site for victims of the 1860 cholera epidemic that led to the deaths of approximately 40,000 persons.

According to Health Minister, Dr. Christopher Tufton, the monument would serve as a reminder to Jamaicans.

“I am making a commitment here that we are going to take it up and have discussions, find an appropriate place to memorialise that particular issue, in the interest of history and public safety, going forward,” he said.

Tufton was speaking at a recent town hall meeting, where concerns surrounding the development of the cholera cemetery, located in the Corporate Area, were discussed.

The planned development has already been approved by the Kingston and St Andrew Municipal Corporation (KSAC) after the Corporation received formal advice from the National Environment and Planning Agency (NEPA) and the Ministry of Health.

Dr. Tufton pointed out that the land in question is privately owned, and the government’s influence and control over the property is only to ensure that it is not used in a way that may be injurious to the general population.

“That’s what the approval process does. It goes through a process of assessment and analysis, and once all of those things are clear, there is no basis on which to dictate to the private owner what to do with the land that they own,” Dr. Tufton noted.

Cholera is an infectious disease that causes severe diarrhea, which can lead to dehydration and even death if untreated. It is caused by eating food or drinking water contaminated with a bacterium called Vibrio cholerae.

The Health Minister’s ministry is also being hailed by residents of Clarendon for its implementation of the Public Sector Pharmacy Partner Program in the parish.

The initiative, which is being piloted over the next three months, aims to reduce the waiting time for medication at public hospitals and clinics.

It is being spearheaded by the National Health Fund (NHF) and involves collaboration with select private-sector pharmacies to fill prescriptions for public patients.

The pilot includes five pharmacies in Clarendon and nine in Kingston.

The service will attract a nominal $200 user fee to cover the pharmacies’ operational overheads. It is intended to complement the NHF-run DrugServ pharmacies, which offer cost-free services at the public hospitals.

Mayor of May Pen, Councillor Winston Maragh, welcomed the initiative. He said residents using the Lionel Town Hospital have complained about delays in the dispensing of medication.

“Persons have indicated that they are unable to get through, either because the hospital’s pharmacy is too full of customers or doesn’t have all items listed on their prescriptions. As such, this (new initiative) is a welcome move. I know it will benefit the citizens of, not only May Pen and the entire parish… (but) eventually, the entire country,” Councillor Maragh said.

He was speaking at the launch of the initiative by the Health Minister, Dr. Christopher Tufton, at the Health First Pharmacy on December 19.

Osborne Store resident, Leopold Green, who was the first client to have his prescription filled under the program, expressed pleasure at the move.

“I am so happy, because I probably wouldn’t have gotten through yet, if I had gone over by the pharmacy at May Pen Hospital because of the amount of people who use it,” he said.

Green said he was “overjoyed” that Health First was able to provide all the items on his prescription and believes that the initiative is a good one that can work.

Another resident, Janett Davis, had high praises for Dr. Tufton, whom she said, “is doing good for us” by establishing the program.

“He is going into the hospitals and visiting the people (and) seeing their needs, knowing that at times some of us have difficulty getting the medication we need,” she said.

Davis said the $200 user fee that will be charged to access service at the private pharmacies is “reasonable”.

“Affordability is the key for progress… and we thank Dr. Tufton very much for considering us and considering our needs,” Davis added.

Senior citizen, Henry Osbourne, who also embraced the program, said that “it can work” and is hopeful that “it will continue for a very long time”.

Lillian Davis, who voiced frustration over the delays at the public pharmacy, also expressed optimism that the program “will work out for the best for us”.

The other participating entities in Clarendon are GSD Pharmacy, Jenny’s Pharmacy, Miller’s Pharmacy and Newland Pharmacy.

In his remarks during the ceremony, Dr. Tufton acknowledged the great demand on the DrugServ pharmacies to meet clients’ needs, noting that “invariably, there is a long wait (of, on) average… three hours”.

“Waiting (for) hours after a doctor prescribes medication to help to cure you, may contribute to your ailment. Psychologically, it’s a difficult thing to do, especially when you are not feeling well and you feel you need the attention, and the doctor confirms (this),” he argued.

The Minister said a “critical plank” of improving customer service in public healthcare delivery is to give quicker attention to filling prescriptions, so that the patient gets better care.

“We have concluded that there is no better way to do that than to engage our stakeholder partners in the private sector,” he added.

Dr. Tufton contended that “if you have to pay a $200 administrative cost to access service at the private pharmacies, it’s worth it, given the limited time that you want to spend… and then move on”.

Meanwhile, Dr. Tufton said the DrugServ pharmacies, though challenged, have a “good system” in place, which continues to administer services to thousands of persons island-wide.

The Ministry is expected to make a decision on the rollout of the program at the start of the 2017/18 fiscal year in April, once the pilot is completed.

Dr. Tufton believes that over the long term, “this is going to eliminate extended waiting in our pharmacies at the DrugServ windows”.

“Therefore, it will make the DrugServ window even more efficient because they will have fewer people to deal with… (allowing them) more manageable crowds,” he added.

Persons accessing services under the program are required to have a government of Jamaica (GOJ) or NHF health card.

NHF Chairman, Christopher Zacca, said that this will facilitate monitoring of the system’s usage, including the particular groups taking advantage of the service.

In his remarks, NHF Chief Executive Officer, Everton Anderson, described the program as a “bold initiative”.

He pointed out that more than 90 percent of the persons participating in a survey conducted by the agency indicated a willingness to pay a fee of between $200 and $300 to access the services.

“Partnerships are important and this has really been undertaken in a spirit of cooperation,” Anderson added.