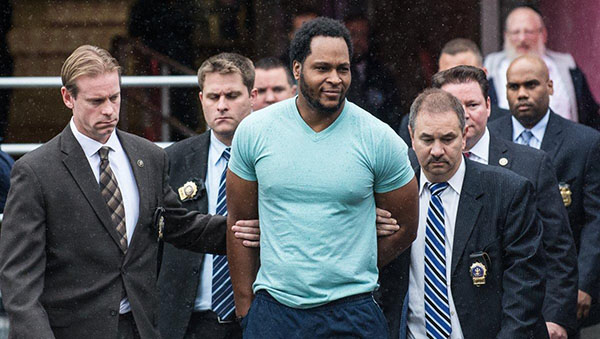 St. Lucians Indicted In Connection With Murder Of Brooklyn Landlord

NEW YORK, New York December 22, 2016 (CMC) – Three St. Lucians were indicted, yesterday, in connection with the 2014 abduction and murder of Menachem Stark, a landlord from Brooklyn.

Acting Brooklyn District Attorney, Eric Gonzalez, said a 38-year-old St. Lucian man, who lives in Brooklyn, has been indicted for murder and kidnapping, while he and two of his compatriot co-defendants have also been indicted for conspiracy.

The defendants have been identified as Erskin Felix, 38, and his brother, Kendall Felix, 28, both of Crown Heights, Brooklyn, and cousin, Irvine Henry, 35, also of Crown Heights.

A jury has already convicted Kendall Felix, of first-degree kidnapping and second-degree murder, in the case. He is awaiting sentencing and faces up to 25 years to life in prison.

According to the investigation, cousins Erskin and Kendel Felix accosted Stark on the street as he left his office on Rutledge Street in Williamsburg on the night of January 2, 2014.

After he fought unsuccessfully to escape, Gonzalez said Stark was forced into a waiting vehicle and driven away from the location. Kendall and Henry allegedly joined their relatives later.

“At some point, apparently while being restrained, Stark died of asphyxia,” said Gonzales.

According to the investigation, Erskin Felix, who was in the construction trade with Kendel Felix and Irvine Henry, had done work for Stark.

“Upon discovering that Stark was dead, the four relatives allegedly returned to Rutledge Street, intending to dispose of Stark’s body,” he added. “Upon arrival, Erskin and Irvine Henry got out of the vehicle, only to find the crime scene already flooded with police.

“As alleged, Erskin then directed Kendel and Kendall to go elsewhere to dispose of the body,” continued Gonzalez, stating that they drove to Nassau County, in nearby Long Island, “threw the body in a dumpster and set it on fire.”

“This indictment is the latest step in our journey toward justice for Menachem Stark, his seven children and the rest of the family his killers took him from,” Gonzalez said. “The tireless work of NYPD [New York Police Department] investigators and prosecutors from my Office will ensure that all involved in this grievous crime are held to answer for their despicable acts.”