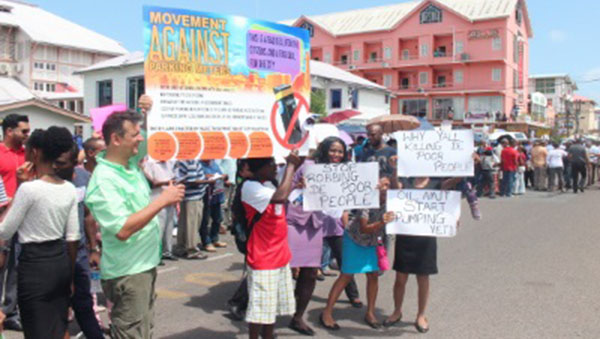 GEORGETOWN, Guyana, February 4, 2017 (CMC) – Hundreds of people, including students and business executives, took to the streets here, yesterday, protesting the introduction of parking meters in the capital.

But while the Movement Against Parking Meters was able to attract a significant number of protestors, a small band of people also marched here in support of the initiative.

The David Granger government, on Thursday, said the by-laws to govern the parking meter system have been sent to the Attorney General Chambers for advice, before coming before the Cabinet.

“This is not a political movement, it is a citizens’ movement and we first want to make that very clear. This is about all of us coming together to correct a wrong, because this will affect everyone and will affect businesses, in one way or the other,” said businessman, Komal Ramnauth, one of the persons behind the group that staged the demonstration.

Motorists are also complaining that the parking fee is extremely high at GUY$200 (One Guyana dollar =US$0.004 cents) per hour, plus value added tax (VAT).

Georgetown mayor, Patricia Chase-Green, who stood on the side with the protesters in support of the parking meters, said she does not believe the fee is too high.

“No one has come in to talk to us and to have discussions and raise concerns. We are just seeing the protest here and on social media, but no one is coming to talk to us,” she added.

Last month, the Guyana Teachers’ Union (GTU) said it had reached agreement with the parking meter company, Smart City Solutions, allowing for its members not to pay fees while they are teaching.

The GTU had earlier organised candlelight vigils outside the residences of Prime Minister, Moses Nagamootoo, and President Granger to air their grievances on a number of issues, including parking meters outside schools and poor salaries.