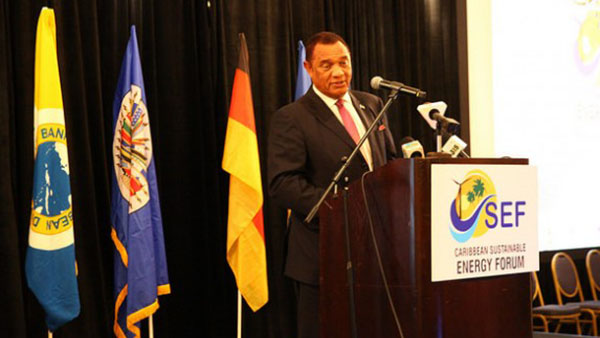 Prime Minister of The Bahamas, Perry Christie, says special consideration needs to be given by international financial institutions to the unique circumstances of his country. Photo credit: Desmond Brown/IPS.

The storm dumped 15 inches of rain on the mountainous island, caused floods and mudslides and set the country back 20 years, according Prime Minister Roosevelt Skerrit.

The island was inadequately prepared for a storm such as Erika. Many roads and bridges were simply not robust enough to withstand such high volumes of water.

In a national address shortly following the storm, Skerrit said that hundreds of homes, bridges and roads had been destroyed and millions of dollars in financial aid were needed to help the country bounce back.

“In order to get back to where we were before Tropical Storm Erika struck, we have to source at least 88.2 million dollars for the productive sector, 334.55 million for infrastructure and 60.09 million for the social sectors,” Skerrit said.

Dominica’s neighbours in the Caribbean were the first to deliver aid in the form of medical assistance, telecommunications engineers, and financial aid, and were followed by essential supplies and manpower from Venezuela and doctors and nurses from Cuba.

“It is critical that there must be relatively quick access to this Fund by those it is intended to assist.”  — Dominica’s Prime Minister Roosevelt Skerrit

Now, 18 months later, Skerrit said the island is still in the initial recovery stages of the devastation wrought by the storm, and he is pleading for swift action from international funding agencies for his country and its Caribbean neighbours which have been impacted by severe storms in recent years.

“Of particular importance to us is the Green Climate Fund (GCF) which has been established to assist in adapting to and mitigating the effects of climate change,” Skerrit told IPS.

“It is critical that there must be relatively quick access to this Fund by those it is intended to assist. As laudable as it is, it will be of minimal impact if disbursement is as sluggish as has been the experience with other institutions and agencies.

“The increasing intensity and frequency of these climatic events force us to face the reality of climate change. Hardly any of us in the region has been untouched in some form by the effects of the phenomenon and this emphasizes the need for the implementation of the measures contained in the Paris Agreement,” Skerrit added.

The GCF was established with a mission to advance the goal of keeping earth’s temperature increase below 2 degrees C.

The Fund is a unique global initiative to respond to climate change by investing in low emissions and climate-resilient development.

The GCF was established by 194 governments to limit or reduce greenhouse gas emissions in developing countries, and to help adapt vulnerable societies to the unavoidable impacts of climate change. Given the urgency and seriousness of the challenge, the Fund is mandated to make an ambitious contribution to the united global response to climate change.

The Belize-based Caribbean Community Climate Change Centre (CCCCC) was accredited as a regional implementing entity by the Board of the GCF in 2015.

CCCCC Executive Director, Dr. Kenrick Leslie, said it speaks to the high caliber of work being done in the region and the strength of the centre’s internal systems.

“We will now move forward with a set of ambitious and bankable projects that we have been developing under a directive from CARICOM Heads,” he said.

As the first regionally accredited organization, the CCCCC is now the interface and conduit for GCF funding to the Small Island Developing States (SIDS) of the Caribbean. 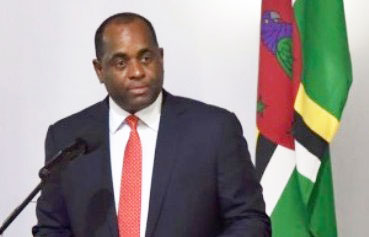 Skerrit, who wrapped up his tenure as chairman of the Caribbean Community (CARICOM) in February, said he visited Haiti and The Bahamas during his chairmanship of the 15-member regional grouping to see first-hand the devastation caused by Hurricane Matthew.

Last year, Hurricane Matthew rapidly intensified from a tropical storm to hurricane status as it moved over the Caribbean Sea. Matthew continued to intensify to a Category 5 storm and into one of the strongest in Atlantic basin history, which made landfall and devastated portions of The Bahamas, Haiti, Cuba, and the eastern United States.

“In both countries, the extent of the damage was severe,” said Skerrit, who was accompanied by the CARICOM Secretary-General, Ambassador Ambassador Irwin LaRocque and the Executive Director of the Caribbean Disaster Emergency Management Agency (CDEMA), Ronald Jackson.

He noted that the Government of Haiti reported more than 500 deaths along with 1.5 million people in urgent need of humanitarian assistance, including 120,000 families whose homes were destroyed or severely damaged.

The worst of the devastation occurred in the agricultural belt, which affected the food supply of the country.

“Agriculture and fishing were also badly affected in The Bahamas along with homes and infrastructure on the three islands which were hardest hit,” Skerrit described.

“The damage was estimated at more than 500 million dollars. It is my hope that the recovery process is well underway to reconstructing the lives and livelihoods of all those affected.”

Prime Minister of The Bahamas Perry Christie described how his country also faced a 600-million-dollar assessed impact from a Category 4 hurricane (Joaquin) in 2015 and encroachment by the sea with Hurricane Matthew a year later.

The Bahamian leader said special consideration needs to be given by the international financial institutions to the unique circumstances of the country.

“Our people are spread over a hundred thousand square miles of ocean [and] as we modernize we began to feel the effects of having rich people in our countries drive our economy and the measure of our economy on the basis of per capita income. And we were being graduated to the point where we are not qualified for concessionary loans,” he explained.

“There is this paradigm that lumps the country together and does not take into consideration the unequal development that exists in our country. The people who live on the island of New Providence are entirely different to those on the remote islands.

“We are judged harshly. When there is a 600-million-dollar assessed impact from a hurricane, and an encroachment by the sea as happened with Hurricane Matthew, the country has to withstand the impacts and then you are downgraded because they say there is no assurance you are going to be able to have the revenue. These are the challenges that the countries in our region face,” Christie added.