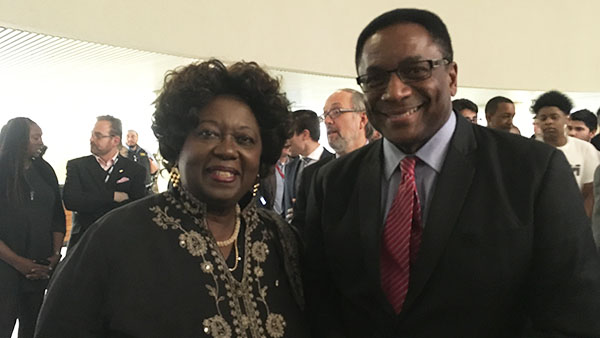 Former MP Jean Augustine, who was instrumental in having Black History Month proclaimed in Canada, and Michael Thompson, the only Black city councillor at City Hall. Photo credit: Neil Armstrong.

TORONTO, Ontario Friday, March 3, 2017 — An exhibition, featuring artifacts found during an archaeological dig of the new Toronto courthouse site in 2015, and which unearths the history of the Black community in the 1800s, will rotate in the rotunda at City Hall over the next five years.

Mayor John Tory made the announcement at a Black History Month reception he held at Toronto City Hall on February 22. The exhibit is presented by City Hall and Infrastructure Ontario (IO).

The excavation recovered tens of thousands of artifacts related to the site’s history as part of St. John’s Ward, or “The Ward.”

The site was inhabited partly by prominent members of Toronto’s early African-Canadian community and was home to refugee slaves who escaped via the Underground Railroad in the mid-19th century. 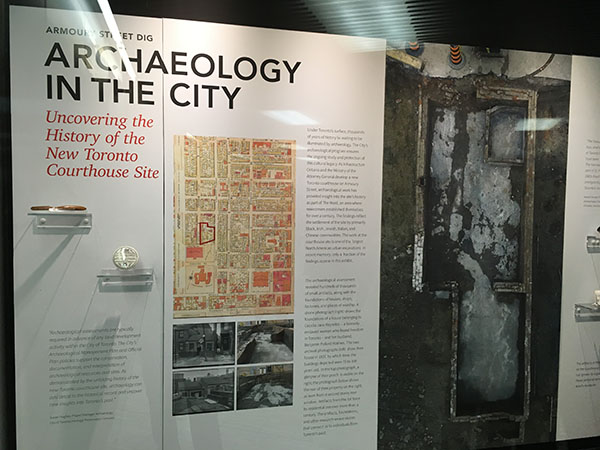 One of the displays of the exhibition showcasing artifacts from the archaeological dig behind City Hall. Photo credit: Neil Armstrong.

Many families of Irish, Chinese and Russian-Jewish descent also settled on this block, up until the mid-20th century.

Due to the artifact collection’s considerable size, variety, and degree of preservation, the archaeological assessment of the new Toronto courthouse site has provided an unprecedented level of insight into Toronto’s early multicultural history.

Recognizing the importance of the site’s history, and the vested personal interests of the communities with ties to it, IO struck a Heritage Interpretation Working Group.

Mayor Tory told those gathered at the City Hall reception that there are greater things to come in the future, where the artifacts are concerned, so that people can see them and learn about Black history. 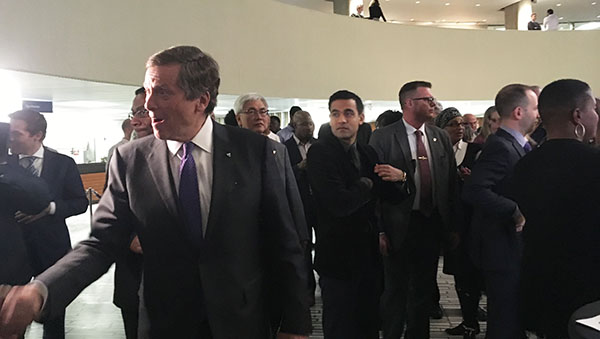 He said the exhibit arose out of a conversation he had with author, John Lorinc, who wrote the book, “The Ward,” a story about the historic area, which included references to the important role of the Black community in the Ward, and the Ward at the time.

Tory said Lorinc expressed his concern about how they would treat the wonderful artifacts that were found on the site. 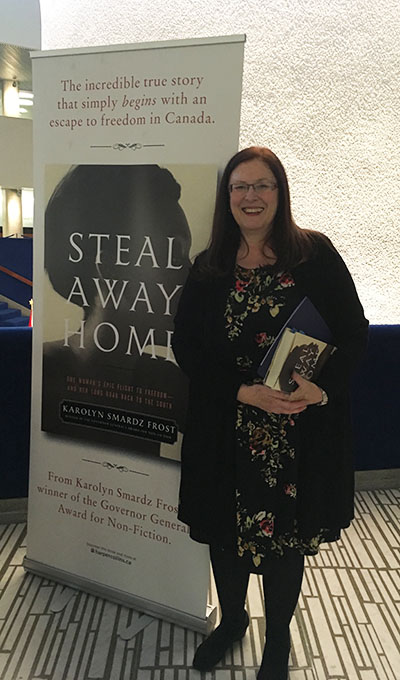 Historian and author, Karolyn Smardz Frost, signed copies of her new book, “Steal Away Home.” All proceeds from the sale of the book that evening went to the Ontario Black History Society. Photo credit: Neil Armstrong.

The mayor spoke to Ontario Premier Kathleen Wynne about the artifacts and said she immediately took an interest in the project and spoke to Infrastructure Ontario, resulting in “everybody working together to make sure we preserve and display this important part of our history.”

Councillor Michael Thompson, who emceed the event, said he and the mayor spoke earlier with Wynne, who attended the reception briefly, and thought about what would happen after the five-year display of the artifacts.

“Do we see that these artifacts will be put in boxes and put in dark rooms and will not be able to help to tell the story to Torontonians?” Thompson asked.

A man in the audience shouted, “No,” – a response endorsed by Thompson.

“As the most diverse city in the world, when we talk about Black history, we’re not saying that this is history that only blacks need to understand. That narrative would be too narrow. We’re saying it’s the history that everyone has to understand,” said the councillor.

They include remnants of the British Methodist Episcopal Church, which was founded in 1845 by prominent African Americans who fled slavery and came to Canada by way of the Underground Railroad.

Councillor Thompson urged the young black people in the audience to understand that the “contributions of their forefathers and mothers have been long-lasting in this great city.”

He noted that Toronto’s Black community has deep roots in the history of the city, highlighting that Toronto’s first taxicab was designed, built and operated by an escaped slave from Kentucky [Thornton Blackburn], and that in 1893 William P. Hubbard, a black man, was the city’s alderman.

Historian Karolyn Smardz Frost, who won the Governor General’s award for non-fiction in 2007for her book, “I’ve Got a Home in Glory Land: A Lost Tale of The Underground Railroad,” introduced her new book, “Steal Away Home,” which took her 10 years to write and tells the story of Cecilia Jane Reynolds, an African American slave who escaped when her owners visited Niagara with her.

Reynolds lived in St. John’s Ward, and the foundation of her first home was unearthed in the excavation of the site, which stood for many years as a parking lot.

Jean Augustine, the first black woman elected to the Parliament of Canada in 1993 and whose motion in the House of Commons resulted in Black History Month being celebrated throughout the country, pondered the way forward for the Black community.

Augustine said there are some concerns that the community needs to see addressed as it moves ahead and “to ensure that the bright young people in our midst get what is necessary to move them forward.”

Meanwhile, Nikki Clarke, president of the Ontario Black History Society, said it was a privilege to have seen the tangible evidence of a vibrant multicultural community under the surface of a parking lot.

“I’m absolutely amazed by the artistry of the plates, the figurines, and the children’s toys. We are so fortunate to have these artifacts for all communities to witness and from this exhibit we can learn from our past to better shape our future,” she added. 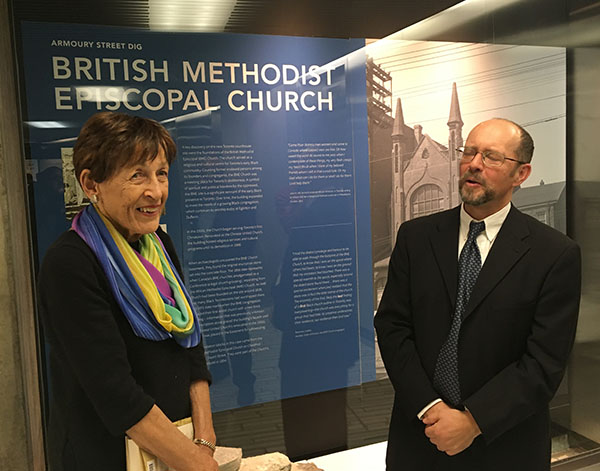 Toronto’s first Black female councillor, Bev Salmon, who served when the city was called Metro Toronto, and Wayne Reeves, Chief Curator, City of Toronto Historic Sites, in front of the display about the British Methodist Episcopal Church, an important place for the early Black community in Toronto in the 1800s. Photo credit: Neil Armstrong.

Ehren Cory, the newly appointed President and CEO of Infrastructure Ontario, said when they started to work on the project they knew about the history of this area “but even we were literally surprised by how much we found, the richness of the history, the stories that it started to tell.”

He said the project is a great reminder for Infrastructure Ontario in engaging with communities, in this case to capture the history and figure out how to best tell the stories, the way they are displayed in the exhibit at City Hall.

Poet, Nadine Williams, read her poem, “The Fabric of Our Being,” which concluded with the song lyrics, “it is a hard road to travel and a mighty long way to go.”

The reception was co-sponsored by Infrastructure Ontario and the Ontario Black History Society.