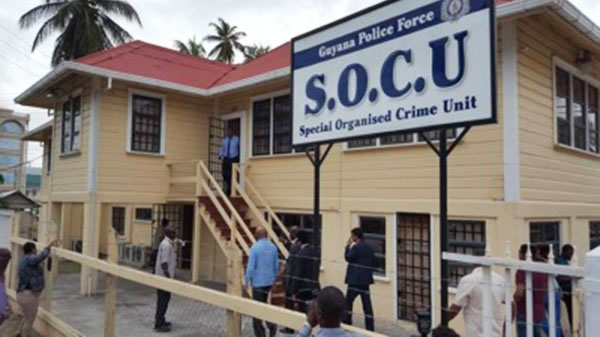 As he was being escorted away by officers, Luncheon told reporters that “we are fully supportive and cooperating with the police in their investigations.”

Luncheon was taken away from the Office of the Opposition Leader in the presence of Jagdeo and former president, Donald Ramotar, as well as former attorney general, Anil Nandlall.

The police said he was being arrested for the alleged misappropriation of state assets and conspiracy.

The move by SOCU comes less than 24 hours after Nandlall had written to the investigating body that the members of the former government would make themselves available for questioning at the Leader of the Opposition’s office instead of at the SOCU headquarters.

Jagdeo, Luncheon and Persaud were later released. they were not required to post bail.

Prior to his arrest, Jagdeo told reporters that “this act will long be remembered as a grave injustice,” and that the arrest of Luncheon had nothing to do with corruption but about attacking those who are resisting the government.

Several former members of the last government, including Jagdeo, have sprawling properties in the area that was developed, exclusively for them, and media reports here said that other persons who were also offered land in the area and took the offer up, are also to be questioned by SOCU.

A forensic audit into the land deal, found that the recipients underpaid for the seaside lands by more than GUY$250 million (One Guyana dollar =US$0.004 cents).

The audit report also pointed to the subsequent sale of the lots acquired by at least two former ministers for GUY$100 million and GUY$90 million respectively.

The report noted that in 2010, the PPP government, through NICIL, also spent more than GUY$200 million to develop the area.