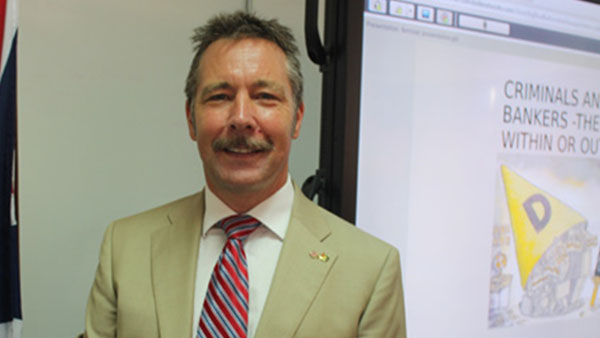 British crime expert, Dr. Sam Sittlington, above, “is at SOCU in an advisory and training capacity and not in an operational role”, says England's diplomat to Guyana. Photo contributed.

British High Commissioner to Guyana, Greg Quinn, said that the expert, Dr. Sam Sittlington, “is at SOCU in an advisory and training capacity and not in an operational role”.

Former members of the last government, who have been brought in for questioning or arrested as a result of the probe, have accused Sittlington of directing the investigations and that he was observed celebrating the actions of the SOCU at a café on Wednesday night.

“That was not the case,” the British diplomat said, adding that when the expert spoke to the media, earlier this week about the probe, he was trying to be helpful in explaining the legal basis and rights on which SOCU took the actions.

“In talking to the media Dr. Sittlington was trying to be helpful in explaining the legal basis and rights on which SOCU took the actions they did. It would be wrong to interpret this as Dr. Sittlington being involved in the investigations themselves. He was not,” said Quinn.

Former attorney general, Anil Nandlall, in an article published online, claimed that staff members of the British High Commission were at the Oasis Cafe, on Wednesday night, as part of a celebration for Sittlington and local government officials.

Earlier this week, the government brushed aside allegations of political interference in the police investigations, saying members of SOCU have been “meticulous, fair and independent” and that the accusations against the former ministers and officials are “immensely serious”.

“The Government notes spurious allegations of political vendetta and harassment and dismisses same, as SOCU is operating independently and without any interference or direction,” the statement noted, adding that the government looks forward to a thorough and comprehensive investigation and for the law to take its course and justice to be served.

The government said it is also maintaining its position that “the assets of the state belong to the people of Guyana and under no circumstances will it condone or overlook any action which resulted in the improper, illegal or unjust distribution of same”.

Several former members of the last government, including former president Bharrat Jagdeo, have sprawling properties in the area that was developed, exclusively for them, and media reports here said that other persons who were also offered land in the area and took the offer up, are also to be questioned by SOCU.

A forensic audit into the land deal, found that the recipients underpaid for the seaside lands by more than GUY$250 million (One Guyana dollar =US$0.004 cents).

The audit report also pointed to the subsequent sale of the lots acquired by at least two former ministers for GUY$100 million and GUY$90 million respectively.

The report noted that in 2010, the PPP government, through the National Industrial and Commercial Investments Limited (NICIL), also spent more than GUY$200 million to develop the area.

Today, the former Guyana Defence Force (GDF) Chief of Staff, Rear Admiral Gary Best, and former Region 10 Chairman, Mortimer Mingo, as well as the Director of Public Prosecutions, Shalimar Hack, and her husband, Moenul Hack, were among those questioned as a result of their land deals.