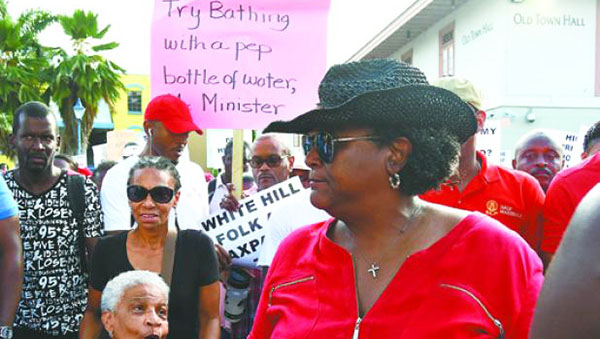 An estimated 10,000 Barbadians participated in what was dubbed the “March of Disgust” yesterday. Led by opposition leader, Mia Mottley, and other members of the BLP, the message to the government was “enough is enough”.

Led by opposition leader, Mia Mottley, and other members of the BLP, the message to the government was “enough is enough”.

The march started at Jubilee Gardens and ended there with a rally, late Saturday, during which Mottley said Barbadians cannot wait until the general election is constitutionally due.

A general election is constitutionally due here next year.

“Having taken instructions from you, the people, we are now going back to talk with the other partners in this country (and tell them) that Barbadians cannot take 51 more weeks of this.

“We will resume consultation with the social partners. They don’t invite us to the meetings, but we will ask to meet with them.”

The Opposition Leader also said that she would be seeking further feedback from the marchers, who she asked to consult with other Barbadians on the way forward.

“I am not taking any further action until you come back to me with a clear message, not just from the 10,000 here, but from the other people. I am asking you to go and be missionaries. In the same way all of us love our country, let us go beyond the extra call of duty, put in that extra bit of work, talking. Talk to the people, and you get the message to us and we will go back to the social partners, and we will return and plan our next move and come back to you.

“I believe that if you stay true, and do what we ask you to do, that we will be able to get rid of this incompetent government ….” she said.

Following the country’s most recent downgrade from the international lending agency Moody’s International on Thursday, Mottley blamed the Prime Minister for the current state of affairs.

In her response ,the opposition leader urged supporters to protest “and show this government that you are fed up with their indifference; fed-up with their incompetent management of our great country. We need to show them that we have had enough,” she then said.