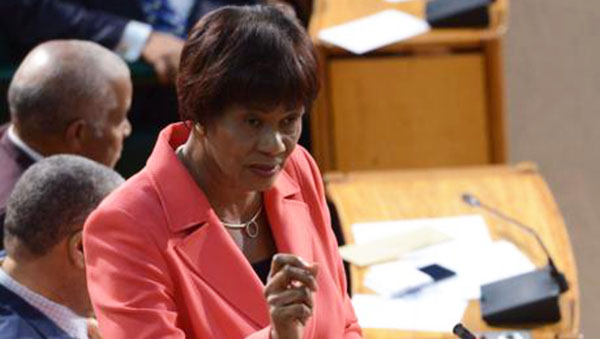 “This is ‘tax-perity’ gone wild, said Simpson Miller, as she made her final contribution to the 2017/2018 budget debate as opposition leader, today.

She accused the government of taxing group health insurance and fuel, among other things.

“The people were promised no new taxes to implement the $1.5 million tax threshold. Yet in only 12 months, the people have been devastated with over $29 billion in new and unnecessary taxes to finance the so-called give back,” adding that “the administration’s version of prosperity is a fleeting illusion to be pursued but never attained.”

“It is the reckless political promises that were made that has caused us to be at this point today. We warned that if the tax threshold was lifted, you would have had to impose new taxes on the backs of the people – that’s what we said. This is what is now happening. Now hundreds of thousands of Jamaicans will have to pay even though they will not benefit.

They will have to bear the costs of your recklessness – this could have been avoided. It is the biggest political trick to have ever been perpetrated on the Jamaican people,” she said.

The former Prime Minister also expressed disappointment at an election promise made by Holness that crime will be addressed.

“I am disappointed that after one year in office, this government has not delivered the promised crime plan, this is clearly not good enough.

“I am expecting that when the Prime Minister speaks next week, he will announce more resources for our security and intelligence teams to outmatch, outwit and out maneuver the criminals.”

She noted that social issues are the “root cause” of crime and violence and insisted that “every single Jamaican has a vested interest in the fight to defeat the spiraling crime”.

On the issue of crime and women, the opposition leader called for the increased protection of women.

“If necessary, we need to establish a committee with persons from both sides and meet with security forces to see what is causing so many murders in the country. It had seized, but it is rising again. Too many of our women are being murdered and it’s disheartening…too many have been victims of domestic abuse, rape and murder. We are now at a point of crisis.”

Simpson Miller who also reflected on her legacy, said the moment was “bitter sweet”.

“I’ve seen the good, the bad, the happy and the sad, but above all I’ve had an incredible journey of service to my beloved people and country. Empowering and uplifting the people has been central to me…from the poor and dispossessed to the rich and the powerful. I remain as convinced today as I was 43 years ago that beyond racial origins we must believe in ourselves and our common destiny when we work together.”

The former Prime Minister, who was lauded, not only by members of the opposition PNP, but legislators from the Jamaica Labour Party, said that she will never stop believing “in the potential of the Jamaica people and their capacity for greatness…I have always believed that it is the people who have the ultimate power, not us. It is on their behalf and in their interest that we must always exercise power”.

She will step down as opposition leader on April 2, paving the way for the ascent of Dr. Peter Phillips.