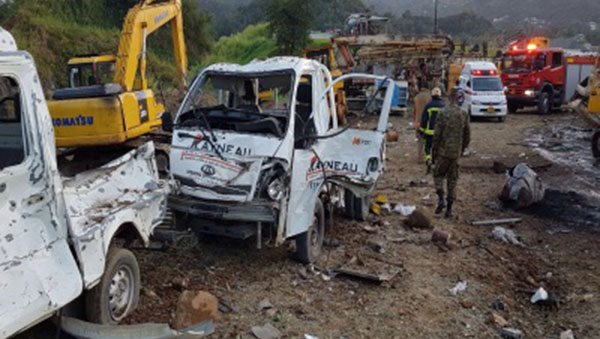 CASTRIES, St. Lucia, March 22, 2017 (CMC) – The RG Group of Companies, today, said it would give its “unwavering support and cooperation to the investigators” probing the explosion that left at least four people dead, more than 20 injured and at least four others airlifted to the neighbouring French island of Martinique.

Acting Police Commissioner, Milton Desir, told a news conference, today, that evidence obtained from the scene of the explosion at Cul de Sac, four miles east of here, would be sent to a laboratory in the United States for examination.

The explosion on Tuesday evening was heard miles away, shattered glass windows and doors of nearby businesses, and destroyed offices and several pieces of heavy duty equipment on site.

Acting Chief Fire Officer, Joseph Joseph, told the news conference it was “almost impossible to state what caused the explosion” and everyone should await the outcome of the investigations by the authorities.

Media reporters here said that the explosion may have been triggered by workers engaged in a welding operation, in close proximity to a container loaded with explosive material, including dynamite.

Chief Medical Officer, Dr. Merlene Frederick, said people were still coming to the Victoria Hospital for treatment,today, and warned “we may have some unfavourable outcome, but we hope that this may not exist”.

She praised all the rescue teams, as well as the workers within the health sector, who performed beyond the call of duty. She urged people to donate blood to the hospitals that are still coping with a number of people injured as a result of the explosion.

In a statement, the RG Group of Companies said it was “overwhelmed by the loss of our family and team members.

“The loss of life suffered is immeasurable. We stand in support of all of the grieving families and staff who work directly with those who lost their lives. The incident resulted in fatalities and in injuries, necessitating immediate emergency response services whereby all injured persons were quickly dispatched to the hospital for medical treatment.”

The group said that at this stage “we give our unwavering support and cooperation to the investigators as they assist and support us in finding out the cause of this unfortunate accident.

“Our main interest at the moment is attending to, and working with, the families of the deceased and injured and further mourning with the nation for the loss of valued souls.”

Earlier, Prime Minister, Allen Chastanet called on the nation to pray for the families of the victims. 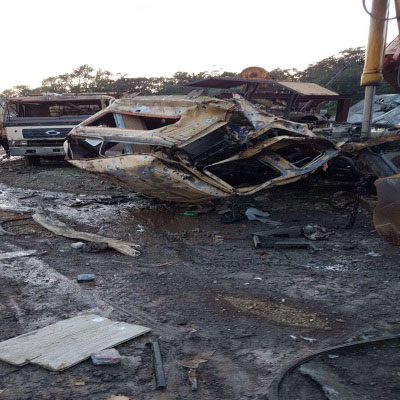 “Our hearts go out to those who lost loved ones and those who are still waiting to find out information about their family members. You are all in our prayers in this difficult time. We must all support each other at this time and pray for our fellow St. Lucians,” Chastanet said.

“We must say thanks to the emergency personnel, the police and fire officers, who responded to the incident and who are still working tirelessly … at the site to find persons. The staff, the nurses and doctors, of the Victoria Hospital, who responded, some without being called and who are working overtime to attend to the injured must be thanked for their selfless dedication in the wake of this crisis,” he said, adding that the incident has taken the nation by shock.

The main opposition St. Lucia Labour Party (SLP) also expressed its “deepest condolences to the relatives and friends of the employees who lost their lives in the unfortunate and tragic circumstances” and the staff of the company “who are suffering from the shock and pain of the loss of their friends and co-workers who perished in these horrific circumstances.

“We wish the injured a complete and speedy recovery and thank the medical and emergency respondents for their hard work under trying circumstances.”

Opposition Leader, Phillip J. Pierre, said he hoped the company and staff “can overcome this terrible set-back and continue to make their contribution to our island St. Lucia,” acknowledging “it will not be easy “