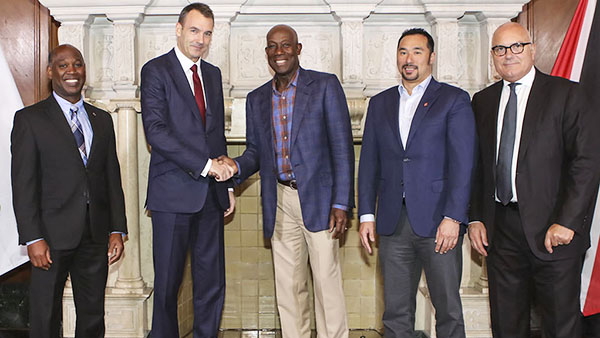 PORT OF SPAIN, Trinidad and Tobago, March 30, 2017 (CMC) – Prime Minister, Dr. Keith Rowley, met with top executives from BP, one of the world’s leading integrated oil and gas companies, yesterday, in the first of a series of meetings with industry leaders in the energy sector.

The Office of the Prime Minister says the talks centered, specifically, around developing strategies for expanding the downstream industry, offshore development and BP’s continued commitment to investing in Trinidad and Tobago, despite the challenges facing the economy.

Rowley, who expressed his commitment to charting the way forward, towards ensuring the sustainability of the energy sector in Trinidad and Tobago, was expected to engage with senior executives from Shell, today.

During the visit, the delegation will also meet with officials from EOG Resources.

Earlier this month, Rowley said his administration is hoping a new gas agreement, signed with Venezuela, would come on stream, as early as July, to avert further closure of energy plants at Point Lisas in Central Trinidad.

He said the agreement, which also involves the multi-national oil company, Royal Dutch Shell, “will bring that gas to market in the shortest possible time”.

Shell is expected to build a 17 kilometre (10.6 miles) pipeline from Venezuela’s shallow-water Dragon gas field to its Hibiscus platform, off the north coast of Trinidad.

He said the talks with ExxonMobil was necessary, given the US-oil giant’s involvement in the emerging Guyana oil and energy sector, and Trinidad and Tobago is positioning itself to be a player in the industry of that Caribbean Community (CARICOM) country.

Rowley said that with Guyana expected to be producing at least 100,000 barrels of oil, daily, during the early stages of its oil industry, Trinidad and Tobago, with a refinery, could be in a position to assist in that regard.