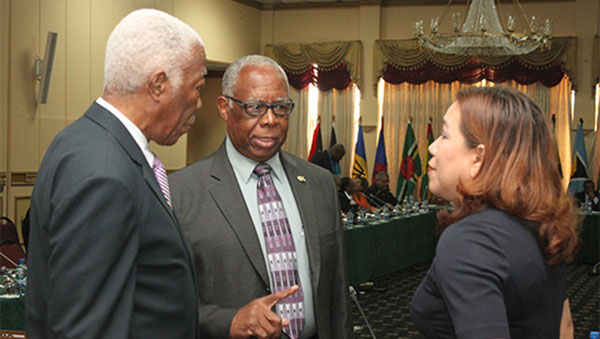 Karl James (centre), Chairman of the Sugar Association of the Caribbean, chats with Arnold J. Nicholson (left) former Jamaica Minister Of Foreign Affairs And Foreign Trade Of Jamaica, and a guest, at the CARICOM Council for Trade and Economic Development (COTED), at its Thirty-Eighth Meeting held in Georgetown, Guyana, May 9-10, in 2014. Photo credit: CARICOM.

BRIDGETOWN, Barbados, March 31, 2017 (CMC) – The Sugar Association of the Caribbean (SAC) today, said regional sugar-producing countries had recorded a significant increase in production for February, as compared to the same period last year.

It said that Belize led the production figures with a total of 22,465 tonnes, as the region produced 43,697 metric tonnes, as compared with 26,690 tonnes last year.

Jamaica was the second best Caribbean sugar-producing country with a total of 17,317 tonnes, followed by Guyana with 3,915 tonnes. The other SAC member, Barbados, was not in production during February.

The SAC said that last month, member countries exported 2,341 tonnes of sugar to the Caribbean Community (CARICOM) and the European Union (EU) and noted that for the current crop, to date, the region has exported 86,564 tonnes to the EU in bulk, 22,387 tonnes to the United States and 18,289 tonnes to CARICOM.

“Since 2016, both Guyana and Belize have been shipping bagged sugar to the EU. All three producers have been supplying sugar to the CARICOM, as planned,” said SAC Chairman, Karl James, noting that the goal of supplying Caribbean markets, while maintaining exports to the EU and the United States, continues to be realised.

Earlier this month, the SAC urged regional countries to provide some level of protection to the Caribbean sugar industry, even as it acknowledge the need to modernise the sector as impending changes in Europe could result in a drop in the price for the commodity.

A joint statement, issued by the SAC and the Caribbean Council following a two-day meeting in Jamaica that examined the Caribbean Sugar Industry Post-2017, noted that the region needed to “urgently refocus our attention on our own market in the region”.

“Governments around the world give tariff protection to their own sugar industries, yet in the Caribbean we are currently losing out to imported sugar from outside the region. It is time to modernise our approach to sugar.

“The net cost effect of tariff protection to consumers will be negligible, but it will give our industry the ability to attract investment, mechanise the industry and provide quality jobs and a sustainable future for the sector,” the statement said.