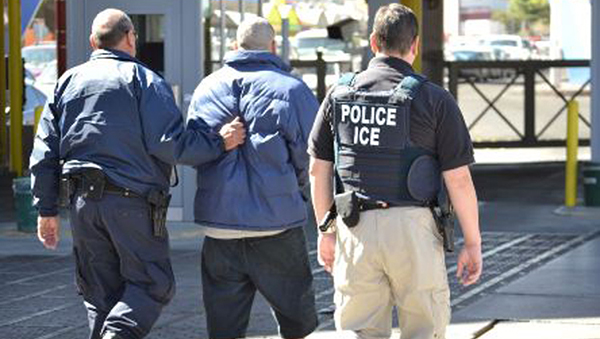 NEW YORK, New York April 1, 2017 (CMC) – When Nevisian, Floyel Stapleton, appeared in a Manhattan Criminal Court in New York for a routine hearing in his misdemeanour assault case, he was stunned to be met by US federal immigration agents, as he left the courtroom.

“I didn’t know they were there. They were in plain clothes. They had no badges, and they arrested me when I was walking out of the courtroom. They just asked my name and they arrested me,” 39-year-old Stapleton told the New York Daily News, from an immigration detention center in Hudson County, New York.

“They are trying to deport me. The situation sucks,” he adds.

Stapleton’s arrest, on February 21, by the US Immigration and Customs Enforcement (ICE) agents, comes amid a growing debate about whether immigration agents should be allowed in New York City’s 31 courthouses at all.

US President, Donald J. Trump, has promised a surge in immigration enforcement — creating an atmosphere of fear among many of New York’s immigrant communities — that extends to the courtroom.

The New York Office of Court Administration (OCA) has confirmed only two arrests by ICE in city courthouses, since mid-February.

But ICE agents have also been spotted in court on three other occasions, inquiring about certain defendants or lingering in arraignments.

“Since we began monitoring the situation, we have verified five interactions with defendants in New York City court facilities, resulting in two arrests,” he added.

Stapleton was convicted multiple times for selling drugs and domestic violence. He told the New York Daily News, that ICE attempted to deport him in 2007, but released him for reasons that were unclear.

Stapleton came to the United States when he was 13. He lived in Harlem with his disabled mother and helped pay the rent. He has left behind a one-year-old girl, as well as a daughter who had to stop attending Howard University in Washington, D.C., because she couldn’t pay tuition.

Stapleton’s sister, who declined to give her first name, said calls to lawyers had not been helpful, because she had so little information about what had happened to her brother.

“I don’t have any information to give them. I can’t tell them why he’s there, what happened. It’s scary”

Public legal defenders say OCA’s figures on ICE sightings do not accurately reflect the magnitude of the problem.

Some immigrant clients are scared to appear in court as required and that lawyers are overhauling legal strategies in light of ICE’s presence.

“We have also had clients arrested outside the courthouse on the front steps, in the hallways and as they’re walking away down the street toward the subway,” said Lori Zeno, co-founder and managing director of Queens (New York) Law Associates. “The court system in this country is supposed to be neutral.”

“The presence of ICE in the City’s courthouses is deeply disruptive to court operations and our criminal justice system,” Mark-Viverito, spokeswoman Robin Levine, said.

“Enforcement activity that might discourage victims from coming forward, or even defendants from showing up for their court date, could undermine public safety for all of us,” she said.

Even as legislators and immigrant advocacy groups express outrage over the Trump administration’s immigration policies, US Attorney General, Jeff Sessions, has announced the expansion and modernization of a program to deport immigrants, including Caribbean nationals, in US federal correctional facilities.

The US Department of Justice (DOJ) said the Institutional Hearing Program (IHP), announced by Sessions, on Thursday, identifies removable criminal immigrants who are inmates in federal correctional facilities.

IHP provides in-person and video teleconference (VTC) immigration removal proceedings, and removes the immigrant on completion of sentence, rather than releasing the immigrant to an Immigration and Customs Enforcement (ICE) detention facility or into the community for adjudication of status, the DOJ said.

“Bringing an Immigration Judge to the inmate for a determination of removability, rather than vice versa, saves time and resources and speeds hearings,” the DOJ said, stating that the program is coordinated by its Executive Office for Immigration Review (EOIR), the Bureau of Prisons (BOP) and ICE.

One of Trump’s first executive orders promised a weekly recounting of the crimes committed by undocumented Caribbean and other immigrants and a list of the recalcitrant local law enforcement departments that failed to turn those people over to US federal officials, according to the New York Times.

Last week, the US Department of Homeland Security delivered the first report.

But rather than provide a complete tally, it contained misleading information that only prompted confusion and defiance from law enforcement officials from the jurisdictions in question, the New York Times said.

The report, which covers January. 28 to February 3, shows that ICE issued 3,083 detainers, which are requests to local police departments to hold undocumented immigrants and legal permanent residents who could be deported.

The report showed, however, that only 206 of those detainers were declined by local law enforcement agencies.

She said that public safety depends on the trust between police and community, adding that the city’s police officials “voluntarily respond to requests from federal immigration authorities when they’re looking for an individual in our custody who is a serious threat to the safety of all New Yorkers, immigrant or otherwise”.