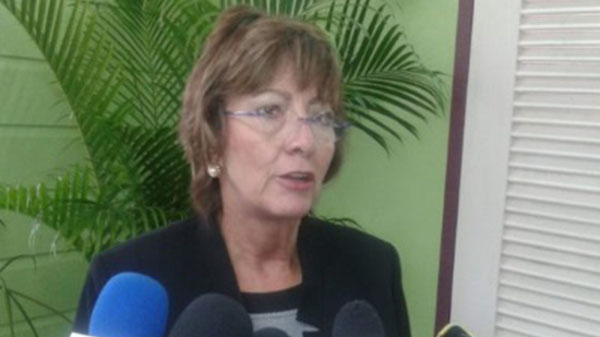 US Ambassador to Barbados and the Eastern Caribbean, Linda S. Taglialatela.

US Diplomat Urges St. Lucia To Move On IMPACS Cases

CASTRIES, St. Lucia, April 6, 2017 (CMC) – The United States says, its relationship with St. Lucia could be further improved, if the island moves to resolve, quickly, the allegations of 12 unlawful killings by the police, during the period 2010-2011.

US Ambassador to Barbados and the Eastern Caribbean, Linda S. Taglialatela, told reporters that she is concerned that the so-called “IMPACS” matter has not yet been resolved.

“We hope it will be resolved in the near future,” she said,, adding that she has spoken with the new Director of Public Prosecution (DPP), Daarsrean Greene, on the issue.

“I am not sure where he is. I am not privy to where the case stands at the moment, but yes, I think if the case was resolved, we would have a better relationship, because, obviously, we can provide a lot more assistance to St. Lucia,” the US diplomat said.

In February, Greene promised St. Lucians that he has made “an extensive review…of the majority of the cases”, involving alleged police shootings on the island.

“In some instances I have written to the Commissioner of Police expressing my opinion. I must state that, many of these matters are still incomplete, in terms of the criminal investigations and, as such, I cannot disclose details of any findings of what, in particular, is missing from these investigations, as this would only prejudice the due process.”

In 2015, the then Kenny Anthony government said it had received a report of an investigation carried out by the Jamaica Constabulary Force (JCF) into the alleged extra-judicial killings by members of the Royal St. Lucia Police Force (RSLPF).

In 2013, the St. Lucia government enlisted the help of the Jamaican police to investigate the RSLPF. This came on the heels of the United States withdrawing security-related assistance, after claims of human rights violations.

In August 2013, Washington suspended all forms of assistance to the RSLPF, citing allegations of serious human rights violations.

“The Department of State has made a policy decision to withdraw training and material assistance to the Royal St. Lucia Police Force, due to credible allegations of gross human rights violations,” the US State Department said in a statement then.

As a result, Police Commissioner, Vernon Francois, was prevented from travelling to the US to represent the Regional Security Service (RSS) at a conference of Black Police Chiefs.