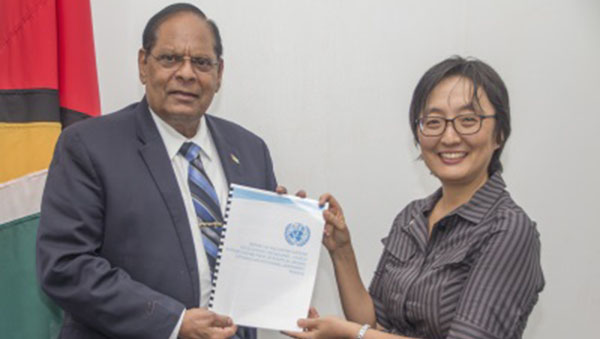 GEORGETOWN, Guyana, April 7, 2017 (CMC) – Guyana has been warned against rushing the process of constitutional reform. It has also been advised that the authorities need to factor in the size of the country, with regards to accessing all citizens, and the difficulties associated with reaching consensus.

The recommendation is contained in a report, handed to Prime Minister, Moses Nagamootoo, yesterday, by a United Nations Constitutional Reform Team that visited Guyana in February, to conduct a constitutional assessment mission, to advise the David Granger government and to provide UN decision-makers with context for its support.

A government statement, issued here, said that the report cites the constitutional reform process as an opportunity for social cohesion and nation building, around issues that affect all citizens.

It said the report speaks to the issue of risks associated with the process of constitutional reform and notes “Guyana has a history of racial division and ethnic-political conflict”.

The statement said that it is intended that the report will be presented to all stakeholders with whom the mission team engaged.

The report recommends that a successful constitutional reform process must emphasize meaningful dialogue, negotiation and compromise on the part of government, opposition and citizens.

“The report provides that the Constitutional Reform Commission (CRC) must be independent, representative and inclusive of civil society, that the public, at large, must be provided with opportunities to participate, and that public education on constitutional workings and reform is critical in the facilitation of effective participation”.

It said Guyana needed to factor in the size of its territory, with regard to accessing pockets of citizens, and the difficulties associated with reaching consensus.

Meanwhile, the draft Bill to establish the Constitutional Reform Consultative Commission is being reviewed by the Office of the Attorney General, and will be circulated to stakeholders, as soon as the preliminary revision is completed.

Prime Minister Nagamootoo has indicated that the proposed Bill would be sent to the Special Select Committee for further review, once it is tabled in the National Assembly.