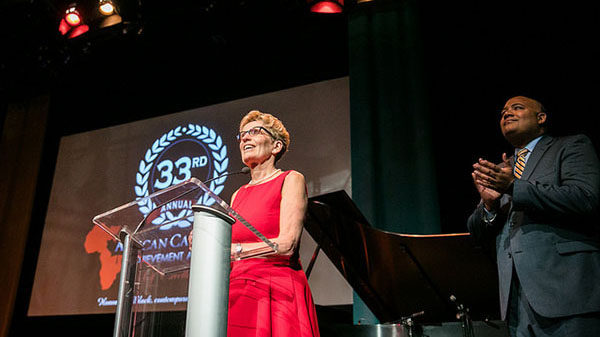 Ontario Premier Kathleen Wynne addresses the audience at the recent ACAA gala, while Michael Coteau, Minister of Children and Youth Services and the Minister Responsible for the Anti-Racism Directorate, looks on. Photo credit: Office of the Premier.

TORONTO, Ontario April 12, 2017 (PRIDE) — Ontario Premier, Kathleen Wynne, has commended Michael Van Cooten, Founder, Chair and CEO of the African Canadian Achievement Awards of Excellence (ACAA) on the important role he is playing in the African Canadian community — and by extension, the province.

“I want to acknowledge, with gratitude, the role that you have played — as the founder of the ACAA — in ensuring that the achievements of the African Canadian community are given their due recognition,” she wrote, in a letter, addressed to Van Cooten, in which, she also thanked him for inviting her to his organisation’s recent 33rd annual gala, held on February 25. 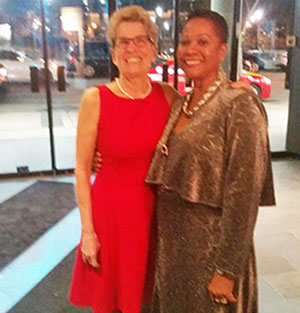 Premier Wynne, left, upon her arrival at the ACAA gala, is greeted by Donna Van Cooten, a registered nurse, who is the wife of ACAA founder and CEO, Michael Van Cooten.

“It is the pioneering efforts of people like you that have helped shape a better province for everyone,” she added.

Van Cooten, who says that he received the letter, dated March 27, early last week, admits that he was surprised when he saw the envelope from the premier of Ontario, and was “blown away” when he opened and read its content.

“Premier Wynne was the first provincial premier or prime minister to accept our invitation and attend the ACAA, in its 32-year existence, which I pointed out to her on the evening of the gala; and to also receive this letter of thanks and appreciation from her, also a first from any politician, has persuaded me that she is a class act,” said the ACAA founder.

He continued, “Since the event, we have received many accolades from individuals who had attended the gala, applauding the award recipients’ distinguished accomplishments and acceptance speeches, the superb entertainment — and the premier’s speech, which she gave without written notes and off the cuff.” 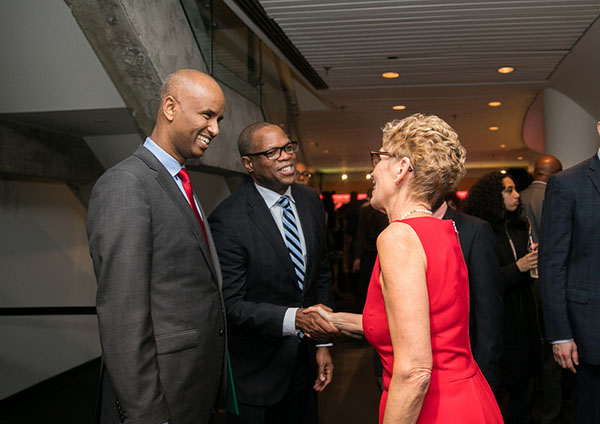 In her letter, which also included two photos taken at the gala, the premier indicated that she was honoured to attend the event and “was made to feel exceptionally welcome throughout my time there. I also greatly enjoyed the performances (by The Heritage Singers-Canada; son and father piano jazz duo, Quincy and Eddie Bullen; R&B composer/songstress, Shaina Sammone; and the Dance Caribe Performing Company) which made the evening more memorable.” 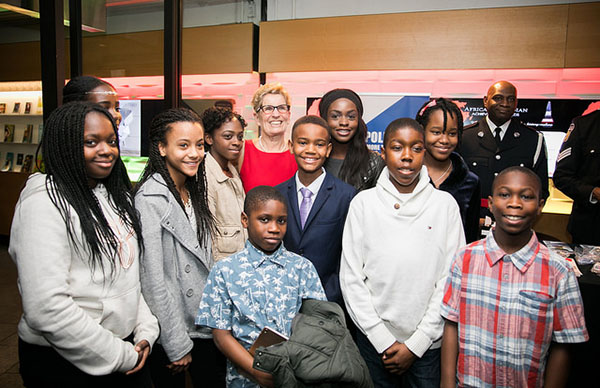 Premier Wynne was also a hit with the children. Photo credit: Office of the Premier.

Of the ACAA recipients, who the premier described as “very deserving award winners”, she elaborated that they are “not only a reflection of success, hard work and dedication, but also of the many spheres of endeavour in which the African Canadian community has excelled.” 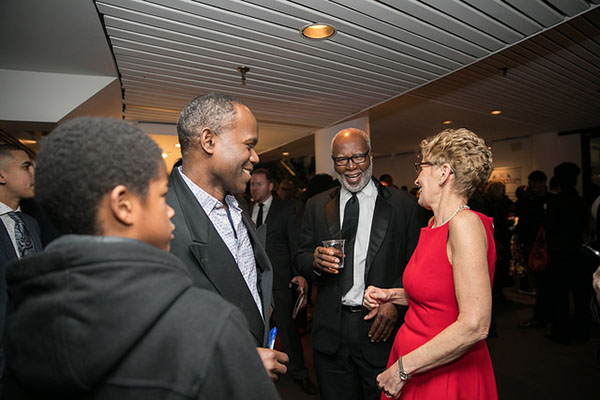 Peel District School Board Trustee, Eric Williams, second from right, who received the 2017 ACAA for excellence in Politics, shares a laugh with Premier Wynne, while other guests look on. Photo credit: Office of the Premier.

Premier Wynne also wrote that she was “delighted and pleased” to address the audience “about the Anti-Racism Directorate and its work, aimed at eliminating systemic racism in institutions, governed or regulated by the Ontario government,” noting that “With the recent unveiling of our three-year anti-racism plan, we will be taking concrete steps to build a safer and more equitable province.” 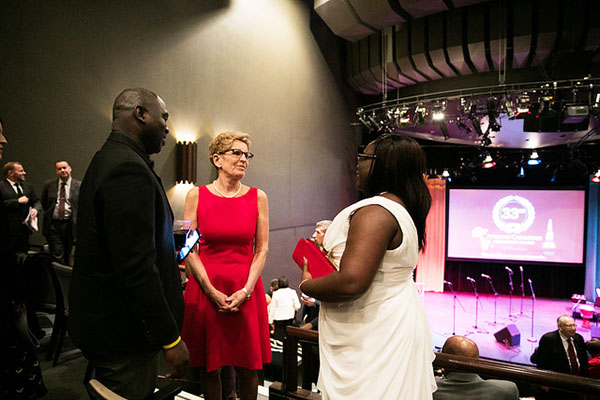 Consul at the Guyana Consulate in Toronto, Mishelle Butters, right, and her husband, Dwayne, chat with Premier Wynne during intermission at the ACAA gala. Photo credit: Office of the Premier.

“Many, who attended the event, have subsequently spoken to me about how accessible, genuinely-personable, warm and approachable the premier appeared. The common sentiment was one of surprise because, as one individual put it, ‘with her popularity at about 15 percent, I certainly did not expect such a decent, nice, authentic woman’,” revealed Van Cooten, who is also the founder, publisher and editor of Pride News Magazine. 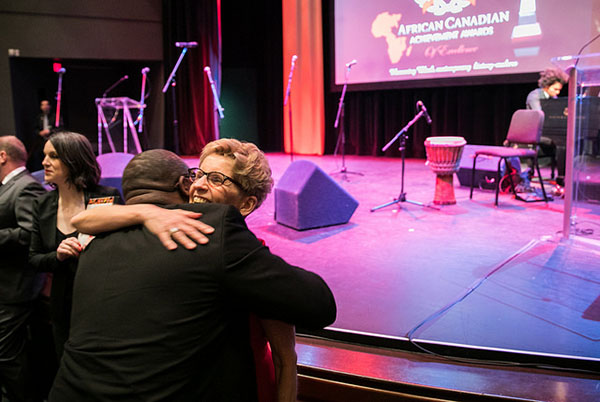 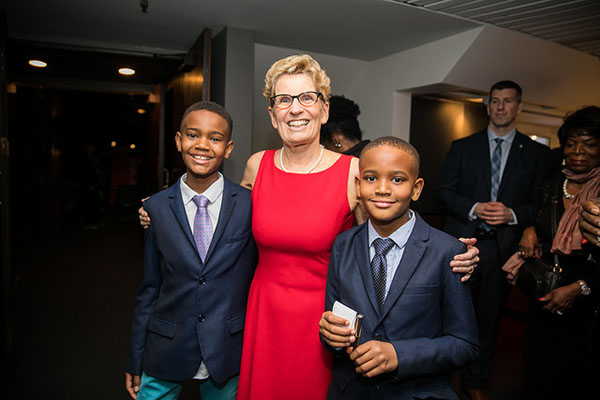 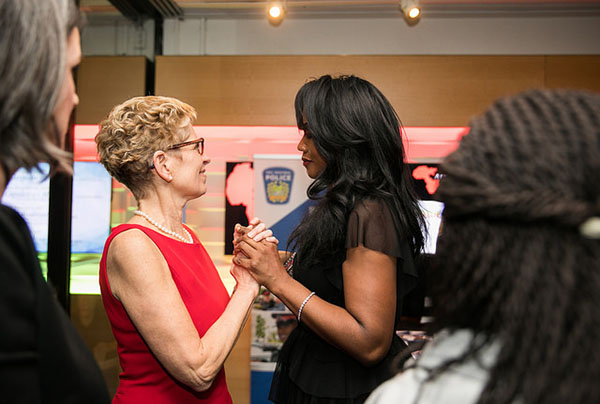 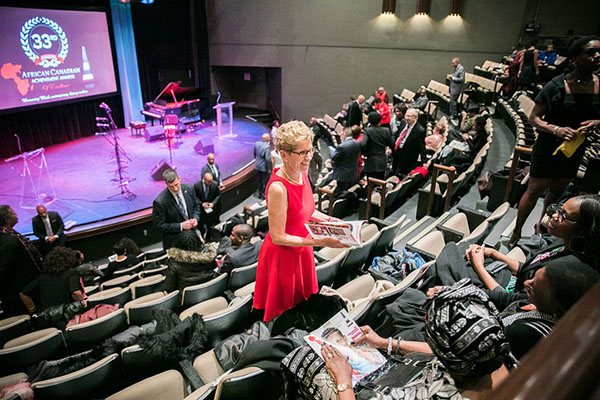 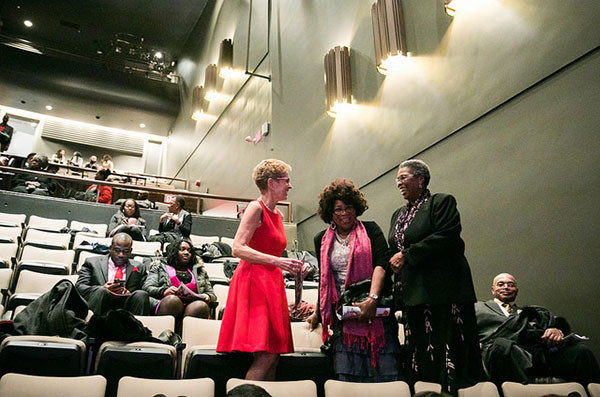