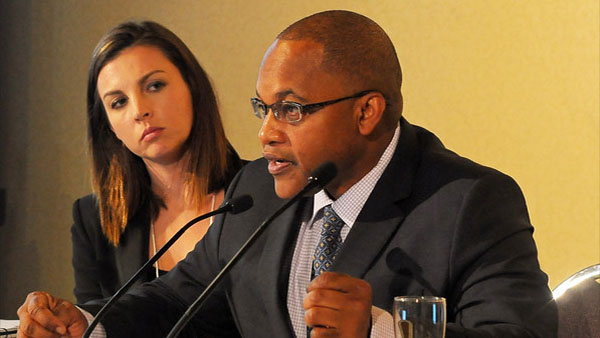 Justice Michael Tulloch speaks at one of the cross-province consultations in Thunder Bay, Ontario, while Danielle Robitaille, one of three Senior Counsels to Justice Tulloch, look on. The other two Senior Counsels were Jamie Klukach and Jodie-Lynn Waddilove. Photo contributed.

Meanwhile, the African Canadian Legal Clinic (ACLC) says the recommendations are “a significant step in increasing accountability and transparency in the police oversight system”.

On April 29, 2016, Justice Tulloch was asked by the government of Ontario to conduct an independent review of Ontario’s three civilian police oversight bodies — the Special Investigations Unit (SIU), the Office of the Independent Police Review Director (OIPRD), and the Ontario Civilian Police Commission (OCPC).

This followed public demonstrations of dissatisfaction with policing and police oversight, he noted in the executive summary of the report.

The 263-page report, containing 129 recommendations, was delivered to the Attorney General, Yasir Naqvi, on March 31 and released publicly on April 6.

The SIU investigates police-civilian interactions that result in serious injury or death to a civilian; the OIPRD oversees public complaints about the police in Ontario; and the OCPC primarily adjudicates appeals of police disciplinary hearings, among other things. 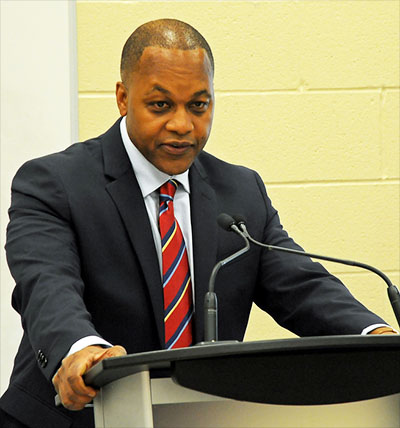 Justice Tulloch noted that the relationship between the police and the communities they serve is, at times, very complex.

“This relationship must be situated within its historical context in our modern, pluralistic society. For some communities, particularly Black and Indigenous communities, historical realities have led to a distrust of the police, a distrust that sometimes extends to the oversight bodies themselves,” he added.

He said modern policing is founded on public trust and “that trust is tested when the police cause a civilian’s death or serious injury, or behave in a manner that is seen to fall below the professional standards expected of them”.

Among the recommendations are: the civilian oversight bodies should have their own legislation, separate from the Police Services Act; that former police officers should not be excluded from working as investigators at either the SIU or OIPRD; and ensuring that the oversight bodies better reflect the diversity of the communities they serve.

On the matter of transparent and accountable criminal investigations, Justice Tulloch said public accountability is a crucial function of the SIU.

“For the public to have confidence in policing and police oversight, justice must not only be done, but also be seen to be done. That means investigations must be effective and impartial.

“It also means that members of the public must be able to carefully examine a decision not to charge, to assure themselves that the investigation was effective and impartial,” he reasoned.

He noted that, in his opinion, releasing an officer’s name, at the end of an investigation when that officer has not been charged, would do little to advance the SIU’s objectives.

Justice Tulloch also recommends that the SIU report to the public on every investigation, although the content of that reporting would depend on the nature of the investigation. 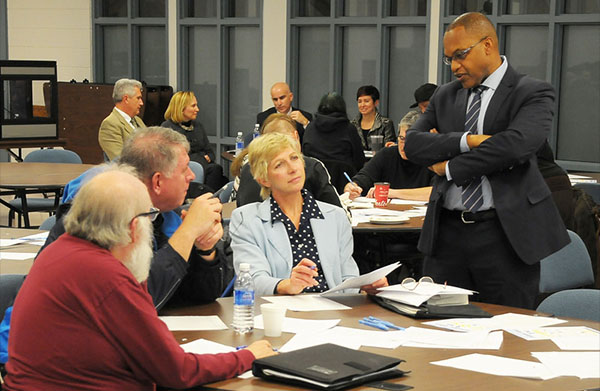 He has also recommended the release of past SIU reports, where no charges were laid.

Chapter 5 of the report, which examines effective criminal investigations, notes in the introduction that: “The SIU would not have come into existence in 1990 were it not for the advocacy of Charles Roach, Dudley Laws, the Black Action Defence Committee, and others; the protests of many, especially those from Black communities; and the deaths in 1988 of two Black men, Lester Donaldson and Michael Wade Lawson.”

The chapter states further that, “In 2016, after the SIU cleared police of any criminal wrongdoing in the death of Andrew Loku, a 45- year-old Black man, with mental health issues, who was fatally shot in his home, protests ensued once again. The public, especially Black communities, and groups such as Black Lives Matter, made it clear that they still lacked trust in the police and police oversight. People demanded change.”

Black Lives Matter Toronto held at 15-day protest, ‘tent city,’ outside Toronto police headquarters, last year, calling, among other things, for police accountability and a overhaul of the SIU.

As part of his mandate, Justice Tulloch was asked whether the police oversight bodies in Ontario should collect demographic data.

He thinks they should, and that the data they collect should include gender, age, race, religion, ethnicity, mental health status, disability, and Indigenous status.

“Data collection offers many benefits. It supports evidence-based public policy and decision-making, promotes accountability and transparency, and, if used properly, may build public confidence in policing and police oversight,” he says.

In a press release, the JCA noted that it hosted the first of Justice Tulloch’s 17 public consultations in September 2016.

It said community members shared their experiences with police oversight bodies and called for more openness, including public release of SIU Director’s reports, clear end-to-end information about the processes within each body, and proactive public outreach by the OIPRD to make the complaints process more accessible, especially for Black and racialized people, newcomers, people facing language barriers, and other marginalized groups. 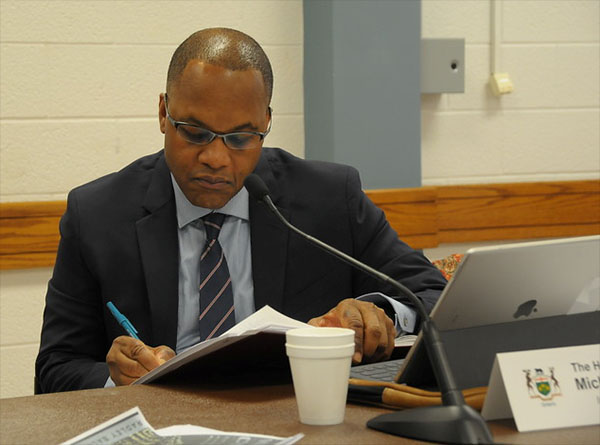 In deep thought: Justice Tulloch jots down some notes before addressing the public consultation meeting in Kitchener, Ontario. Photo contributed.

“The JCA’s Board of Directors and membership are heartened that these concerns are not only reflected in the final report, but addressed with concrete proposals. We are also encouraged that Justice Tulloch has moved the needle even further with many other wide-ranging recommendations that, once implemented, will lay the foundation for renewed public trust in the police and oversight bodies,” the release noted.

The JCA highlighted the recommendations that police oversight bodies have their own distinct legislation; that they are diverse in their composition; that they collect demographic data such as race, age, religion, mental health status, and disability to support evidence-based decision- and policy-making; that they enhance their cultural competency when interacting with a wide range of communities and individuals, including Indigenous peoples, Black and other racialized people, people affected by mental health issues, people with disabilities, and women, especially those facing gender-based violence.

Other key recommendations include the SIU concluding its investigations within 120 days and if not, updating the public then, as well as every 60 days thereafter; and, the OIPRD tracking complaints to identify officers with multiple complaints lodged against them.

The JCA says it commends the Ontario government’s early action on some of the most critical of Justice Tulloch’s 126 recommendations, by committing to releasing all past SIU reports on police interactions resulting in death and establishing a process to make future reports publicly available, as well as enabling mandated race-based data collection by police oversight bodies by supporting the proposed Anti-Racism Act.

“However, these are just first steps in a long road ahead to restore confidence in the ability of the SIU, OIPRD and OCPC to, effectively and fairly, represent Ontarians in the discharge of their duties,” it said.

The venerable organisation challenged the government to “stay the course and implement the full suite of recommendations”, and thanked Justice Tulloch and his team “for their thoughtful and thorough approach to advancing dialogue and action on this critical issue”. 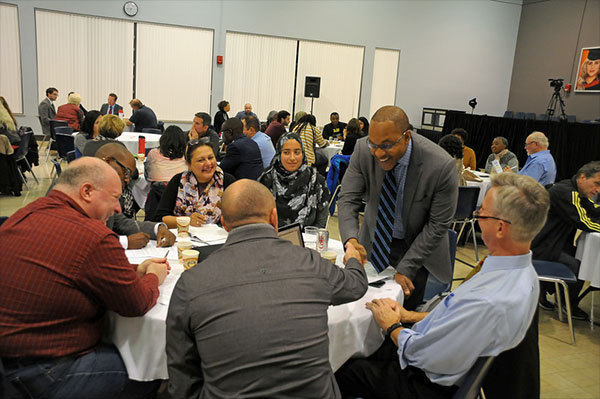 The well-travelled Justice Tulloch greets a group of the participants at the public consultation meeting in London, Ontario. Photo contributed.

Meanwhile, the ACLC welcomed Justice Tulloch’s recommendations to the government, however, Margaret Parsons, Executive Director of the ACLC says “the glaring absence of anti-Black racism in the report is of major concern to the ACLC.”

The legal clinic says the lack of accountability and transparency has led many in the African Canadian community to question the need for oversight, particularly when this oversight is shrouded in secrecy.

In this respect, the ACLC says it supports the recommendation that the SIU should release to the public past reports and make available reports on every investigation going forward.

“It was further recommended by Justice Tulloch that the SIU disclose the name of a subject officer, if that police officer is criminally charged. However, Justice Tulloch did not see the utility or relevance in releasing the name of subject officers who are investigated but not ultimately criminally charged. The rationale behind this is to protect the privacy and legal rights of these subject police officers and also to protect them from public retaliation, particularly in remote communities. Therefore, a police officer, who is investigated on several occasions but never criminally charged, will never be named. This is not in the interest of public accountability,” the ACLC added.

“In a democracy, accountability and transparency should not give way to protecting police privacy,” says Danardo Jones, Director of legal services at the ACLC.

According to Jones, a suspect police officer is no different, and this information will allow the public to draw its own conclusions about that particular police officer.

“There may be little legal utility in doing this, but, in a free and democratic society, this public exchange is of important social utility,” he stated.

The ACLC said Justice Tulloch responds to this criticism by establishing a disclosure regime for investigations that fall short of a criminal charge.

“The investigative methodologies will be disclosed, along with relevant facts, and evidence. The director of the SIU will also provide reasons for their decision. The officer, however, will never be named. His reputation will never be sullied, nor will he face public scrutiny for being suspected of committing a crime.

“Unfortunately, this is the fate of many African Canadian men, who are suspected of criminal wrongdoing but are never criminally charged,” said the ACLC.

The legal clinic said it is disappointed that state actors, with the ability to use deadly force, will continue to be protected by the government and police services at the expense of the Black community, people with mental health issues and other vulnerable groups. 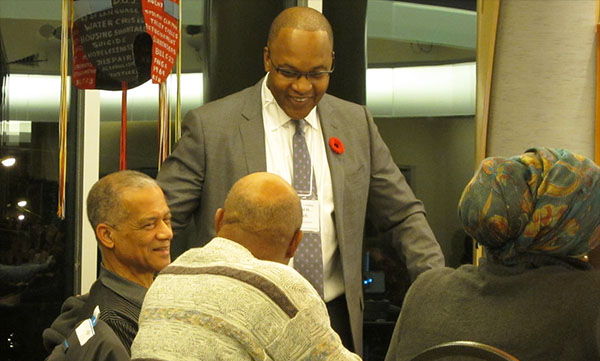 Some members of the audience at the public consultation meeting in Ottawa, Ontario, share their opinions with Justice Tulloch, who listens attentively. Photo contributed.

In his remarks at the public release of the report on April 6, Justice Tulloch said he believed that the recommendations he has made will make the oversight bodies more effective, efficient, transparent and accountable.

“The people of Ontario are entitled, and deserve, to know that when it comes to the operation of police services in the province, justice is not only done, but it is seen to be done. I believe the recommendations made in this report will go a long way toward achieving that objective,” he said.

The judge has organized presentations of his report to community and policing stakeholders in five cities in the province.

On April 11, he did so at Ryerson University; was in Ottawa at the Ottawa Conference & Event Centre on April 12 and in Windsor on April 18; and will be in Thunder Bay on April 20, and Hamilton on April 24.