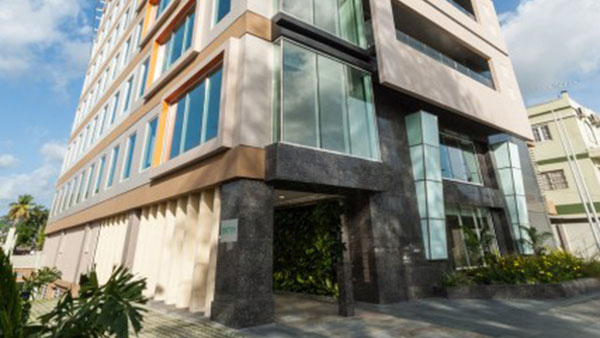 This commercial building, known as Savannah East, is located close to Trinidad and Tobago's historical Queen's Park Savannah. Owned by RGM Limited, it was hailed in the Trinidadian media, last month, as the first LEED-certified building in the country. Photo credit: RGM Limited.

PORT OF SPAIN, Trinidad and Tobago, April 20, 2017 (IPS) — Caribbean Community (Caricom) states are in the process of formulating an energy efficiency building code for the region that would help reduce CO2 emissions, but implementation of the code may depend heavily on moral suasion for its success.

Fulgence St. Prix, technical officer for standards at Caricom Regional Organisation for Standards and Quality (CROSQ) who is overseeing the Regional Energy Efficiency Building Code (REEBC), told IPS, “When we at the regional level propose a standard or code it’s meant to be voluntary…We do not have the mechanism to dictate to member states to make any standard the subject of a technical regulation thus making implementation mandatory.”

In keeping with WTO guidelines, he said, “A standard is a voluntary document. You cannot force any member state to implement any one standard.” The decision as to whether to implement the REEBC, therefore, rests with member states.

The REEBC project was officially launched at a meeting in Jamaica at the end of March. This followed consultations over several months by a Regional Project Team comprising representatives from some of the Caricom member states, as well as regional architects, engineers, builders and electricians, on the need for a minimum energy efficiency building standard for the region.

It was unanimously agreed that it was imperative one be established and the decision was taken to base the REEBC on the 2018 version of the International Energy Conservation Code that will be published in July of this year.

“The goal is to have a document that would reduce the CO2 footprint on the average,” said St. Prix, adding that climate change is just one of the considerations driving the REEBC initiative. “If we could develop that code and have it effectively implemented, we could realise at least a 25 per cent reduction of CO2 emissions, but this is just an estimate.”

The Intergovernmental Panel on Climate Change (IPCC) chapter on Buildings in its Fifth Assessment Report states that in 2010 buildings accounted for 32 per cent of total global final energy use, 19 per cent of energy-related greenhouse gas (GHG) emissions (including electricity-related), and approximately one-third of black carbon emissions.

GHG emissions in Latin America and the Caribbean from buildings were said to have grown to 0.28GtCO2eq/yr (280,000,000 tonnes of CO2 equivalents of GHG emissions) in 2010.

The report also states, “final energy use may stay constant or even decline by mid-century, as compared to today’s levels, if today’s cost-effective best practices and technologies are broadly diffused.”

“The architects are quite knowledgeable in terms of sustainable design. What we do not have are clients who are willing to do the financial outlay to incorporate sustainability.” –Jo-Ann Murrell of Carisoul

However, the IPCC’s report suggests that moral suasion may not be the most effective means of achieving the implementation of energy efficiency standards. It notes, “Building codes and appliance standards with strong energy efficiency requirements that are well enforced, tightened over time, and made appropriate to local climate and other conditions have been among the most environmentally and cost-effective.”

Trinidadian architect, Jo-Ann Murrell, managing director of Carisoul, a firm that specialises in green architecture, said effective implementation of a regional energy efficiency building code may have to wait until the region’s younger generation become the decision makers with regard to home purchases.

She said that the subsidised cost of electricity in Trinidad and Tobago is 3 cents US per kWh. So, “there is not a desire on the part of clients, due to the cost factor, for using alternative sources of energy or using energy saving devices. So when we tell clients they can achieve energy savings if they use certain building methods, they will choose the energy efficient air conditioning unit, they will use LEED lights, and so on, but [not always] when it comes to other options,” Murrell said.

She stressed, “We have very competent architects in Trinidad and Tobago and the architects are quite knowledgeable in terms of sustainable design. What we do not have are clients who are willing to do the financial outlay to incorporate sustainability.”

St. Prix also cited economic challenges for Caricom states wishing to implement the REEBC. “You know that member states are at very different stages of their development. Any building code is a challenge. The major challenge is human resources and [the need for] economic resources to be able to employ the needed personnel to implement the code.”

The IPCC report also cites transaction costs, inadequate access to financing, and subsidised energy as among the barriers to effective uptake of energy efficient technologies in building globally.

The IPCC report goes on to state, “Traditional large appliances, such as refrigerators and washing machines, are still responsible for most household electricity consumption…albeit with a falling share related to the equipment for information technology and communications (including home entertainment) accounting in most countries for 20 % or more of residential electricity consumption.”

For this reason, CROSQ is also undertaking a regional energy labelling scheme for appliances sold in the region. Though common in European countries, they are not standard practice throughout the Caribbean. The scheme, said Janice Hilaire, project coordinator for the Renewable Energy and Energy Efficiency Project (R3E), is being funded by the German government.

“We also want to develop standards for PVC panels and water heaters,” she added.

Hilaire said the R3E would be training people to carry out the testing for this scheme at select labs in the region that has a limited amount of equipment for carrying out the tests.

“We are setting up an intense information and awareness campaign because we want to bring about a change in behaviour. We want householders to understand why they must adopt certain practices. We also want to bring about a more efficient use of energy.in the region which will positively affect GDP. The REEBC cannot operate in a vacuum. It must be complemented by other initiatives,” she said.

The REEBC and the associated R3E are in their early stages, St. Prix pointed out. As these projects are rolled out, CROSQ will begin collecting data that shows the actual dollar savings the region enjoys through these initiatives. The CROSQ team will then be able “to go to our policy makers and say, if you make this mandatory you will be saving this amount.” Member states would be urged to put legal mechanisms in place, St. Prix said.