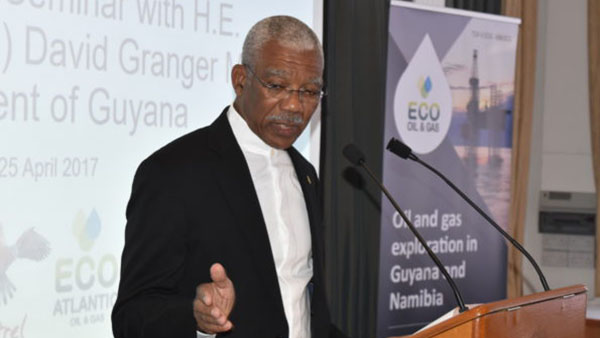 LONDON, England April 26, 2017 (CMC) – President David Granger told European investors, today, that Guyana has the most exciting investment prospects in the Caribbean, and that the country holds an enviable and strategic position as the link between the South American continent, the Caribbean region and the rest of the world.

“We have the land, we have an intelligent English-speaking population, we have the resources, and I think people who are looking for something different, something unique, will come to Guyana. I am not suggesting that you leave Belize or Antigua or Barbados,” President Granger told an investment seminar, organised by the Caribbean Council in London. 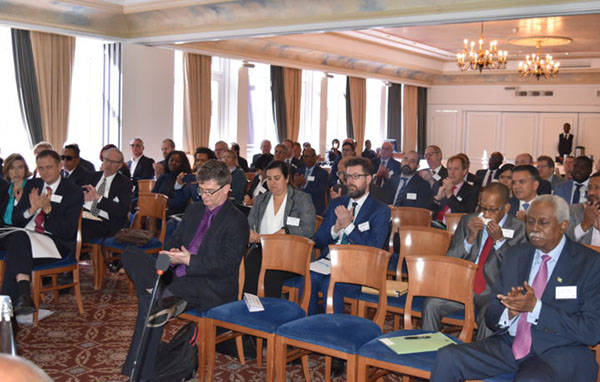 In the audience at the Investment Seminar on Guyana were business executives from infrastructure, port development, oil and gas, tourism and hospitality and shipping sectors, as well as some members of the diplomatic community. Photo credit: GINA.

“But I am suggesting, for long-term development, Guyana is the best prospect for investment,” he said, as he painted a picture of Guyana’s potential and the ‘green’ State development policy, which would see it taking advantage of its eco-tourism product, preserving its environment, pursuing ‘green’ energy development, while taking advantage of coming oil and gas revenues to accomplish these goals.

“Oil and gas is a very attractive prospect… We probably wouldn’t start to produce oil and gas till maybe 2020.

“We will continue to develop our sources of renewable energy and, at the same time, use the revenues from the petroleum industry to funnel our development of infrastructure and education in particular, and ensure that other industries could be diversified away from what we call, our six sisters — sugar, rice, bauxite, timber and gold and diamonds. 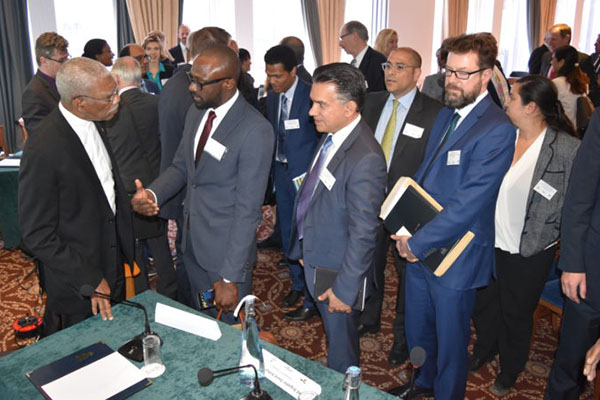 “Oil and gas is not going to distract us. We are going to ensure that the revenues… go into our Sovereign Wealth Fund, but we will also ensure that we continue to become a ‘green’ state by developing our sustainable energy resources,” President Granger added.

Granger was supported in his views by Gil Holzman, the President and chief executive officer of ECO Atlantic Oil and Gas, which has a stake in oil and gas exploration in Guyana.

“With everything combined together under the management of the President and his administration, I think the next two to five to 10 years will be very transformational and again, from my personal perspective, this is probably the best investment destination in the world at the moment,” Holzman said.

Granger and Holzman were part of a panel, which included Minister of Foreign Affairs, Carl Greenidge, British High Commissioner to Guyana, Greg Quinn, and Andy Thorne, Group Chairman of the Kestrel Group, which is involved in the shipping industry in Guyana. 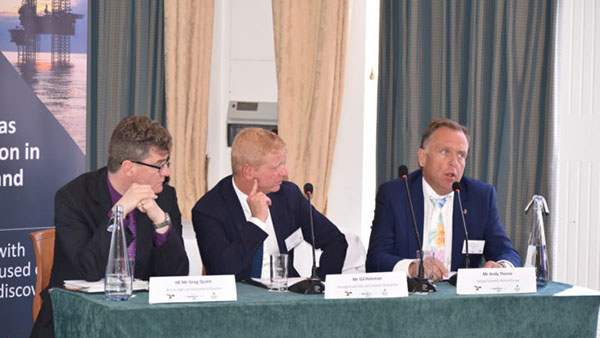 The session was facilitated by British Member of Parliament, Lord Bruce of Bennachie.

Granger noted that with the need for cheaper energy to boost the manufacturing sector, there was need for investments in solar and wind energy, biomass and hydropower.

“We can generate electricity from about 100 sites… We have huge savannahs and the sunlight is sufficient to generate electricity in many of our hinterland communities… We are the largest CARICOM [Caribbean Community] sugar producer, up to the present time and, although there have been uncertainties in the market in the European Union, we still have a viable sugar industry, which can generate enough biomass to produce energy,” he said.

President Granger told the conference that progress is already being made, with regard to the legal and regulatory environment.

He said this, combined with the fact that Guyana — the only English speaking country on the continent of South America — has a similar common law, parliamentary system and institutional infrastructure that can be found in other Commonwealth countries, means that there would be some ease of doing business for companies from those parts of the world. 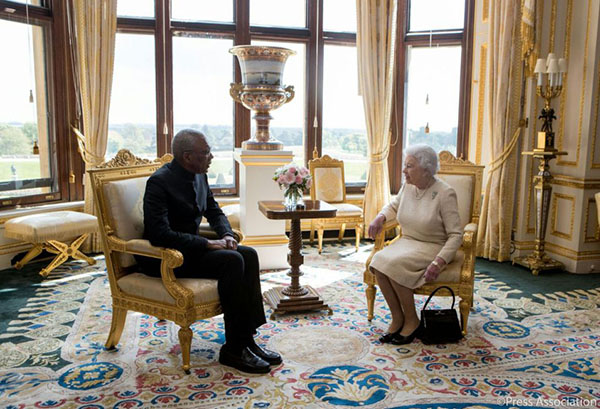 President David Granger, earlier in the day, had an audience with Her Majesty Queen Elizabeth II, at Windsor Castle during his first official visit to the United Kingdom. Photo credit: GINA.

“We can assure that your profits can be repatriated. We can assure you that our legal system, our judiciary, our ombudsman, our auditor general, our elections, are all entirely in consonance with what is required in Western Europe and the Commonwealth.

“Only last year, we had our Local Government Elections which, under the previous administration, had been suspended for nearly two decades, and when the elections were held, we created three new towns. The urbanisation of our hinterland is proceeding apace,” he said.