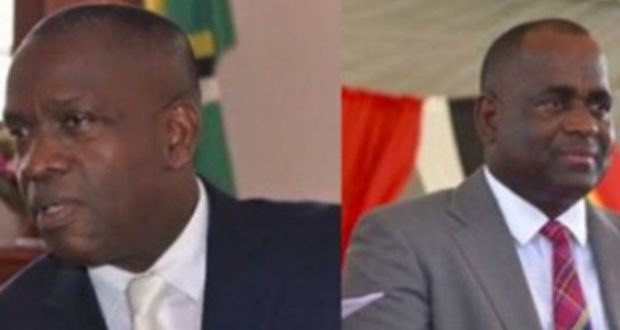 ROSEAU, Dominica, May 1, 2017 (CMC) – A High Court judge has said that Opposition Leader, Lennox Linton, “not only reported or repeated” allegations made against Dominica government ministers, but “he adopted and embellished what was alleged”.

The lawsuit stems from an incident in 2014, in which Linton, during a speech at a youth rally in May of that year, alleged that government ministers “rape young people in exchange for public assistance, at the expense of the state”.

Linton has since said he would appeal the ruling saying, “I do not believe it is just for the judge to decide the case without hearing evidence from the claimants who brought the action, from the defendants who have been…cited for defamatory words.

“The statements I made were made in the context of certain factual truths …that were reported and outlined in my defence. The judge has chosen to ignore them, let us hear if a higher court would have a similar view and rule similarly.”

“But this one does not end here, it is going to have to go further,” he added.

In her written ruling, released here over the weekend, the judge outlined the reasons for dismissing Linton’s defence and ordering that an assessment of damages be conducted.

“There was no allegation that the ministers of government had raped anybody. Also the young lady, who the defendant referred to as the virtual complaint, expressed a desire not to proceed with her allegations which, in the circumstances of the case, means the allegation remained what it was, an allegation, not a proven fact”.

The judge noted also that “the thrust of the first named defendant’s statement was that the ministers were rapists and harbourers of rapists.

“I find that the defendant’s statements were allegations of facts and not an opinion and, in the circumstances of the case at bar, the defendant’s defence of qualified privilege has no prospect of succeeding, and the defendant, in this regard, is therefore struck out”.

Justice Stephenson said she found that the words uttered and published, conveyed to the fair-minded listener, that there are rapist ministers in the Dominica government and that the ministers have been harbouring and protecting rapist ministers, including themselves.

She ruled that to “my mind the statement made by the first respondent went beyond what was reported to the police.

“He went on to make independent allegations and inferences by calling all the ministers of government “rapist ministers” and referring to the government as one which harboured rapist ministers, and upheld extortion of sexual services from young people seeking the facilitation of government services, and in all the circumstances of this case, I am of the view that the defence of Qualified Privilege would not succeed”.

Prior to the lawsuit being filed, Skerrit and members of the Cabinet issued letters to Linton, in which he was given 48 hours to apologize and pay one million EC dollars in compensation.

Last Thursday night, as he addressed a town hall meeting, Prime Minister Skerrit made reference to the ruling, saying, jokingly, he expects to get at least EC$55,000 as a result .

“I want the EC$55,000 because we gave the man an opportunity to apologise. What is wrong in saying I am sorry. In the heat of things I said somethings (and) when I go home, I reflected on that and said, I should not have said that, so forth.

“I mean, what is wrong with saying you are sorry. Now you are putting your family in a serious state of financial bankruptcy and this is not what we want our children to emulate. Sometimes we beat our children if they refuse to say sorry. Just to say sorry, now you owing all of this money that you could save for your children’s education at university, and so forth,” Skerrit told the meeting.