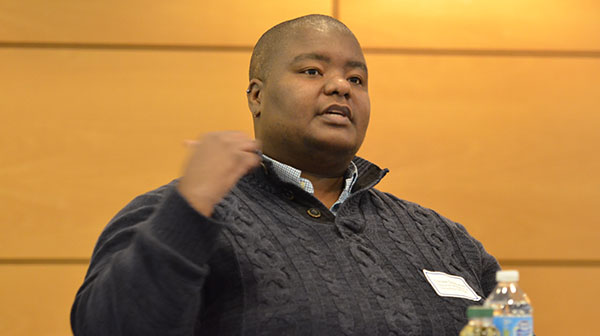 Sojourner, who is of Jamaican heritage and the founder of Prevent CRP in Toronto, is doing her second masters, this time in law focusing on this issue at Osgoode Hall Law School.

On Thursday, May 11, she will be making a presentation entitled “Shopping at the Intersections: Gender and Consumer Racial Profiling” at the Charles Hamilton Houston Institute for Race and Justice at Harvard Law School.

One of her areas of focus is what happens when someone confronts a business to say they feel that their rights are not being respected as a consumer. She is also interested in the legal framing of these issues.

In 2013, it released what was then the first report in Canada “to address the issue of the experiences of customers and how they are treated by staff in retail and service establishments in Nova Scotia.”

“More often than other ethnic groups in Nova Scotia, Aboriginal people and African Nova Scotians say they are treated poorly when they shop for goods and services,” the report said.

Sojourner’s interest in this started over 15 years ago when she worked as a security guard and had some personal experiences as a racialized young black woman.

She was told, informally, by a security supervisor that she needed to follow black youth.

The graduate law student thought it was really fascinating that particular communities and groups to which she belonged were being tagged for surveillance.

She said if a complaint was brought forward, her experience and what she heard from other people, is that they were not treated as though they deserved to be heard, listened to, and believed.

In her legal research, she is trying to understand the human rights law through the Human Rights Code to ascertain if it is efficient in dealing with these matters.

She is interested in the outcome of peoples’ experiences when they have been profiled.

Asked how consumers would know that they are being racially profiled, Sojourner said people usually talk about a few things.

“They talk about having a person come up to them and say, initially, ‘Hi, how are you?’ For some people that’s fine,” but “after three or four greetings by four or five different people, perhaps then you begin to think that something’s up — either they’re great at their customer service, they really want to help you, or are you being watched.”

Two businesses – Shoppers Drug Mart (in Toronto) and Sobeys (in Tantallon, Nova Scotia) – have been in the news for their practices resulting in black consumers filing complaints against them.

A staff member of Sobeys accused Andrella David of shoplifting, and the human rights tribunal in Nova Scotia, where she filed a complaint in 2009, ruled in 2015 that David, who is black, was the victim of racial profiling.

The Code prohibits infringement of that right and if is it infringed anyone can file a human rights complaint with the Human Rights Tribunal of Ontario.

“They have lawyers available, they will take in their facts, give them the information and then work with them to make a determination as to their next step.”

Sojourner founded Prevent CRP when she got accepted to do her masters at Osgoode Hall Law School.

The case of McCarthy v. Kenny Tan Pharmacy Inc. — where in 2011, Mary McCarthy, a black woman from Fredericton, New Brunswick, who was in Toronto studying to do her PhD, was racially profiled by a store employee at a Shoppers Drug Mart in the city — is one of the cases that Sojourner is examining for her thesis.

In 2015, the Ontario Human Rights Tribunal ruled that McCarthy was targeted as a shoplifter because she is black. It ordered Shoppers Drug Mart to pay her $8,000.

“What was interesting about that particular case is that the loss prevention policy in the employee handbook that was presented as evidence in that particular case, it says do not approach somebody based on race or any other criteria, you have to have a ground and reasonable suspicion,” says Sojourner.

She said what became an issue was the individual employee making a determination, based on informal policy, that if they found someone suspicious they would directly approach the individual before they left the store. A theft doesn’t occur until after the person leaves the premises.