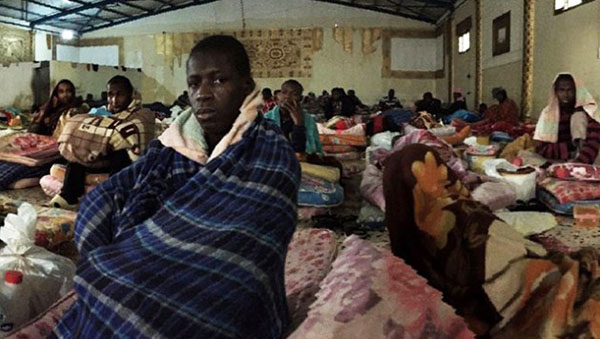 A shot of the living conditions inside a detention centre in Libya. Photo credit: UN Migration Agency (IOM).

ROME, Italy May 10, 2017 (IPS) — Hundreds of migrants along North African migration routes are being bought and sold openly in modern day ‘slave markets’ in Libya, survivors have told the United Nations migration agency, which warned that these reports “can be added to a long list of outrages” in the country. The International Criminal Court is now considering investigating.

The International Organization for Migration (IOM) had already sounded the alarm after its staff in Niger and Libya documented over the past weekend shocking testimonies of trafficking victims from several African nations, including Nigeria, Ghana and the Gambia. They described ‘slave markets’ tormenting hundreds of young African men bound for Libya.

Operations Officers with IOM’s office in Niger reported on the rescue of a Senegalese migrant who this week was returning to his home after being held captive for months, IOM had on April 11 reported.

According to the young man’s testimony, the UN agency added, while trying to travel north through the Sahara, he arrived in Agadez, Niger, where he was told he would have to pay about 320 dollars to continue North, towards Libya.

A trafficker provided him with accommodation until the day of his departure, which was to be by pick-up truck, IOM said. But when his pick-up reached Sabha in south-western Libya, the driver insisted that he hadn’t been paid by the trafficker, and that he was transporting the migrants to a parking area where the young man witnessed a slave market taking place.

“Sub-Saharan migrants were being sold and bought by Libyans, with the support of Ghanaians and Nigerians who work for them,” IOM Niger staff reported. 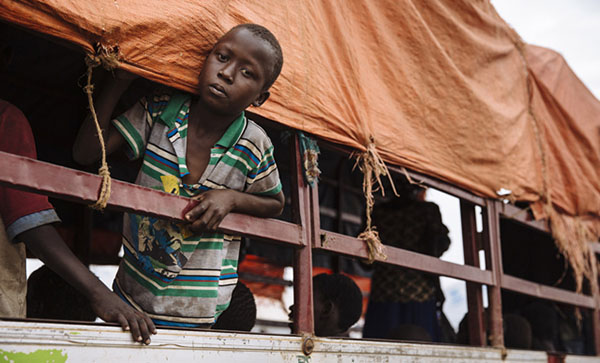 A young South Sudanese refugee looks out of a truck before being transported to the Imvepi settlement at the Imvepi Reception Centre, Arua District, in northern Uganda. Photo credit: UNHCR/David Azia.

A ‘Long List of Outrages’
“The latest reports of ‘slave markets’ for migrants can be added to a long list of outrages [in Libya],” said Mohammed Abdiker, IOM’s head of operation and emergencies. “The situation is dire. The more IOM engages inside Libya, the more we learn that it is a vale of tears for all too many migrants.”

Abdiker added that in recent months IOM staff in Libya had gained access to several detention centres, where they are trying to improve conditions.

“What we know is that migrants who fall into the hands of smugglers face systematic malnutrition, sexual abuse and even murder. Last year we learned 14 migrants died in a single month in one of those locations, just from disease and malnutrition. We are hearing about mass graves in the desert.”

So far this year, he said, the Libyan Coast Guard and others have found 171 bodies washed up on Mediterranean shores, from migrant voyages that foundered off shore. The Coast Guard has also rescued thousands more, he added.

Sold in Squares or Garages
“Migrants who go to Libya while trying to get to Europe have no idea of the torture archipelago that awaits them just over the border,” said Leonard Doyle, chief IOM spokesperson in Geneva. “There they become commodities to be bought, sold and discarded when they have no more value.”

Many describe being sold “in squares or garages” by locals in the South-Western Libyan town of Sabha, or by the drivers who trafficked them across the Sahara desert.

“To get the message out across Africa about the dangers, we are recording the testimonies of migrants who have suffered and are spreading them across social media and on local FM radio. Tragically, the most credible messengers are migrants returning home with IOM help. Too often they are broken, brutalised and have been abused, often sexually. Their voices carry more weight than anyone else’s,” added Doyle. 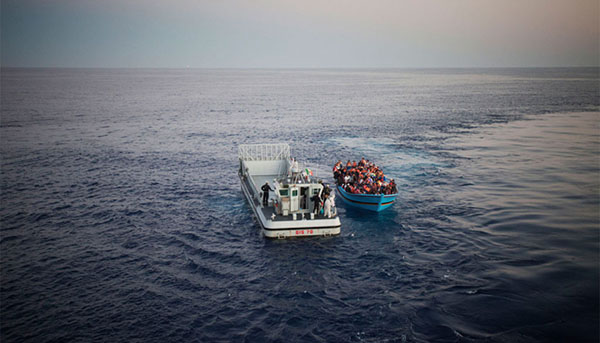 Risking their lives to reach Europe from North Africa, a boatload of people, some of them likely in need of international protection, are rescued in the Mediterranean Sea by the Italian Navy. Photo credit: UNHCR/A. D’Amato.

So far, the number of Mediterranean migrant arrivals this year approaches 50,000, with 1,309 deaths, according to the UN migration agency.

IOM rose from the ashes of World War Two 65 years ago. In the battle-scarred continent of Europe, no government alone could help survivors who wanted no more than an opportunity to resume their lives in freedom and with dignity. The first incarnation of IOM was created to resettle refugees during this post-war period.

“My office continues to collect and analyse information relating to serious and widespread crimes allegedly committed against migrants attempting to transit through Libya,” said Fatou Bensouda during a Security Council meeting on the North African country’s situation.

“I’m similarly dismayed by credible accounts that Libya has become a marketplace for the trafficking of human beings,” she added, noting that her office “is carefully examining the feasibility” of opening an investigation into migrant-related crimes in Libya should the Court’s jurisdictional requirements be met.

‘Horrendous Abuses’ at the Hands of Smugglers
Meanwhile, one person out of every 35 trying to cross the inland sea between northern Africa and Italy in 2017 has died out in the deep waters of the Mediterranean, the United Nations refugee agency on May 8 reported, calling for “credible alternatives to these dangerous crossings for people in need of international protection.”

“Saving lives must be the top priority for all and, in light of the recent increase in arrivals, I urge further efforts to rescue people along this dangerous route,” said  the  UN High Commissioner for Refugees (UNHCR), Filippo Grandi.

The Central Mediterranean – with smugglers trafficking people from the shores of Libya to Italy – has proven to be particularly deadly. Out on the open sea, approximately 1,150 people have either disappeared or lost their lives in 2017.

In response to the recent stories reported to UNHCR’s teams by survivors, Grandi said that he is “profoundly shocked by the violence used by some smugglers.”

As the “Central Mediterranean route continues to be particularly dangerous this year, also for 2016 the UN recorded more deaths at sea than ever before.

The main causes of shipwrecks, according to UNHCR, are the increasing numbers of passengers on board vessels used by traffickers, the worsening quality of vessels and the increasing use of rubber boats instead of wooden ones.