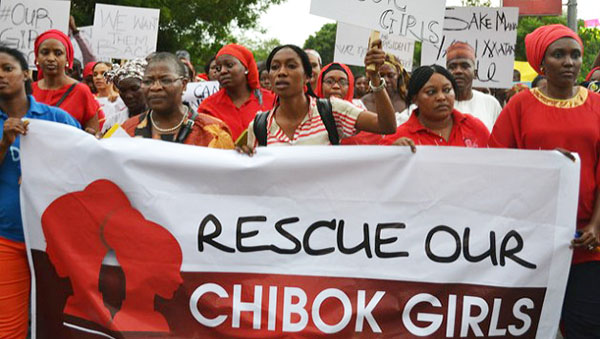 Gathering at the country's capital of Abuja, Nigerians call on the government to act quickly to find the 276 girls kidnapped from a Chibok school. Photo credit: IPS.

UNITED NATIONS, New York May 10, 2017 (IPS) — Following the release of over 80 missing schoolgirls, human rights groups have expressed concerns about their rights and future.

After a series of negotiations, the government of Nigeria recently struck a deal, allowing for the release of 82 girls from Chibok in Nigeria’s Borno state, in exchange for five Boko Haram leaders.

Though a positive development, the news was met with cautious optimism by international groups.

“The release of 82 of the kidnapped Chibok schoolgirls by the armed group Boko Haram is a big relief. However, it is vital now that they receive adequate physical and psychosocial counselling and support so that they can fully reintegrate in their communities,” said Amnesty International’s Nigeria Director, Osai Ojigho.

In April 2014, 276 girls were abducted from their school in Chibok by Boko Haram, sparking international outrage and the #BringBackOurGirls social media campaign.

Soon after the newest release, the West African nation’s government publicised the girls’ names to outlets including Twitter.

“We can’t imagine the kinds of abuses they might have been exposed to. We were hoping the focus would be on their reintegration and their return to their families or to any kind of normalcy… but releasing their names in the way that the government has done, I think they paid very little attention to the rights and the needs of the girls,” Segun told IPS.

While such information was divulged to the media, she added that the girls’ families were left in the dark, as they did not have access to any information or list of names. “I think that it’s shameful,” she continued.

Segun also expressed concern over the legal status of the girls.

In a similar deal between the Nigerian government and Boko Haram, 21 girls were released in October 2016. However, the girls have still not been allowed to return to their families and communities.

Though the government has claimed that it is providing education and services to the girls, “a jail is a jail,” Segun told IPS.

“They have no freedom to leave. They have a right to their liberty, and there is a legal obligation on the government to give reasons for holding them.… We are concerned that the same treatment awaits the recently released 82 girls as well,” she continued.

Ojigho expressed similar sentiments, urging the government to ensure the privacy of the released girls and that they are not kept in lengthy detention and security screening, which may “add to their suffering and plight.”

Segun highlighted the need for families to have access to information and their own children. But it is not just these girls that deserve such access and attention, she said.

“Virtually everyone who has been affected by the conflict has a son, a daughter, a father, a mother missing, whose fate they have no information about,” Segun told IPS.

Though it is uncertain how many have been kidnapped, Amnesty International has documented at least 41 cases of mass abductions by Boko Haram, since the beginning of 2014. Many abductees are subjected to abuses including rape, beatings, and forced suicide missions.

In a recent report by the UN Secretary General on Children and Armed Conflict in Nigeria, the UN verified the use of 90 children, mostly girls, for suicide bombings in Nigeria, Cameroon, Chad, and Niger. They were also able to verify cases of sexual violence affecting 217 children, between 2013 and 2016, but estimate that thousands of women and girls may be victims.

“Boko Haram has inflicted unspeakable horror upon the children of Nigeria’s north-east and neighbouring countries,“ said Special Representative of the Secretary-General for Children and Armed Conflict, Virginia Gamba.

Human Rights Watch also found insufficient government action towards solving such cases. In November 2014, over 500 children were abducted from the Borno town of Damasak.

The human rights group found that residents have received no response from the government and that Nigerian authorities have neither publicly acknowledged the Damasak abductions nor disclosed efforts to recover the missing children.

“The government has failed to reach out to them, perhaps because they do not have high level media attention as the Chibok abduction has,” Segun said, stressing the need to widen the scope of negotiations to include the thousands missing beyond Chibok’s schoolgirls.

The UN announced that they are on standby to provide comprehensive support to the survivors, including emergency reproductive health care and psychosocial counseling.

The UN’s Children Agency (UNICEF) also vowed to help the girls reunite with their families and continue their education in a safe environment.