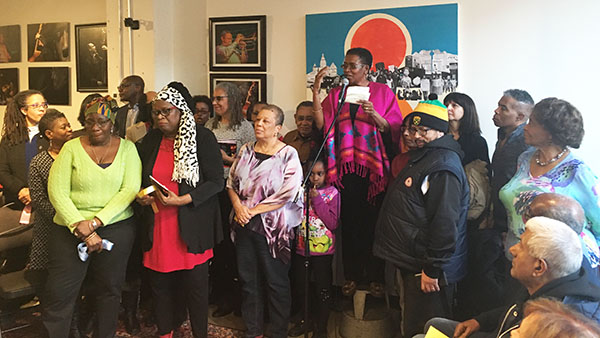 Itah Sadu (elevated and speaking at microphone), who recently traded in her signature dreadlocks for a short-cropped hairstyle, addresses the audience at the launch, last month, of her bookstore's new, larger location. Miguel San Vicente, Sadu's husband and together with whom she owns A Different Booklist, stands to her right in the photo. Photo by Neil Armstrong.

TORONTO, Ontario May 10, 2017 (PRIDE) — A Different Booklist Cultural Centre: The People’s Residence has major plans for its new home in the former Mirvish Village site being developed by Westbank Corp., the company that bought the iconic property.

It expects to move its new space, at the corner of Markham and Bloor Street, in a little over five years from now.

On April 7, the cultural hub launched a $2M fundraising campaign at the official ribbon cutting ceremony and open house of its new temporary location, 777-779 Bathurst Street in Toronto.

A Different Booklist Cultural Centre is aiming to raise the $2million, in two years, to enable it to fulfill its mission of being a hub “where patrons re-design and shape the arts and provide intellectual legacy”.

“It serves to enable, house and support the creation, preservation and exhibition of the African and Caribbean Canadian artistic and historical expression. It is a space that leverages technological innovations to foster and attract intergenerational activity that presents our stories, histories and lived experiences to the community. It is a residence that boasts Welcome to Blackhurst St., A Different Booklist and The Performance Space for African and Caribbean Canadian Expression,” notes the promotional material in the venue.

“On Tuesday [April 4], we passed the new zoning bylaw for the property that is now known as Mirvish Village and it included a future space, in perpetuity we hope, but a future space for this organization on the future site across the street,” said Layton, noting that it is a “bigger space, because we know this organization is only going to grow”.

“We are a changing community, our city has always been changing and as that change happens, we need to make sure that we look at the past and we look at who brought us here. And one of the things that Councillor Cressy and I heard through all of the community consultations around Bathurst Street that have been happening for the last couple of years, was just how important this section of Bathurst was to the Black community of this city.” 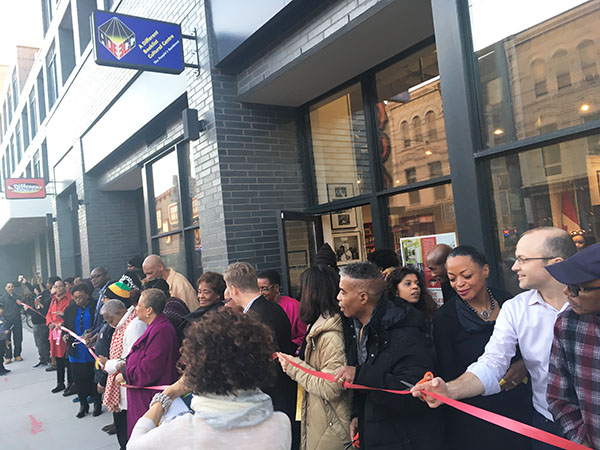 Layton said various organizations expressed wanting space in the new development, but “no one was more relentless in that pursuit” than Itah Sadu and Miguel San Vicente, owners of A Different Booklist.

The organization is encouraging 150 people to take out $100 memberships for the year and be among the first members of the cultural centre.

“That is the history of Bathurst and Bloor in downtown Toronto; here has always been a place for all. And there is a risk, and it’s a risk we’re really concerned about, as the development comes here, what happens to our space for black folk – not just to reflect on the past, not just to record the past, but to ensure a vibrant place to continue a living legacy for the future.”

Cressy continued: “We have serious challenges in our city right now; we have real anti-Black racism happening in our city right now. And if you don’t have a space, not just for art and culture, but activism, then we won’t get the change. This space will make our city a better place.” 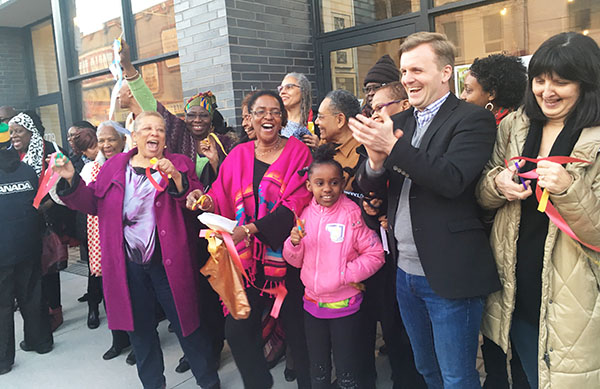 Sadu said the celebration was “a collective mighty moment of all of the people,” noting that the day was for all.

Rita Davies, chair of the Ontario Arts Council, said she was thrilled with the space and the name, noting that, “A Different Booklist has created that kind of cultural hub, a cultural space, a physical space, but also a psychic space where they have invited a diversity of voices, and books, and events and projects and supported them.”

She reiterated what Sadu said in her opening remarks, that it is “the mighty collective” because no one does anything by themselves.

Davies noted that no one does anything without strong leadership either, so she wanted to recognize the work of Itah and Miguel, who were themselves recognized, last October, by Premier Kathleen Wynne.

“They’ve received for A Different Booklist for the work that they’ve done in fostering all of this incredible creative energy, they received the Premier’s Award for Excellence in the Arts.”

The cultural centre is now operating across from where it once stood, thanks to Westbank Corp.

On February 4, many community members helped to move the bookstore and cultural centre from its 20-plus year old location, 746 Bathurst St., to just across the road.

During the ribbon cutting ceremony, community leader, Nene Kwasi Kafele, led the invocation of the names of ancestors who had “struggled, defended, advocated, pushed, stood up for our rights, fought for our liberation, for social justice, for change, for equality – we have a long rich tradition of struggle and resistance and achievement and overcoming,” he said.

“Tradition demands and requires that when we gather, we ground our gathering in the acknowledgement and in gratitude of those who came before us, who cleared the way, who made a path and whose shoulders we stand on, sturdily and strongly,” said Kafele, before asking for a moment of silence “for our warriors, our freedom fighters, those who struggled for our liberation and sacrificed through love and hard work, and sweat and blood and tears, and many times their own lives”.

Kafele noted that, “when we stop calling the names of our ancestors, they cease to exist”, so he asked the gathering to call out some names of “those who led lives that were exemplary lives of sacrifice and love and leadership and who have passed on to the next realm but whose spirits, whose memories, whose contributions live on in us, around us and with us. Call their names so that they’ll be present in this space and they’ll remain alive in our consciousness and our memory.”

People did so with names such as: Charles Roach, Sherona Hall, Dudley Laws, Louise ‘Miss Lou’ Bennett-Coverley, Rosemary Brown, and many others.

Stanley Julien, treasurer of the board, said, earlier in the week, he had lunch with a friend, who is Jewish, and they spoke about what makes a community successful.

They agreed on three things: culture, education and legacy.

He said all of these things are covered within A Different Booklist Cultural Centre and the last one, legacy, is the reason he wants people to contribute to the cultural centre.

Julien said he is an example of legacy of culture. As a child growing up in Montreal, from ages 10 to 17, he attended almost every Saturday what was called the Negro Community Centre.

“Now here’s a kid from Trinidad, 7 years old, who came to Montreal and then every Saturday would attend the Black Community Centre,” he said, noting that years later, he became a managing director at the Bank of Montreal.

Julien said a few weeks ago they gathered at the home of Zanana Akande, “a great legacy that we have in the community,” and while there with some other patrons, including Denham Jolly, they provided the seed funds of almost $400, 000 for the fundraising campaign.

“That’s through the patrons and the legacy of our community. Now it’s up to us to carry that on and we can reach out,” he said.

He encouraged everyone from the community, in attendance, to contribute by becoming a member of the cultural centre.

Julien said the bottom line is for them to trust in Miguel and Itah, the board, the cultural centre, and the program that it will continue for years to come.

Sadu thanked Westbank for including A Different Booklist in almost “every step of the way.”

Judy Brooks, chair of the board, noted that the space is a welcoming hub, “that’s what we want to instill in everyone, this is a welcoming home”. She also encouraged everyone to sign up for membership.

Another board member, Michael Lashley, welcomed everyone in Spanish and French, after which Sadu emphasized that ‘The People’s Residence’ will also represent the people of the French-, Spanish- and Dutch-speaking countries of the Caribbean and will be a space of diversity and progressive literature in politics.

Sadu, Akande and Dr. Lorimer led a collective reading of two poems of the late Charles ‘Mende’ Roach from his book of poetry, “Rhapso Prosodies.”

The poems, “Here We Stand” and “We Can Change The World”, urges everyone to work together to achieve common goals.

The formalities wrapped up with everyone singing the Black national anthem, “Lift Every Voice and Sing”, followed by DJ Power spinning a medley of funk, soca, reggae and more.