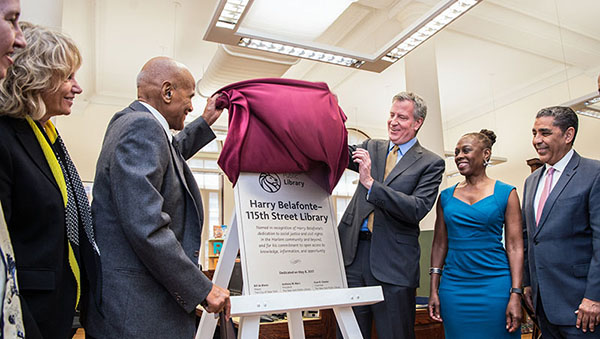 Belafonte,90, whose mother was born in Jamaica and father in the French-speaking Caribbean island of Martinique, participated in the plaque unveiling ceremony at the library.

“It is an honor to rename the 115th Street Library for Harry Belafonte, who is not just a legendary artist and musician, but one of the preeminent voices of conscience of the last half century,” said Mayor of New York Bill de Blasio.

“I have personally drawn inspiration from Mr. Belafonte’s unbroken commitment to making the world a better place, which he has carried with him since childhood.

“As a native New Yorker of Caribbean descent, he is also a living testament to how immigrants like his parents help make this the greatest city in the world.

“Now, this library will serve as a living reminder of Mr. Belafonte’s music, values and activism for generations to come,” he added.

First Lady Chirlane McCray said The Harry Belafonte-115th Street Library will be “an enduring testament to a great son of Harlem and the Caribbean”.

“Harry Belafonte has modeled an exemplary standard of service for today’s artists,” said McCray, who is of Barbadian and St. Lucian roots.

“The ‘King of Calypso’ captured audiences with his soothing melodies, but never shied away from the more daunting task of fighting injustice, whether at home during the Civil Rights Movement, or abroad in South Africa tackling apartheid.

“It is his profound belief in human rights that transcends borders and time, and that makes Harry Belafonte, forever the Renaissance man,” she added.

President of the New York Public Library (NYPL) Tony Marx, said Belafonte has “dedicated his life to standing up and fighting for his fellow man, and we are proud that this legacy and spirit will inspire all those who enter the newly-named Harry Belafonte-115th Street library in Harlem”.

“We thank Mayor de Blasio for partnering with us on this initiative to celebrate a champion of civil rights, who believes – as we do – in opportunities for all,” he added.

Belafonte said he was “deeply honored the City of New York has chosen to commemorate me by naming a public library in my name”.

“I have had a love affair with NYC since the day I was born,” he said. “My mother and father could have made no better choice when coming to this city.”

“I am deeply thankful to Mayor De Blasio and New York Public Library President, Tony Marx, for bestowing this honor upon me,” he added. “The library system of New York has been an integral part of my life. It has offered me a life of opportunity I, perhaps, would have never known. I love New York and I love the people of this great city.”

The Library chose to name the branch to reflect the values and passions of the community in which it is located and to honor Belafonte, who grew up in Harlem and has since been a vital part of the Harlem and larger community, the Office of the Mayor said in a statement.

Belafonte has spent his life exposing Americans to world music and challenging and overturning racial barriers across the globe. He recently founded the Sankofa Justice & Equity Fund, a non-profit social justice organization that utilizes the power of culture and celebrity in partnership with activism.

“Harry Belafonte is a Harlem treasure and today’s renaming of the 115th Street library in his honor – to honor his life, legacy and contributions to the global community – is a fitting tribute to such a remarkable and talented individual,” said US congressman, Adriano Espaillat, who represents Harlem.