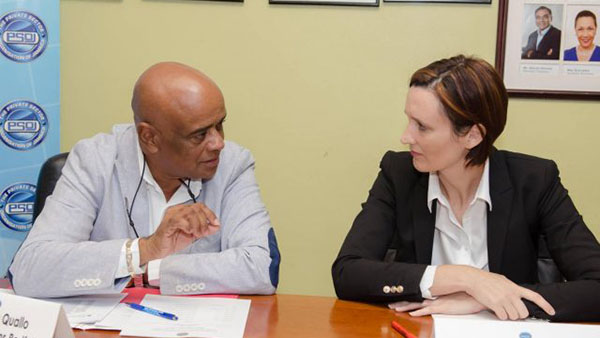 In this JIS file photo, then Deputy Commissioner of Police, George Quallo (left), is in discussion with Chair, Musson Foundation, Melanie Subratie, during the launch of the Violence against Children Reward Fund at the Private Sector Organisation of Jamaica’s (PSOJ) offices last year. Photo credit: JIS.

KINGSTON, Jamaica, May 11, 2017 (CMC) – Newly appointed Commissioner of Police, George Quallo, says members of the Jamaica Constabulary Force (JCF) must redouble their efforts in building good community relations, as this is still one of the most effective tools in crime-fighting.

Quallo, who was addressing the Jamaica Police Federation’s 74th Annual Joint Central Conference in the western parish of St James, yesterday, said that “now is not the time to abandon such a tried-and-proven practice, adding that “we risk giving up a huge advantage in taking the fight to the criminals”.

“My challenge to the superintendents, the inspectors and every rank and file member is for you to get back to the basics,” he said.

“Start to get back your feet fully grounded. Start to rebuild the trust and confidence of the people…. That is the only way they will feel comfortable to tell you what is going on,” he added.

Commissioner Quallo said he can recall, in the early days, when there were regular visits to schools by the police, and relationships were formed with the church, farmers and other interest groups.

“I remember when I was the commanding officer in Manchester, where there were many evenings when we would be up in the hills talking to the people,” he noted.

“What it did was allow us to build relationships, and the people would share with us what they know. There would be no protecting of criminals and wrongdoers. They would tell us what is happening in their neck of the woods. The school is no different and the church is no different. It is critical that we go back to basics and start rebuilding these relationships,” he said.

The commissioner called on members to support each other, while speaking out against wrongdoing.

Meanwhile, the commissioner expressed concern that persons who are up for promotions are being held back or stifled as a result of outstanding disciplinary matters that have been on the books for years, and with no resolution in sight.

“Many times, persons are nominated from their division for courses or to participate in promotion exercises, and what you hear is that the person has six or seven orderly room charges pending,” he pointed out.

“What I did…was sign a nice little thing and send it to all divisional commanders and formations to say that all orderly room matters, in excess of a year, must be withdrawn. I want to be clear. I am not saying all orderly room charges, as of now, that go beyond a year, will be withdrawn. This is a one-off thing, as we want to give everybody a clean slate to start all over,” the commissioner said.

Quallo took office, last month, as the 29th commissioner of police, amid a 21 percent hike in murders.

He has been charged with enhancing the security services, improving public order, reducing corruption, improving accountability across the force and implementing a comprehensive succession planning process for the Directorate of Constabulary.