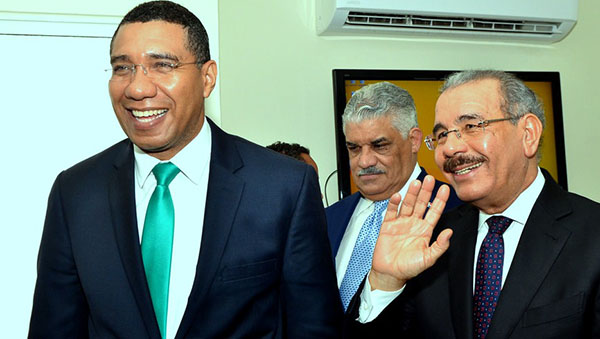 Jamaica And Dominican Republic To Boost Ties In Several Areas

SANTO DOMINGO, Dominican Republic, May 17, 2017 (CMC) – Jamaica and the Dominican Republic have agreed to increase trade, bilateral investment, cooperation in tourism and the training of teachers and students.

Medina also expressed interest in having a Tourism Multi-destination pact as soon as possible.

The leaders noted the importance of cooperation in transport links and discussed Jamaica’s plans to host the UN World Tourism Organization Conference on Sustainable Tourism.

They announced support for exchange programs on training, an initiative to be materialized with teachers and students from both nations, which aims to promote and develop skills in Spanish and English.

Holness expressed an interested in learning about the Dominican government’s social programs, especially affordable housing through public-private partnerships such as the sprawling Ciudad Juan Bosch, which can be applied to similar initiatives in Jamaica.

Meanwhile, president of the Roundtable of Commonwealth Countries in the Dominican Republic, Fernando Gonzales Nicolas, said Jamaica is one of the main business partners in the Caribbean.

Nicolas made the comment, on Tuesday, during a meeting with Holness and Dominican business leaders, adding that the visit reveals the “Jamaicans’ interest in bolstering political and trade relations with the country”.

He said there are significant Jamaican investments in the country in the financial and agri-business sectors, citing JMMB Bank and banana exporter, Jamaica Producers, while in Jamaica, Dominican investments include fertilizers and the biggest private power plant.

“It is important to remember that Jamaica is a member of the Commonwealth, that the Dominican Republic also participates with that nation in CARIFORUM, the Association of Caribbean States, among other associations,” said the president of the Roundtable.