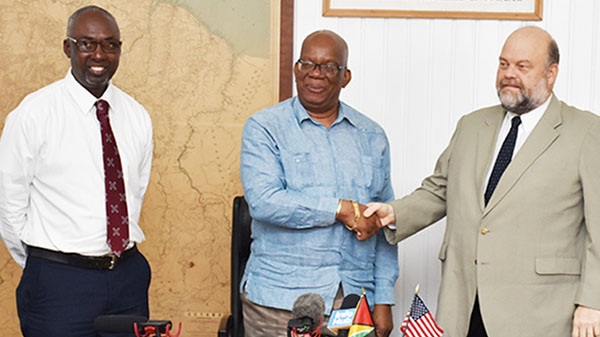 Guyana Gets Support From US To Strengthen Anti-money Laundering Regime

GEORGETOWN, Guyana, July 30, 2017 (CMC) – The United States has agreed to support Guyana’s anti-money laundering regime by covering the cost of the initial training and support service, required to implement a ‘ibase software program’.

This is in recognition of the role played by the Financial Intelligence Unit (FIU) in the fight against money laundering.

The training and support service will be facilitated by the International Business Machines Corporation (IBM) at a cost of just over US$30 million.

According Finance Minister, Winston Jordan, the ibase Software will enhance the ongoing fight against money laundering and terrorist financing, locally.

During a recent press briefing at the Ministry of Finance, Jordan said the scale of anti-money laundering and terrorist financing has risen, globally, and this has led to an increased macro-economic and national security risk in countries, where these illicit activities are prevalent.

Jordan said that the government of Guyana is aware of the need for improved data collection and management, from an array of pertinent sources, “and better an incisive data analysis to effectively monitor and identify red flags and suspicious transactions that warrant deeper investigation.

“Accordingly the government’s acquisition of the globally recognized ibased software, which was developed by IBM, will allow the financial intelligence unit to more easily map and import data and information from both structured and unstructured sources into the centralized repository. It will also help to hasten the pace at which data and information are analyzed, connections are found and actionable results are generated.”

He also noted that it will also facilitate comprehensive searches for intelligence in records, run complex queries on the data, and offer security, rich data access capabilities that will improve the data security integrity, and access.

The Finance Minister described the assistance as timely, noting that, “it underscores the value of meaningful partnerships in a collective fight, to rid the two countries of contaminated activities and transactions.

“Already, Guyana is suffering the effects of disquiets by several US-based banks. We are therefore comforted by gestures of this kind.”

US Ambassador, Perry Holloway, explained that once completed, FIU analysts will have the most up-to-date technology for detecting illegal financial activities, that will place the agency on par with their international counterparts.

The new initiative, the Ambassador said, will significantly enhance the capabilities of the FIU in Guyana, and its mandating mission of combating money laundering and terrorist financing, and protecting the local financing sector from being infiltrated with the proceeds of crime.

Meanwhile, Director of FIU, Matthew Langevine, said that the quantum of data that is received by the FIU, organizing and getting value out of that data received, is difficult given the limited human resources available and the lack of technology.

He said that the unit is excited about this tool being made available, and the impact it will have on the efficiency and its effectiveness.

Guyana remains in the fourth round of the CFATF evaluation process, which requires the country to demonstrate effectiveness of the AML/CFT regime.

This new initiative will help the country towards demonstrating that long term efficiency.