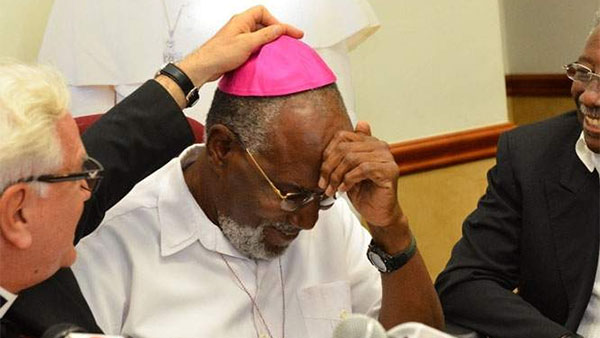 In a four-hour ceremony, held at Spice Basket, a cultural centre on the outskirt of the capital — and attended by a large number of people, including Governor General, Dame Cecile La Grenade; Archbishop Nicola Girasoli, Apostolic Nuncio to the Antilles; and Dominica-born Cardinal Kelvin Felix — Bishop Harvey urged the congregation to ensure they participate in the building of the Church.

“I pledge myself to Grenada and all of its people,” he said.

Prime Minister, Dr. Keith Mitchell, was absent due to illness, but at least 27 family members of Bishop Harvey, including two sisters, were in attendance. 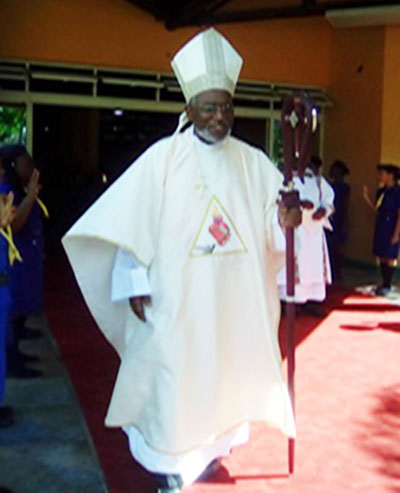 Harvey, 68, was described as a good shepherd, who cares for little people, by Archbishop, Robert Rivas, OP, Metropolitan Archbishop of Castries, who, in his homily, called on church members to love their new Bishop.

“The time has come to change gear and to recharge your batteries for action and, if they cannot be recharged, throw them out or get new batteries; but charge up, because it’s time for action,” he said, reminding the audience that the journey for the fifth bishop began when Bishop Darius died on April 26, 2016.

“The long-awaited day has come and I have journeyed with you during this period of time, during the sickness of your bishop and after his death, and I am glad to see this day. Love your new bishop as you loved Bishop Sydney Charles,” he added.

Charles, a Trinidadian, was appointed the third Bishop of Grenada, and served here from November 1974 until his retirement on July 10, 2002.

Archbishop Rivas said that the church in Grenada has been crying for a messiah.

“And now it has gotten its dream Bishop. Wipe your tears church, your time of joy has come, be strong, have good courage, a good leader has been given to you,” he said, reminding all of the work of Bishop Harvey and his outspokenness as a priest.

“His commitment to serve the poor and vulnerable will continue, you must find in him a model and an example for caring,” he said of Harvey, who was ordained as a priest in 1972, having entered the seminary of St John Vianney and the Uganda Martyrs in 1967.

Calling on Bishop Harvey to govern his congregation intelligently, Archbishop Rivas said, “Pope Francis has put his trust and confidence in you to lead the local church, rule wisely and with a gentle heart.”

Archbishop Nicola Girasoli was the main consecrator for the ceremony that was attended by bishops and priests from across the Caribbean, while the co-consecrators were Archbishop Joseph Harris, the Metropolitan Archbishop of Port-of-Spain and Bishop Charles.

In June, Bishop Harvey, who has devoted considerable amounts of his time to working with youth, who are actively involved in crime, was held up in his native country at gun point as he prayed at the Holy Rosary/St Martin’s Church in East Port-of-Spain.

A statement, issued by the Archdiocese of Port-of-Spain, noted that Harvey was tied up and robbed by three men, who threatened to kill him, adding that the priest managed to escape and made his way to a parishioner’s home, where he contacted Archbishop Harris and the police.