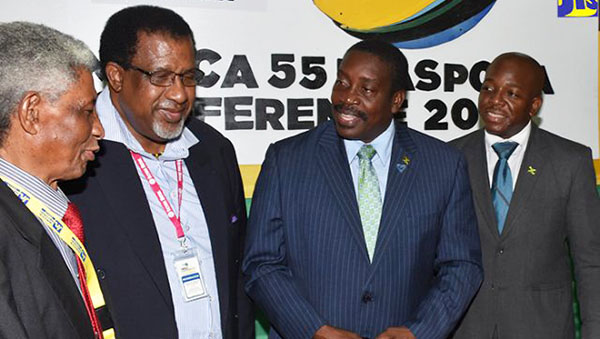 KINGSTON, Jamaica July 31, 2017 — Minister of National Security, Robert Montague, is reporting reductions in five of the seven major categories of crime for the first six months of the calendar year.

“When you aggregate all of the figures, overall there has been a five percent decrease in crime in 2017 up to June, compared to 2016,” he said.

“We have seen a decrease in aggregated assault by 15 percent; break-ins by eight percent; larceny by 32 percent; rape by 17 percent; and robbery by 26 percent. Where we have seen an increase is in shooting by 20 percent and in murder by 19.7 percent,” he indicated.

The National Security Minister said that every Jamaican must play their part in reducing crime and urged partnership with the security forces.

He noted that the government is taking a multidisciplinary approach to crime, which is anchored in five pillars – effective policing; crime prevention through social development; situational prevention; sure and swift justice process; and reducing reoffending.

“There is no quick fix in reducing crime, there is no instant solution, because there is no switch to turn crime on or off. We must unite as a people and engage in focused action against crime; we must help the police and not the criminal,” he said.

The biennial Jamaica Diaspora Conference was held from July 23 to 26 under the theme: ‘Partnering for Growth’.