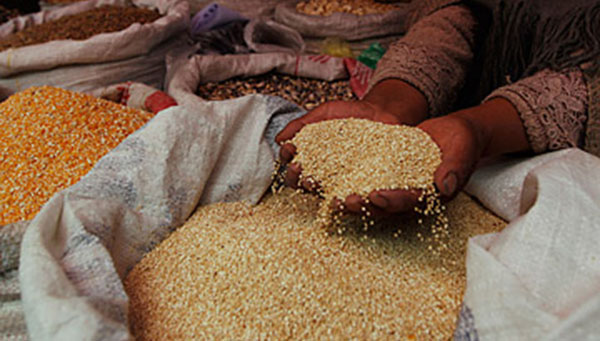 GEORGETOWN, Guyana, August 3, 2017 (CMC) – Trials to ascertain which areas in Guyana are conducive for the production of Quinoa, are likely to commence this September.

The National Agricultural Research and Extension Institute (NAREI), Felix Quinoa Farming Industry (FQFI), and the Food and Agriculture Organization are collaborating to make this a reality.

In July 2015, FQFi, a US-based corporation, signed a Memorandum of Understanding (MOU)with the Ministry of Agriculture, outlining areas of partnership for the introduction and production of Quinoa, to Guyana’s other crops sector.

FQFI was formed in response to a call made by the United Nations to introduce Quinoa, a sustainable food, in developing countries by 2020, in light of the negative effects of climate change on agriculture.

According to Homenauth, NAREI and, by extension, the government of Guyana, is committed to the introduction of Quinoa to Guyana.

He recalled that Minister of Agriculture, Noel Holder, had announced, during his National Budget 2017 speech in the National Assembly, that Guyana would be introducing this new crop

According to CEO and President of FQFI, Joan Perry, the organisation has partnered with experts on Quinoa at the University of Maryland and Brigham Young University in the United States.

Perry said that FQFI is seeking to have Quinoa grown on a large scale in Guyana, with the involvement of other farmers, and already has a list comprising over 150 persons who are willing to cultivate their lands with the crop.

She expressed confidence that Quinoa – a resilient crop that can be consumed in a variety of ways – could be the next leading crop in the country.