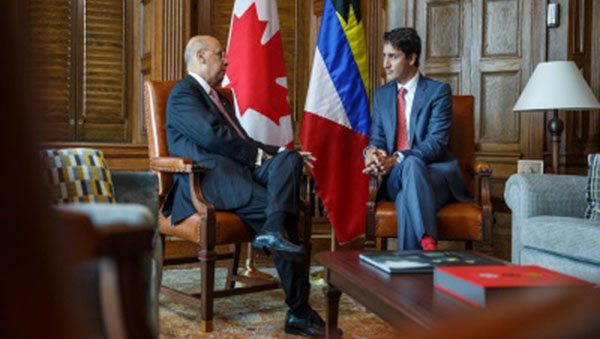 A government statement said that the island’s Ambassador to the United States and the Organization of American States (OAS), Sir Ronald Sanders, on Monday, met with Canadian Prime Minister, Justin Trudeau, as the non-resident High Commissioner.

Sir Ronald presented a letter from Antigua Prime Minister, Gaston Browne, to Trudeau, and according to the statement, he later “discussed a number of matters of interest to both countries, including the effects of climate change and global warming”.

The recent requirement for visas for Antigua and Barbuda passport holders to travel to Canada was also discussed.

“High Commissioner Sanders put a proposal to Prime Minister Trudeau for a mechanism to issue visas that might be less burdensome and more time saving than the present arrangement,” the statement said, adding that Trudeau “undertook to request his officials to look into the proposal”.

The statement said Canada and Antigua and Barbuda have “a long history of friendship and cooperation at both the bilateral and international levels”.

Trudeau and Sanders agreed that the traditional close relations between the countries is “a strong basis for exploring new ways of cooperation,” the statement said.