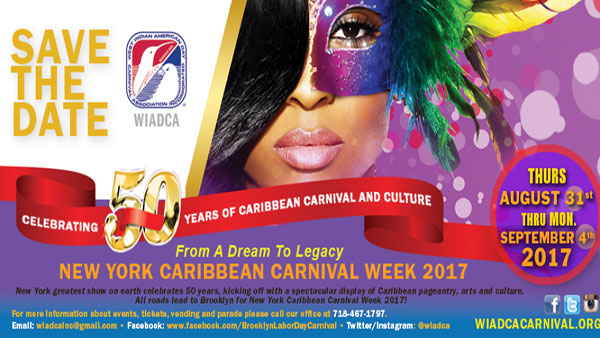 Masqueraders from several mas camps, as well as carnival lovers, officials and legislators, converged on the Brooklyn Children’s Museum for the grand celebration, held under the theme, “From a Dream to a Legacy.”

“It’s good that we got to the 50th anniversary,” costume-clad Trinidadian Kay Mason, described as the “Queen of Labor Day Carnival,” told the Caribbean Media Corporation among the gaiety.

“I want to thank WIADCA for their organization over the years,” added Mason, who won WIADCA’s Carnival Queen nine times and was five times “Queen of the Bands” in Trinidad and Tobago Carnival.

“It’s a milestone to bring this culture together, so we can celebrate,” continued Mason, representing perennial West Indian American Day Carnival Parade’s Band the Year Champions, Sesame Flyers, who was honored by WIADCA in April.

“This is my first year and, so far, so good,” said Giselle Thomas, the Trinidadian designer of Amezilia Costumes. “It’s very interesting.”

Caribbean American Congresswoman, Yvette D. Clarke, perhaps, spoke for the Caribbean community in New York, stating that it was “important that we stand with pride.”

Later, in her brief remarks, the daughter of Jamaican immigrants, who represents the predominantly Caribbean 9thCongressional District in Brooklyn, led the audience to a chant of “Get out the Vote,” while calling for President Donald J. Trump’s ouster, with the refrain, “As soon as possible.”

WIADCA’s president, William Howard, assured the effervescent crowd that “you’ll have a good time [during the Carnival Parade on Eastern Parkway on Labor Day, September 4]. We’ll see you for Labor Day”.

Stephen “Ragga” Marley is also expected to appear on Thursday, commemorating his father’s [Bob Marley] visit to the same Brooklyn stage, where Marley debuted “Uprising”, “and expressed enthusiasm and support for WIADCA’s efforts in bringing the community together, by promoting diversity and tolerance through music and culture in NYC,” WIADCA said.

Music for the Brass Fest will be furnished by DJ Sounds 4 Life, DJ Starboy Movements and DJ Spice.

The Junior Carnival and Panorama take place on September 2.

The Dimanche Gras finale to be held the following day will feature The Calypso King of the World – The Mighty Sparrow; Calypso Queen of the World – Calypso Rose; King David Rudder; Swallow from Antigua and Barbuda; Ras Iley from Barbados; and Dane Gulston, steel pan virtuoso, along with the King & Queen of the Bands costume presentations.

“We are blessed to have marked 50 years of Caribbean impact, culture, education, economic contribution, services and carnival in New York State,” Howard said. “This year, we celebrate our long-standing partners and welcome new ones that will help sustain this legacy for the next 50 years.”

“We look forward to a diverse, inclusive and bright future, as we welcome new members and volunteers from all walks of life, and celebrate our stalwarts,” he added.

For the fourth year, WIADCA said it will also have Junior Parade Grand Marshals.

Caribbean carnival was officially established on Lenox Avenue in Harlem by Trinidadian Jessie Wardell and friends in the mid-1940’s, according to WIADCA.

But WIADCA said that Wardell and some of her West Indian friends started the Caribbean festival in Harlem in the 1930’s by staging costume parties in large enclosed places, like the Savoy, Renaissance and Audubon Ballrooms “due to the cold wintry weather of February.

“This is the usual time for the pre-Lenten celebrations held in most countries around the world,” WIADCA said. “However, because of the very nature of carnival and the need to parade in costume to music, indoor confinement did not work.”

WIADCA said the earliest known carnival street activity was held during the 1940’s, when Wardell secured the first street permit for a parade-type event on the streets of Harlem.

Lezama nurtured the organization and carnival celebrations until 2001, when, due to his ill-health, he retired, and his daughter, Yolanda Lezama-Clark, a registered nurse, served as president until 2011.

Trinidadian Thomas Bailey was elected president in 2012 until he was replaced by African American Howard, considered a long-standing friend and die-hard supporter of the Caribbean community in New York.

Lezama was widely credited as the “Father of Brooklyn’s Caribbean Carnival.”

“Today, those values still remain the focal point for WIADCA, while bringing together over 1.5 million visitors to New York from around the world to participate in the annual West Indian Carnival Parade on Eastern Parkway in Brooklyn on Labor Day,” WIADCA said.

It said its mission is to “promote, develop and celebrate West Indian/Caribbean culture, arts, history and traditions through year-round programs to expand our cultural reach throughout the world, which culminates with a week-long display of festivities and a grand finale Carnival Parade.”

WIADCA is a non-profit, tax-exempt organization comprising “experienced and skilled business and community representatives from within the [New York] tri-state area, many islands and the U.S.A.”

The five-day festival begins at the Brooklyn Museum grounds from this Thursday – before Labuor Day – through the weekend, culminating in the spectacular and massive New York Caribbean Carnival Parade on Eastern Parkway in Brooklyn.

New York’s Caribbean Carnival Parade has grown over the years from thousands of participants and tourists to over three million spectators.

WIADCA said the influx of tourists from all over the world has benefited New York City on “an economic level, most recognizably with large corporations, small businesses and the tourist/service industries.”