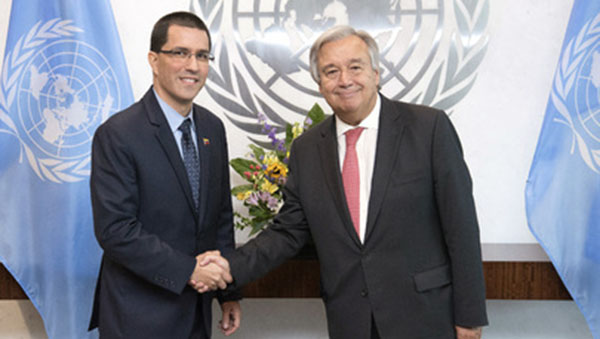 UNITED NATIONS, New York August 30, 2017 (IPS) — After sending a team to investigate the human rights conditions in Venezuela amid growing political and economic crisis, the UN Human Rights Office has reported that the crushing of anti-government protests point to the “the existence of a policy to repress political dissent and instil fear in the population to curb demonstrations.”

After being repeatedly denied access into Venezuela, the UN sent a team to monitor the situation remotely. After investigating protests from April 1 until 31st July, the team recorded that the security forces and armed colectivos, a pro-government armed group, were responsible for a total 73 deaths or half of all 146 deaths that the team opened investigations into.

The report also sheds light on the gradual escalation of violence, as injured persons in the first half of April reported inhaling tear gas, and by the end of July, came in dozens to treat injuries from gunshots.

As the report clearly outlines Venezuela’s spiral into crisis by continuous use of attacks against peaceful protesters by government forces, the UN High Commissioner for Human Rights Zeid Ra’ad Al Hussein has stressed on the importance to curb this mishandling of power.

“The right to peaceful assembly was systematically violated, with protestors and people identified as political opponents detained in great numbers. The report also identifies serious violations of due process and patterns of ill-treatment, in some cases amounting to torture,” Zeid said.

International pressure, however, has worked to some effect as many detainees, who numbered as many as 5,000 in the beginning of April, have been freed. Still, more than 1,000 are reportedly detained. In addition, 609 civilians have been tried in military courts, instead of ordinary courts.

Besides the use of deadly force, many witnesses gave firsthand accounts of the violence, citing cases where the security forces deliberately fired tear gas at short range, or threw nuts and bolts directly at them. Numerous instances of illegal house raids and unlawful torture of detainees have also been reported.

The breakdown of law and order, with violence primarily attributed to the National Guard and the National Police, has picked up pace in August.

Recent measures like criminalising leaders from the opposition through the newly established Commission of Truth, Justice, and Peace have raised concerns about the partisan nature of inquiries into preventing further violence. This new commission was recently installed by the controversial Constituent Assembly.

Zeid cited the deterioration of conditions in the country and encouraged the government to follow up on the report published by the UN and make conscientious enquiry.

“I encourage the Venezuelan Government to follow up on the recommendations made in the report and to use its findings as guidelines to seek truth and justice for the victims of human rights violations and abuses. I once again call on the government to renounce any measure that could increase political tension in the country and appeal to all parties to pursue meaningful dialogue to bring an end to this crisis,” he said.