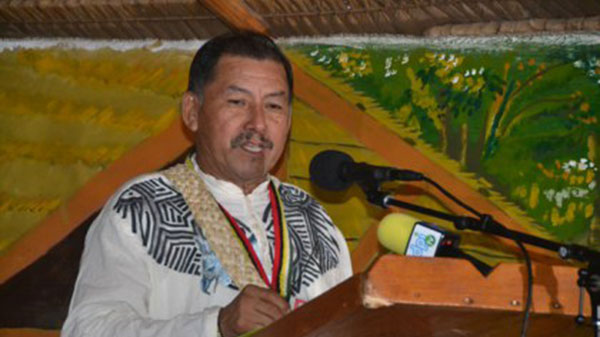 Indigenous Languages To Be Taught In Schools In Guyana, Says Minister

BROOKLYN, New York, September 3, 2017 (CMC) – Minister of Indigenous People’s Affairs, Sydney Allicock, announced that President David Granger has requested that the languages of the Indigenous peoples of Guyana be taught in schools.

The Minister made this statement, last Thursday, during the Dr. Desrey Caesar-Fox Memorial Lecture at the Guyana Folk Festival in Brooklyn, New York.

He explained, “With language, if our indigenous people do not know their language they are not complete. Language is the identity; language helps us to understand the laws of nature which allows us to have an environment that has a healthy eco system.”

The lecture, which was held at the St. Stephen’s Lutheran Church, in Brooklyn, had an impressive turnout, as Dr. Walter Edwards, the founder of Amerindian Languages Project (ALP), gave a comprehensive overview of the project, elements of understanding the Indigenous language as opposed to English, and Dr. Fox’s vital role in what is known, today, as the “Indigenous Languages Project” at the University of Guyana.

The project, which was founded in 1977, originally had a team of 15 persons. Dr. Caesar-Fox was the first Amerindian research assistant recruited and attached to the special project.

Dr. Edwards remarked that her contribution was “Superb.”

He explained that “a vast majority of the ALP’s work has been erased from the record of the current Amerindian Research unit, which owes its existence to the ALP”.

The memorial lecture discussed the structure of the Akawaio/Arecuna languages; the phonological, grammatical, economic activities of the people; and the roots of the languages.

Dr. Edwards, now a linguistics professor at Wayne State University, said he aimed to use “the linguistics information garnered from these descriptions to reveal to teachers of Amerindian children and to educational policy makers, the major linguistic and cultural differences between English and these languages”.

“Dr. Fox, sadly, did not finish her journey,” Minister Allicock said, noting that she will be remembered for her invaluable contribution to Guyana’s history. She was the Minister within the Ministry of Education, for four years (2006-2009) and died in an accident in 2009.

The government of Guyana has renamed the Waramadong Secondary, in the Upper Mazaruni, as the Desrey Ceasar-Fox Secondary school, in honour of Dr. Ceasar-Fox.