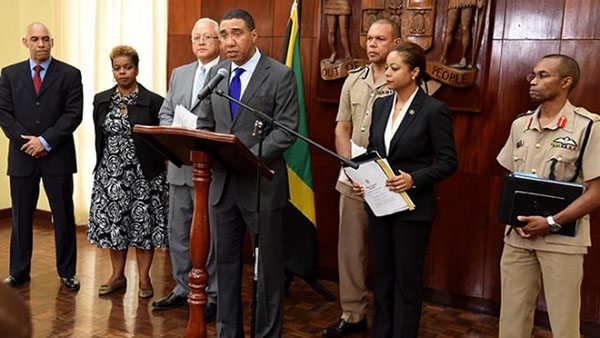 Holness, speaking at a news conference here, said that under the Law Reform (Zones of Special Operations) Special Security and Community Development Measures) Act, members of the Jamaica Defence Force (JDF) and Jamaica Constabulary Force (JCF) are now in the zone, which will operate for 60 days.

He called on all citizens to fully cooperate, noting that no community will be allowed to operate as a safe haven for criminals.

“We will establish and restore public order, citizen security and public safety. We will make Jamaica safe again,” he said.

The Act gives the Prime Minister, in Council, the authority to declare an area as a zone of special operations.

The zones will be operated by a Joint Command of the Jamaica Defence Force and the Jamaica Constabulary Force. The prime minister, in Council, after consultation with the Joint Command, may request of Parliament an extension of the zone.

Figures released by the JCF showed that up to last weekend, a total of 1,005 people were killed across the island this year, a 24 percent increase, or 197 more than was recorded for the corresponding period last year.

The statistics also showed that 114 people were murdered across Jamaica over a 20-day period that ended last Saturday.

Last year, the island recorded 1,350 murders, with the police claiming then, that 65 percent of these murders were linked to gangs.

Early last week, Prime Minister Holness met with the Police Commissioner, George Quallo, and senior JCF commanders, as they examined the expectations ahead of the implementation of the Zones of Special Operations.

Major, Godfrey Sterling, of the JDF, and Superintendent of Police, Kirk Ricketts, are jointly in charge of operations in the Mount Salem special zone.

Managing Director of the Jamaica Social Investment Fund (JSIF), Omar Sweeny, has been named Deputy Chairman of the Social Intervention Committee, which is to be established within five working days.

Holness said the decision to declare Mount Salem as the first zone was based on police statistics, which show that the area is a major crime hotspot.

He said the JDF and the JCF had made a written request for operations in Mount Salem, and that all weapons to be used in the zone have been registered with the Institute of Forensic Science and Legal Medicine, and the members of the security forces, who will be conducting operations, will have their names and badges fully displayed.

In addition, the National Security Council will convene to receive and consider the written report of the Joint Command that must be submitted every 10 days.

The Prime Minister will update the nation by making a statement to Parliament, within 14 days, in accordance with the law.

Holness noted, that while the joint forces will have special power under the law, it is not to be arbitrarily used, and measures to prevent abuse of citizens are in the legislation governing the operation of the zones.