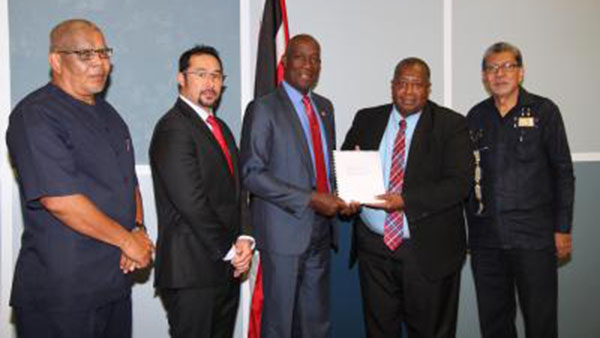 PORT OF SPAIN, Trinidad and Tobago, September 3, 2017 (CMC) – The Trinidad and Tobago government has announced a new Board of Directors for the state-owned oil company, PETROTRIN, saying that the cash-strapped company would also be restructured.

Prime Minister, Dr. Keith Rowley, speaking to reporters before his departure for the United States, said that the company is saddled with a debt, estimated at US$850 million, that’s due in 2019 and which, at present, it cannot pay.

Rowley said Cabinet took a decision, on Wednesday, to install a new Board, with a mandate to make the company sustainable, to work towards profitability, and restructure it in the best interest of the national community, taking into account all the competing interests and challenges.

It will be chaired by businessman, Wilfred Espinet, and Rowley said the nine-member Board had been “carefully selected”, including a mix of private and public sector , who are very experienced in their various endeavours of business, including working within PETROTRIN.

“We are hoping, that within a period of two to three years, we can turn around the arrangements at PETROTRIN so that company can get out of, or at least be on a path towards making a contribution of its promise,” Rowley said.

He said that a committee had been established to look into the company’s affairs and a report has since been submitted to Cabinet.

“On Wednesday a decision was taken to begin the process of restructuring PETROTRIN, by converting PETROTRIN, in the shortest possible time, from being a ward of the State to a company that, not only conducts a stable business but conducts business as profitable, and will continue to contribute profits to other benefits of national improvement,” said Rowley.

He said this requires certain resolutions, robust examination, and a certain amount of acceptance, as the situation is “very serious”.

The Prime Minister said that the oil company has incurred significant liabilities in the form of “huge debts”, which the government cannot now discharge, and that PETROTRIN has been suffering numerous challenges as its oil production has been falling, considerably.

He told reporters that its infrastructure is “very worrisome”, as it is outdated and could see significant problems arising with safety.

The Oilfield Workers Trade Union (OWTU), which has been calling on the government to restructure PETRIOTRIN but not to divest the company, said it would issue a response to Rowley’s announcement, on Monday.

Rowley also commented on the “dire situations” facing state enterprises, including the Water and Sewerage Authority (WASA) and the Trinidad and Tobago Electricity Company (T&TEC).

He said WASA’s payment to its supplier of desalinated water put it in a financial situation, which realises the concerns they had, when the company entered into the process of desalination, as a means of supplying water to the country.

He said T&ETC owes the National Gas Company (NGC) billions of dollars and cannot pay at this point in time and, if not paid, will leave the NGC with a bottom line that could “reflect itself in the red”.